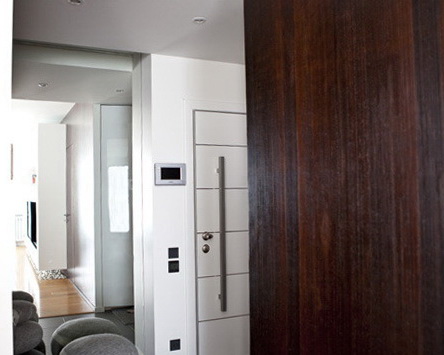 Alexander purchased an apartment in a house under construction on Vernadskogo prospect about three years ago: he was attracted by the district convenient location and many educational institutions for children nearby, taking into account their plans for future. The repair in a free concrete perimeter with two loggias lasted eight months after the construction had been finished. The couple determined the stylistic direction of their future dwelling at once – a minimalist uncluttered interior, airy and open space. 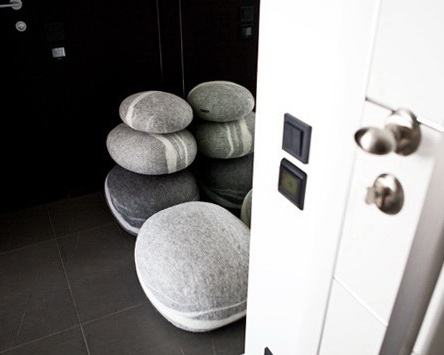 Elena, an architect by education, found Alexey Nikolashin’s bureau upon the recommendation of her friends. Finally the owners and architects understood each other very quickly: they set necessary functional requirements to the dwelling and correlated views on aesthetic constituent, in which photos, collected by Elena on Contemporist site, helped. So, a tandem appeared: Elena cooperated with architects in the way of the interior actively and brought her ideas in the project, and Alexander helped with engineering. The point of microclimate became particularly topical, when one of the walls turned into a panoramic window, where the sun shines all through the day, after joining of two loggias to the living space. 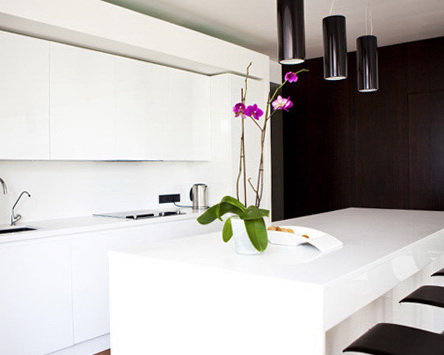 The central space in the apartment is the living-room combined with the kitchen zone. There is a small housekeeping area behind glass doors opposite the corridor. Alexander’s hockey kit is kept here.

The stack built into the wall was made from architects’ scratch. A bio fireplace Planika is built into it besides the TV set and a cabinet for equipment. A well-known floor lamp Flos performs a decorative function – it has not been turned on for a year already. 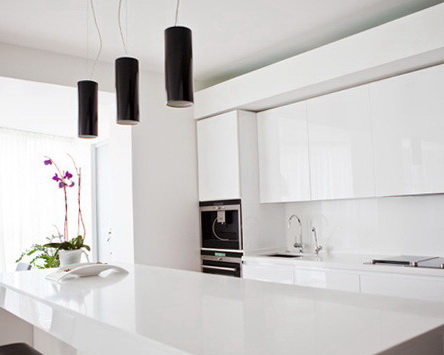 The owners kept the idea of pebbles suggested by Alexey Nikolashin with decorative poufs.  A coffee table is BoConcept, the sofa is Flexform. 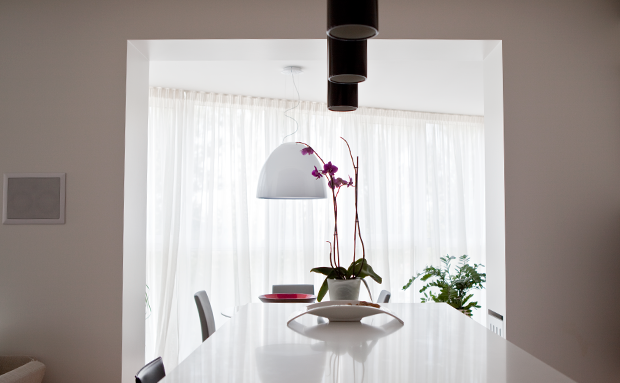 Italian kitchen with smooth glazed surfaces and a kitchen island with Corian tabletops were made to order. The lamps are Artemide, the chairs are Lapalma.  The table with a marble tabletop is Alivar. The chairs are Bross. The plate was brought from Spain by friends. 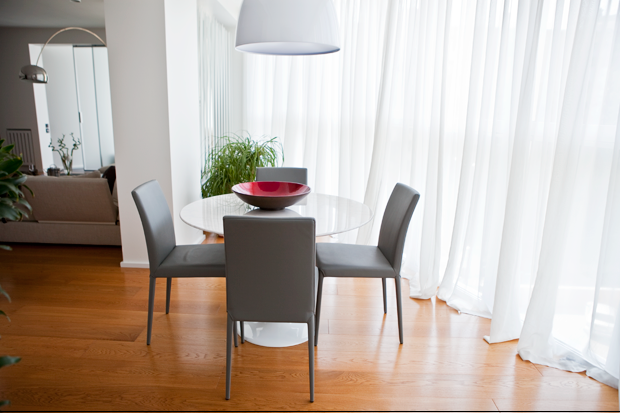 Elena uses the room behind the glass wall as a workshop for painting, but in future the room will be the children’s room as it was suggested in the project.

There is a small wardrobe room behind the dark veneer wall.  Elena brought black lamps for bedside tables Flexform from Paris. 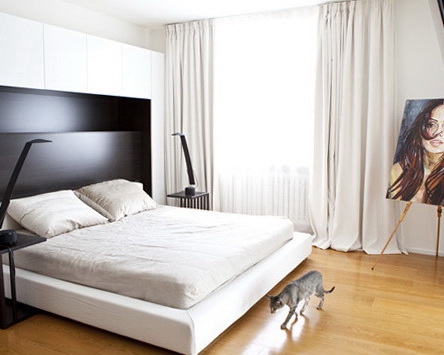 If desired the TV set hung on the bracket can be rotated and one can watch the film lying in the bath. There is a hostess’ self-portrait on the easel. 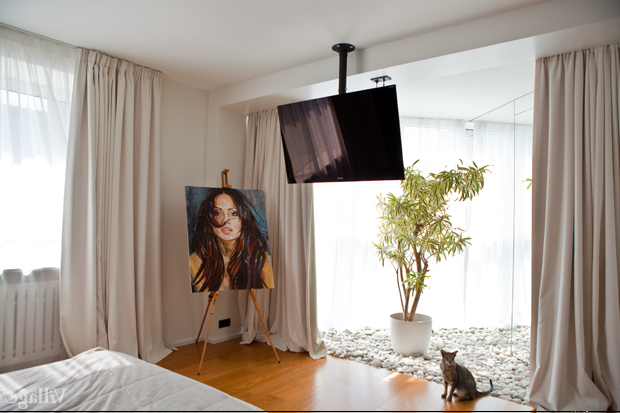 The pebble theme adding harmony to the interior is continued in the bedroom. The mirror wall in the natural corner increases its area visually. 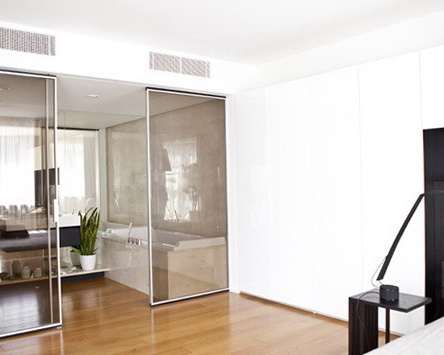 The bathroom is the only place in the apartment where the ceiling was lowered, because the ventilation and a duct air-conditioning system, designed and installed by “Moscow Engineering Center”, were inbuilt there. 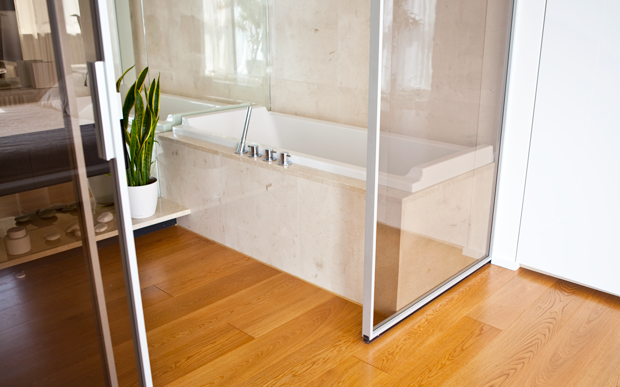 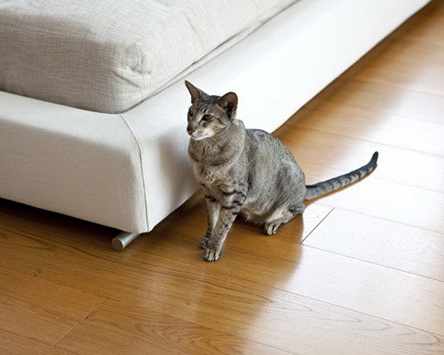 The pet which has already got into the shot is Oriental cat Kuzya. Floors in all apartment are natural oak parquet board. 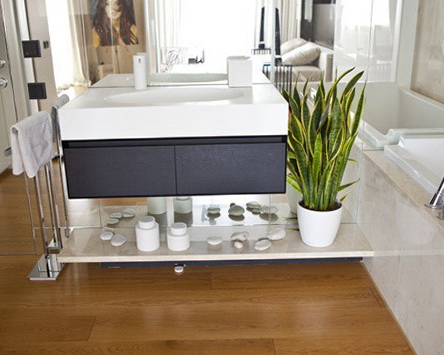 Natural marble was used in the finishing of the bathroom and shower room. According to owners’ words its dissimilarity from artificial substitutes is particularly essential in such conditions: it is warmed differently and tactile sensations are much more pleasant. The bath itself is Duravit. 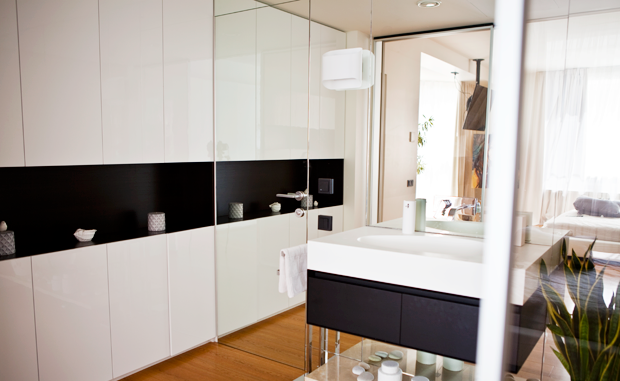 The table for the sink is Antonio Lupi. 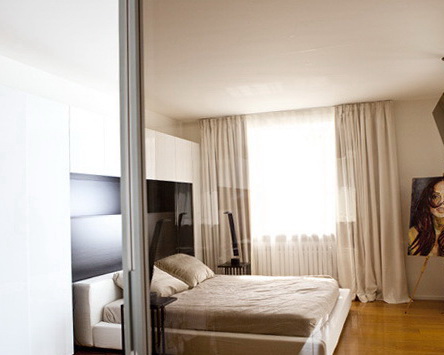 There is one more room with rain shower behind the glass door on the right side of the sink.