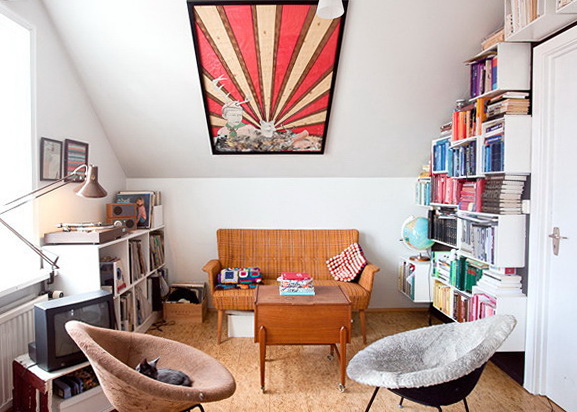 Oyvur purchased her first apartment in Reykjavik when she decided to move from her parents. Search criteria were simple: location in the central district 101, within walking distance from the university, and necessarily with the attic which can be transformed into the bedroom.

Searches didn’t take much time, furthermore this offer was the cheapest among all other offers. The apartment location is almost ideal. There is a small store Drekinn just below windows, where essential products are sold, and potato and hamburgers are grilled, and there is a coffee bar Kaffismiðja across the street, where one of the best coffees is made. One can reach a low-cost grocery in three minutes, which is by no means unimportant for the center of Reykjavik, and the windows face the ocean and the main sight of the city – Hallgrímskirkja church. 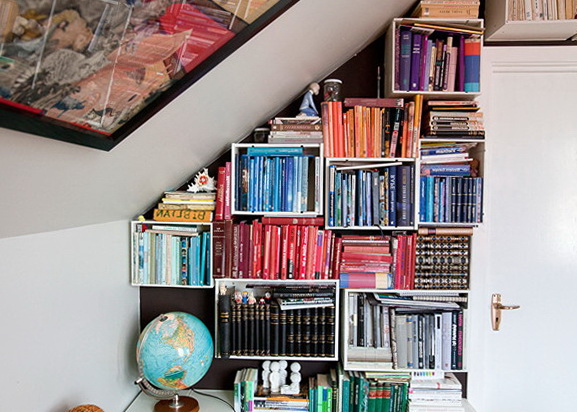 The apartment didn’t need any large-scale redesign. Though wooden trimming was bleached-out and painted in the attic, so that it would’t remind of a country house as the hostess explains. Oyvur found part of the furniture at jumble markets and in second-hand stores, something was made by herself and some things were presented by friends and by her grandmother. 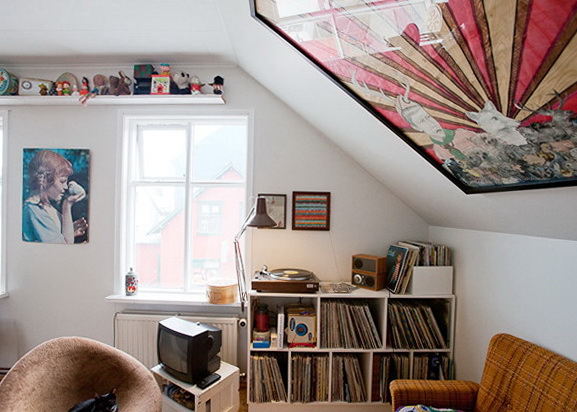 Oyvur made bookshelves in the living-room from wooden boxes for wine bottles, and the cabinet for vinyl records collection was made from a piece of wood panel. The drawer unit for the TV set was found in the street: it didn’t need to be painted, only rollers were to be fastened. 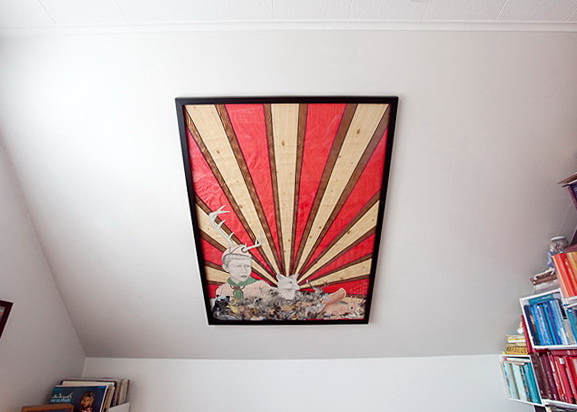 The collage over the sofa was presented to the hostess by the Icelandic paintress Ingibjörg Birgisdóttir for a graduation from the university. The drawing from the right over the record player and the picture over the bed in the attic are by her authorship too. 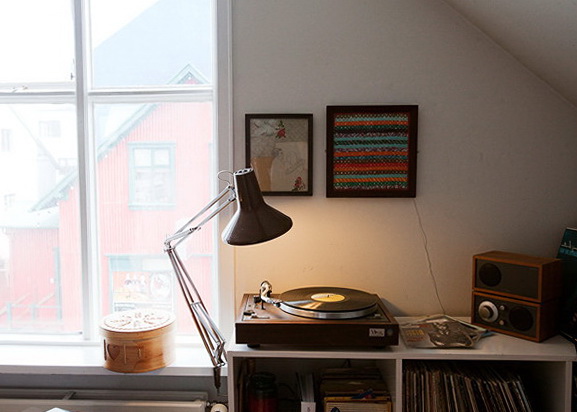 The old poster of the film “Pippi Longstocking” was also found in Góði Hirðirinn. Oyvur fastened a long shelf over the window by herself: “It is difficult to find enough space to store duffers, when you live in a small apartment, so it wouldn’t be superfluous to use its all free space”. 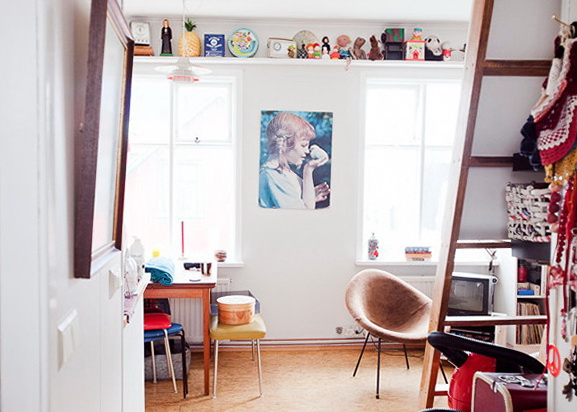 Oyvur had worked in Góði Hirðirinn second-hand furniture shop for some time. This is the main place for all collectors and lovers of second-hand articles in Reykjavik after Kolaportið jumble market. A gramophone, a coffee-table, part of vinyl collection are from there. The most part fell from parents – for instance, collections by Bob Dylan and by David Bowie. Icelandic records are usually presented by musician-friends. 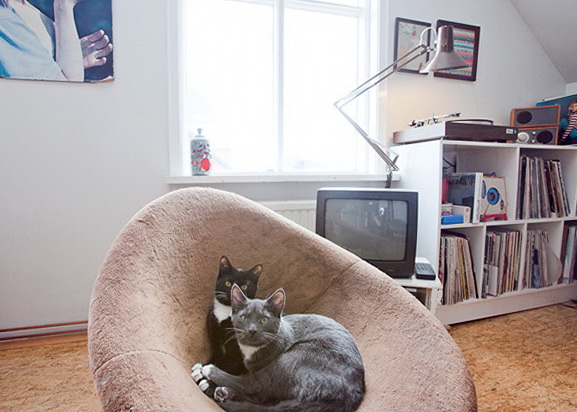 A wooden box on the window sill was made and presented to Oyvur by her father on the occasion of move. This is a special container for storage of the traditional Icelandic Christmas bread Laufabrauð. 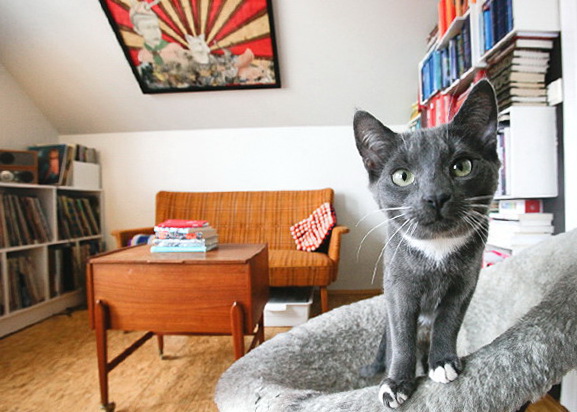 Armchairs in the living-room are called Sindrachair. This is a real Icelandic vintage by the designer Aurni Einarsson. Such chairs were popular in the 60s. The first chair upholstered with sheep wool fell from her grandmother, who moved into a new house in those times and ordered the furniture by a catalogue as Oyvur says. She had luck to get the second one at a jumble market for 500 krona (about 120 roubles). 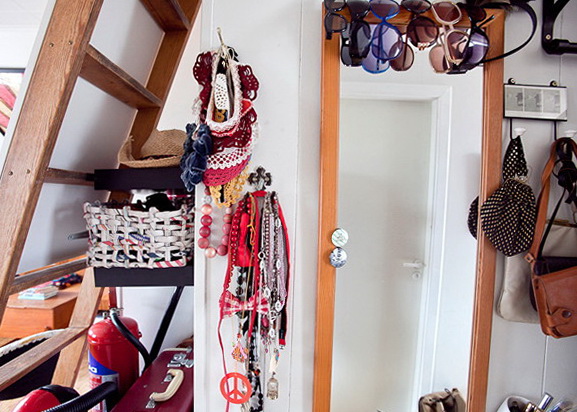 There are old Icelandic photos bought at a jumble market, maps of favourite cities, souvenirs, post cards and just appealing pictures in the entrance hall on the stairs. There is a faded photo of Icelandic feminist movement icon, the former president of the republic and the first woman at this post – Vigdís Finnbogadóttir – over the stairs. 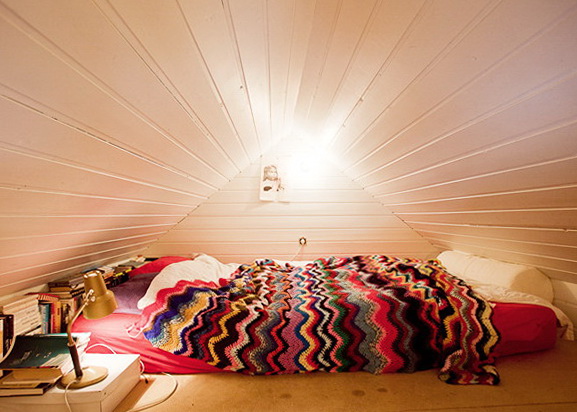 The bedroom in the attic was nearly the main Oyvur’s requirement when she was searching for the apartment. She painted the walls by herself, but she can’t find time to make the window in the roof: it is warm and comfortable in the attic in winter even without radiators, but it is a little stuffy here in summer. 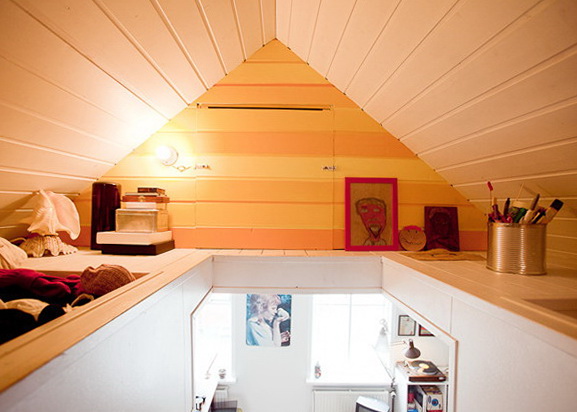 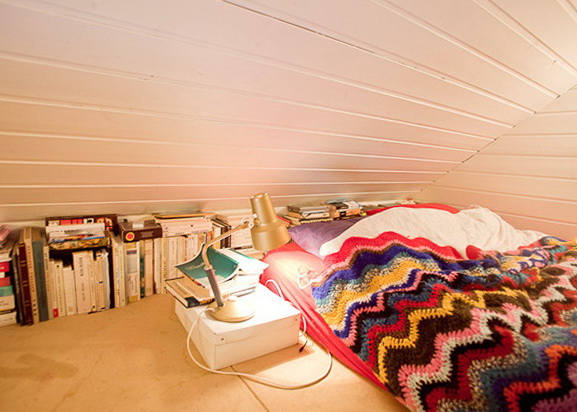 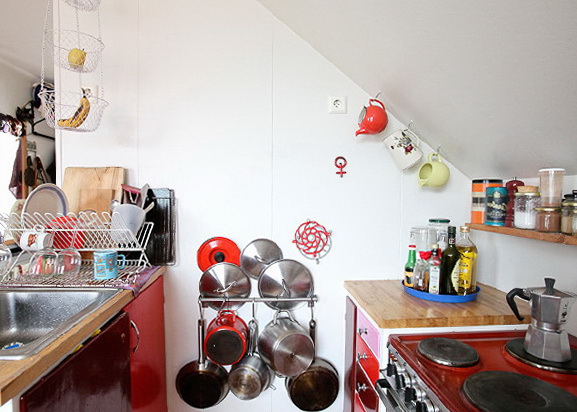 Oyvur tries to use every centimeter in the kitchen, that’s why there are shelves even in the narrow space between the wall and the refrigerator. Initially there was only a cooker and a complete kitchen, which was painted red and pink by the hostess at once, in the apartment. The cooker appeared to be from the same series as the old refrigerator. The most expensive kitchen appliances were presented by Oyvur’s father. Cans and glass bottles were found in the second-hand store. “Mirror of Venus” on the wall reflects the hostess’s feminist looks. 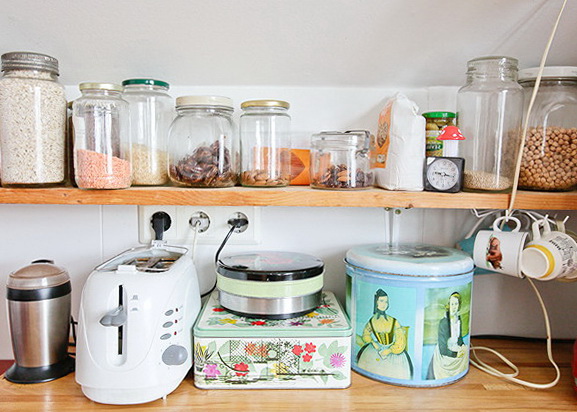 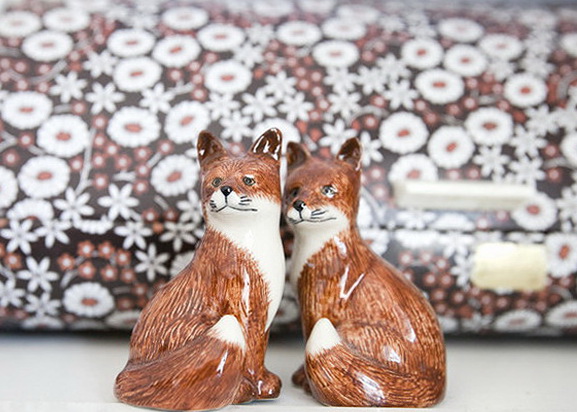