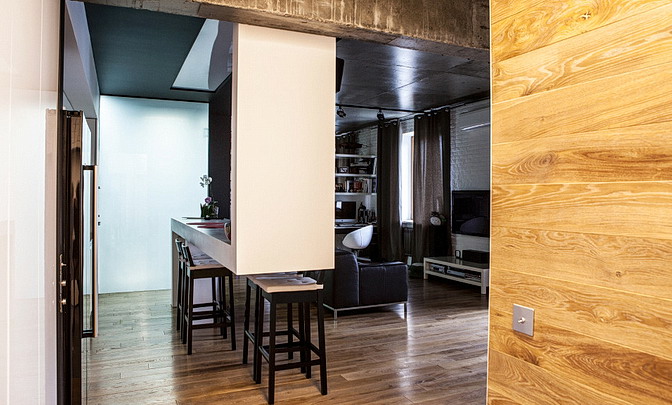 A two-room apartment in industrial style with concrete ceilings and glass partitions.

Vitaly and Alena moved into their “almost loft” in Kurkino two and a half years ago. They were attracted by a well-developed infrastructure, ecological cleanness, and a low building density of this district, located in the north-west of Moscow just outside the Moscow Ring Road and designed according to all rules of scientific urban planning at the time.

The repair lasted for almost a year. There were no bearing walls in the apartment – only some pylons and other technical elements like risers hinting at the designed typical zoning. As a result all spaces were located otherwise. Planning and interior projects were developed by Alexey Nikolashin, an architect. The owners entrusted their apartment to Alexey on their friends’ advice and after they had got to know his works in the Crimea.

The owners saw their future apartment opened to the utmost. Though, they had to drop an idea of the loft in the full sense of the word: the bedroom was separated with a glass partition. Industrial aesthetics is kept in the interior. Oak parquet blended in with it and it is used in the finishing of maintenance block in the entrance hall. 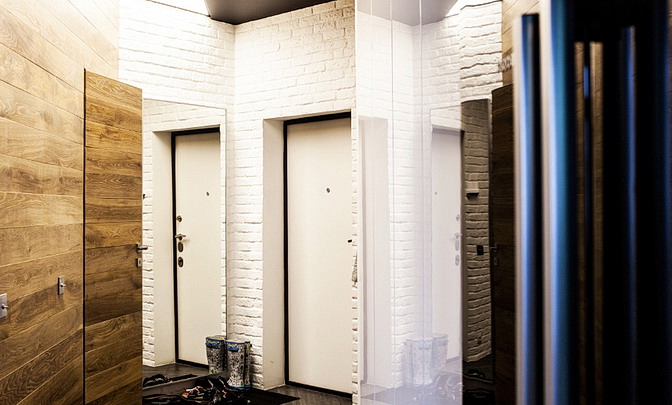 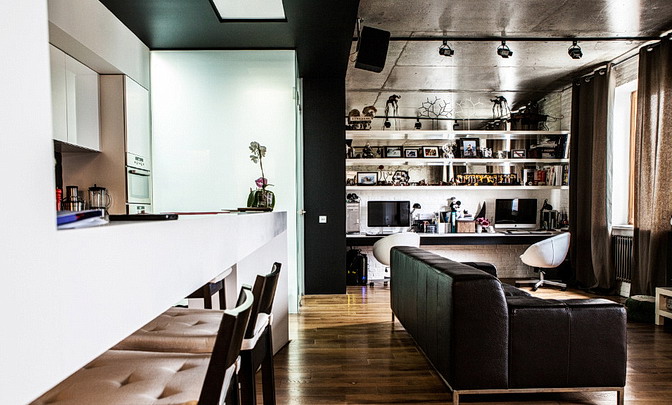 The basic space combined the living-room, working, and kitchen zone, and this enabled to make the premise opened and functional to the utmost at relatively small metric area. 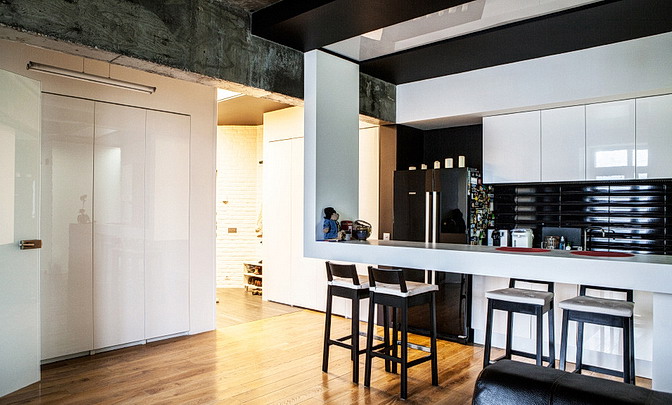 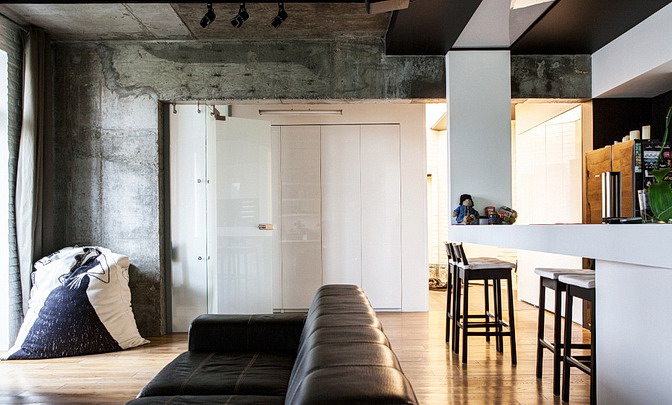 Restraint of European minimalism with the use of geometric forms and smooth surfaces harmonizes with industrial style elements. For instance, concrete slabs on the ceiling were left in a state of nature, unless that they were covered with a special solution with laquer. 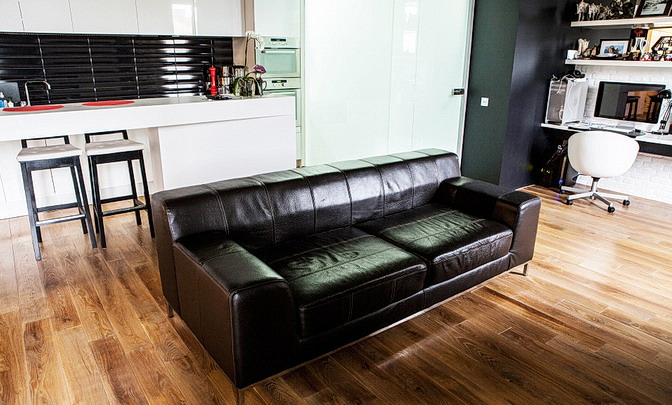 Almost all furniture in the apartment including built in white wardrobes, a sofa, chairs, work chairs, and shelves are from Ikea. 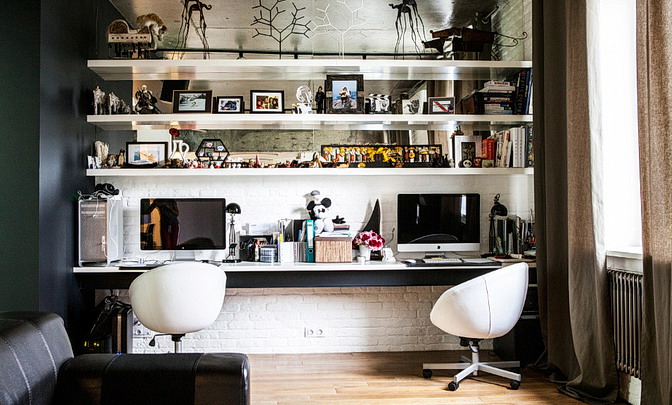 An iron beam was installed as a support for working surface. The tabletop from Ikea was laid on it. 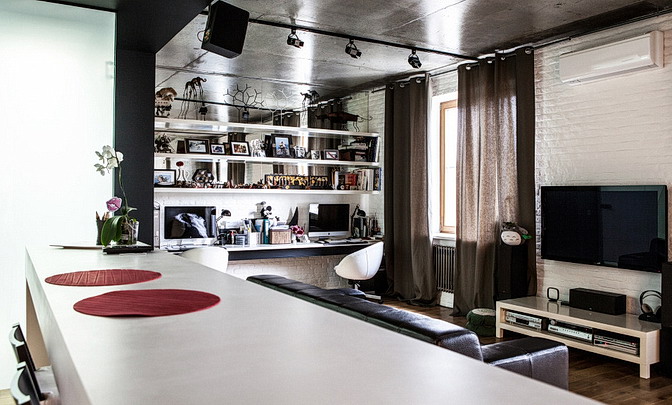 Lamps giving warm point light are an inexpensive and practical finding of Vitaly: no lamps were replaced in theatrical searchlights on railings for several years. The general stylistics is supported by radiators Zehnder and eyebrows from iron pipes. Visual borders of the unified space are set by geometrical construction – a bar counter from Corian made by the company “New Project” from the architect’s scratch. 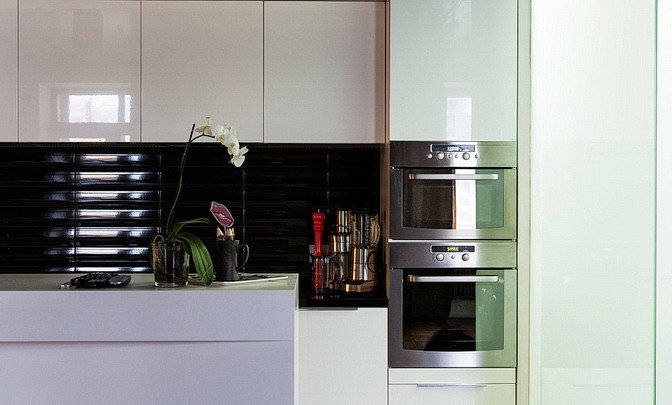 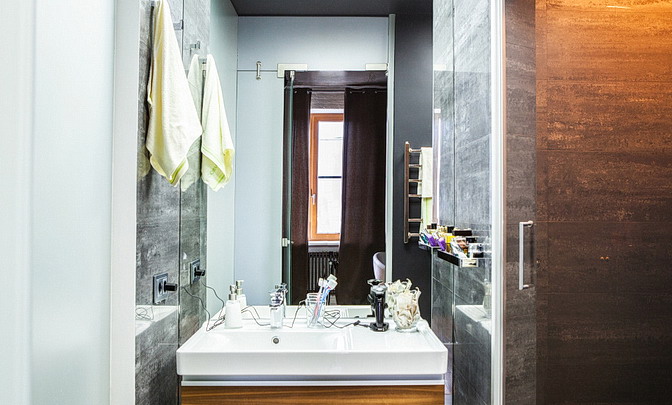 A case for the sink and sanitaryware are Ideal Standard. The tile is Rim. 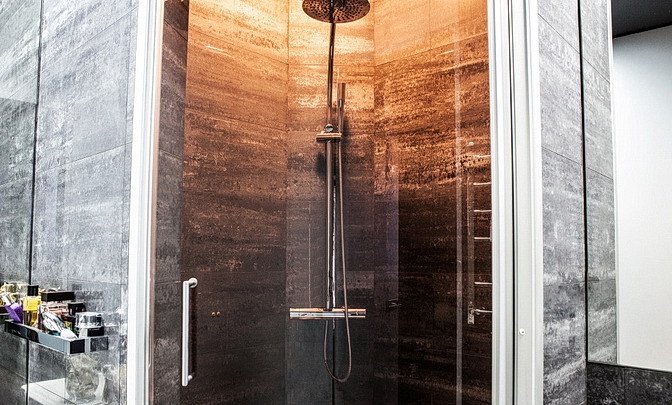 Initially it was planned to draw graffiti with night Monte Carlo, but then a corkwood was chosen as a neutral variant. 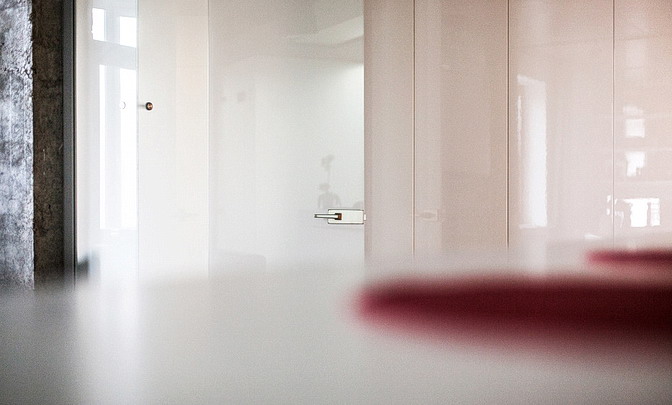 Glass partitions separating the bedroom and the toilet from the main space are Nayada. 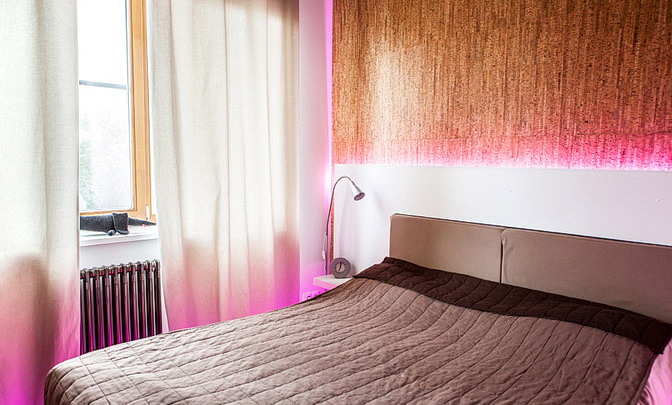 Glazed black tile and a white kitchen with turned on highlighting shine and gleam with the selected colour. Multi Color highlighting is also mounted into the bed head and into the wall. 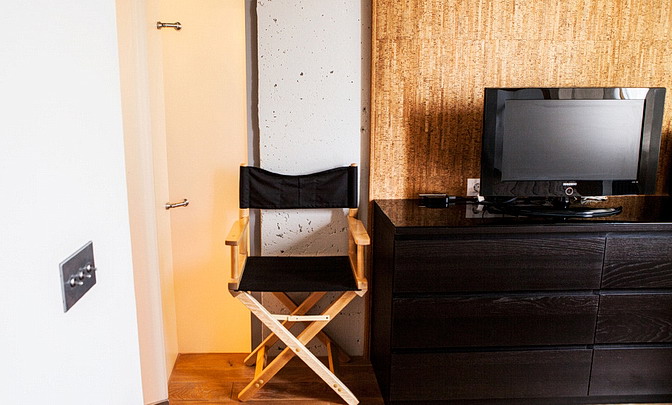 The director’s chair is Alena’s present to Vitaly.