Ekaterina and her husband sold their apartment in a residential district and bought the apartment on Frunzenskaya banking four years ago. The repair lasted for nine months, and their child was born the following day after its finishing. The dwelling turned out to be cramped for a family that’s why they decided to rent it.

For the moment of purchase there was a standard two-room apartment with a long corridor, two rooms, a small kitchen, and a split bathroom here. All walls in the apartment were broken down and Ekaterina developed a new layout project by herself.

The owners strived for universality – they made tree rooms instead of two, and the interior was made neutral at all its eclecticism. The previous tenant has moved away from the apartment recently, and now the owners are looking for new tenants. 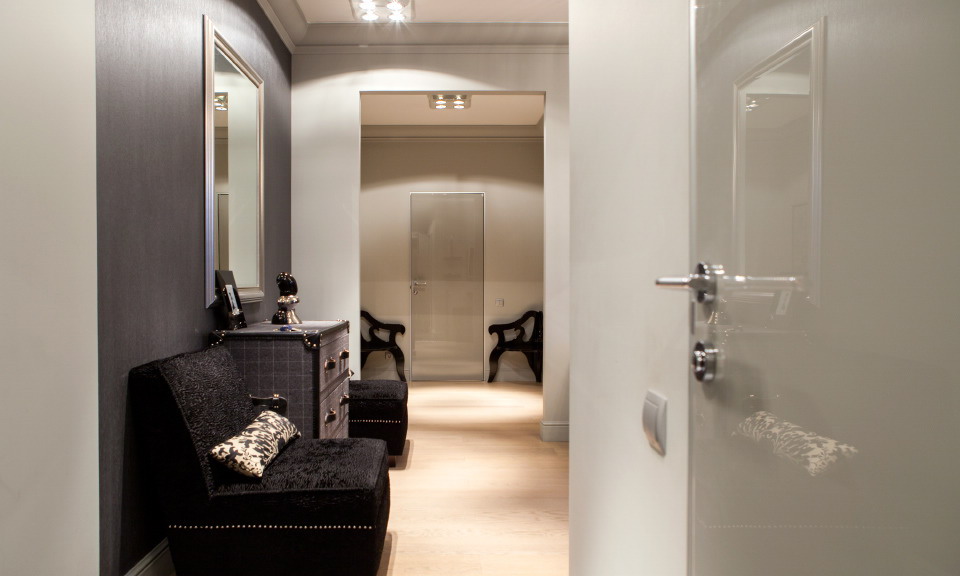 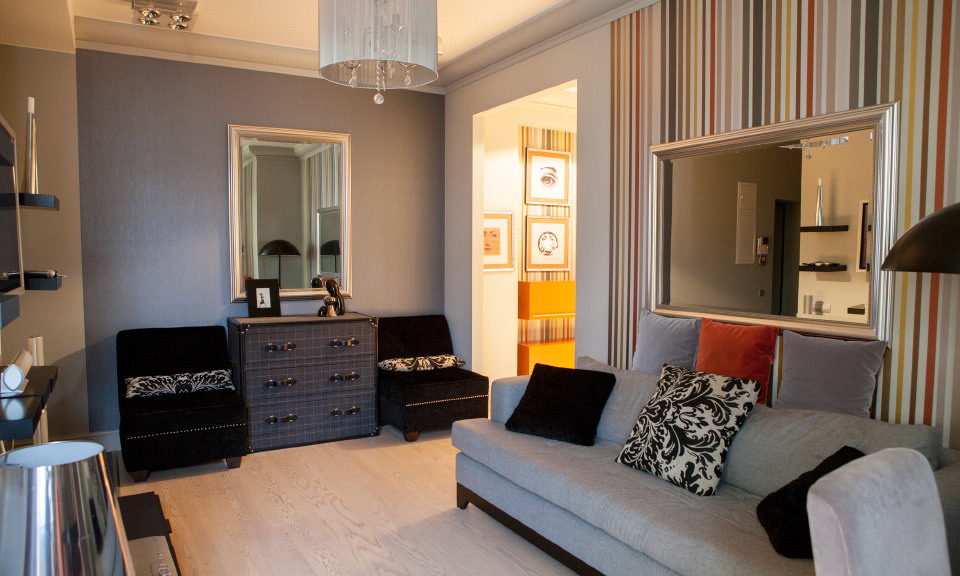 The furniture was partially moved from the owners’ previous apartment, and it became an orientation point for the interior colour scheme selection. The owners tried to combine designer furniture, items from IKEA, various low-budget elements, and finishing materials, most of which were ordered in Andrew Martin saloon. 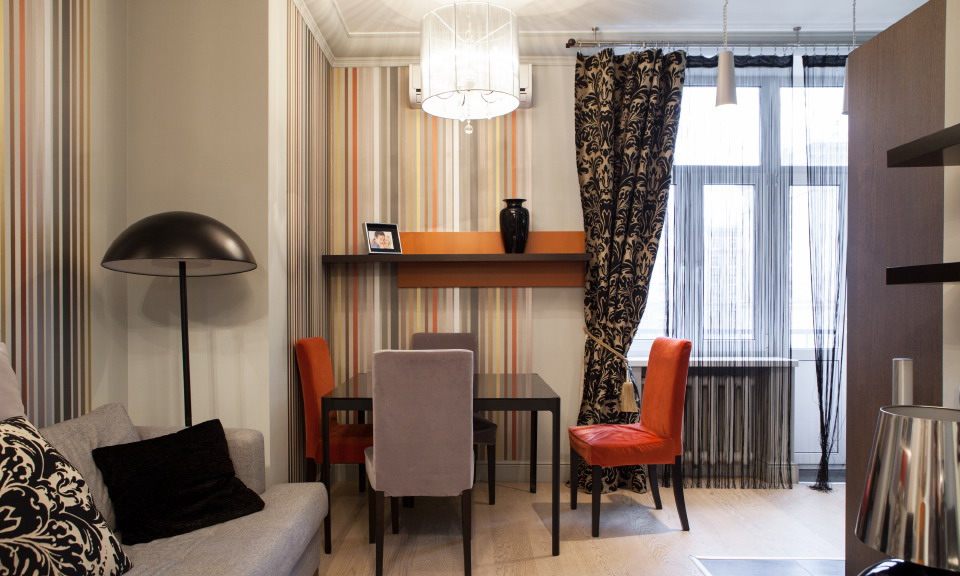 The striped wallpaper Ralph Lauren was selected taking into account an orange shelf in the living-room. A table, chairs, and a floor lamp are from IKEA, the curtains and covers for chairs and pillows were hand tailored. Lamps like in Vogue Cafe are a low-budget version from the “Lamps” shop in a basement on Dmitrovskoye highway. 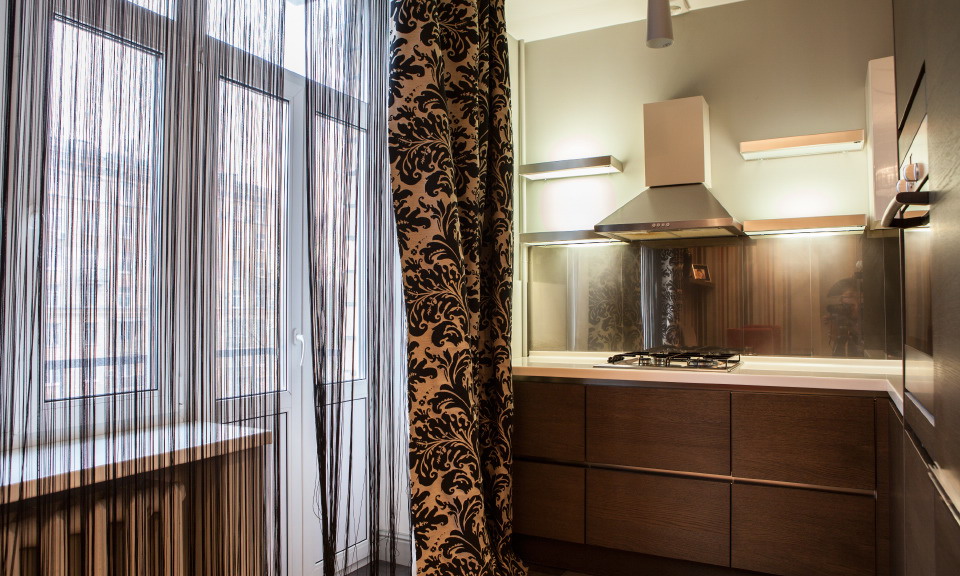 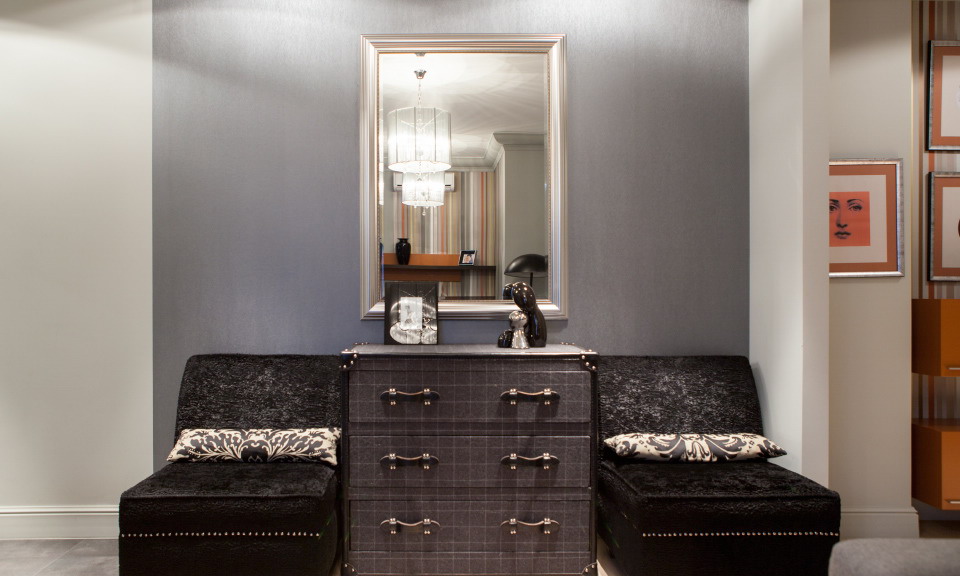 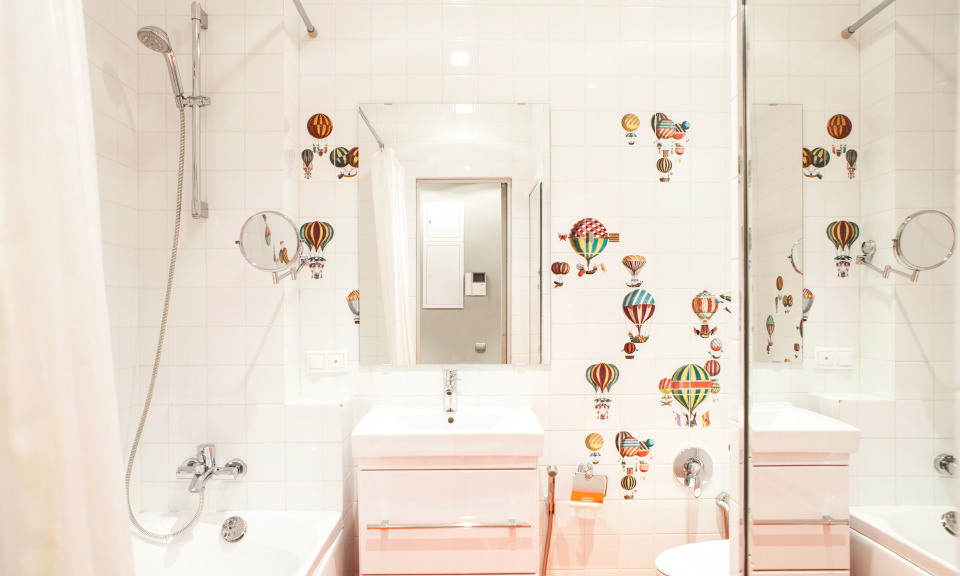 The splash back of German manufacture was covered with floor tile bought in Rim saloon. The tile works well with chrome.  There is a bathroom opposite the entrance door. The tile is Fornasetti. 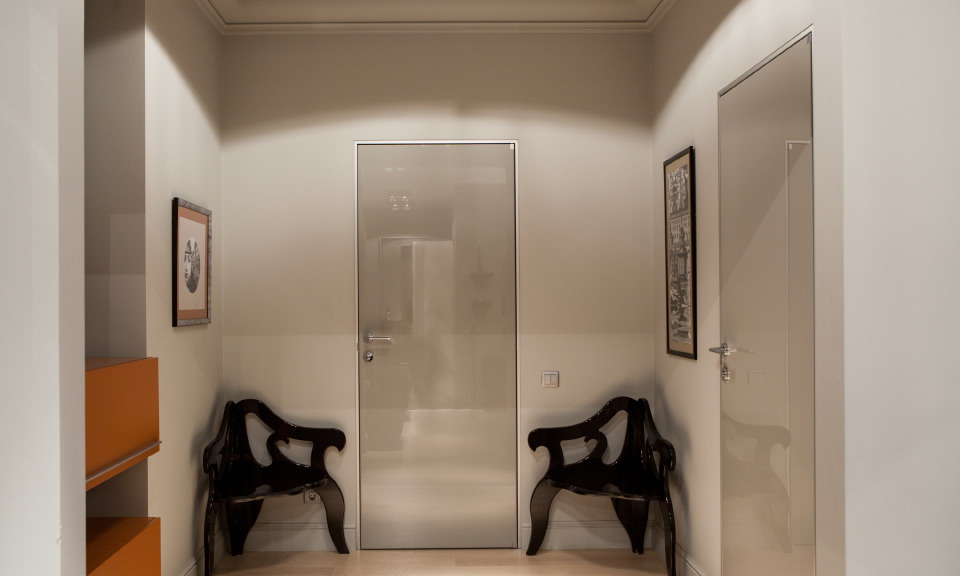 Chairs are of domestic manufacture, they were found in “Fabric Center” on Entuziastov highway. The owners and the decorator made the doors double-faced. The Union Company was not engaged in such orders at the time, that’s why they had quite a job with it. The company in its turn took note of this know-how and included it into their assortment. 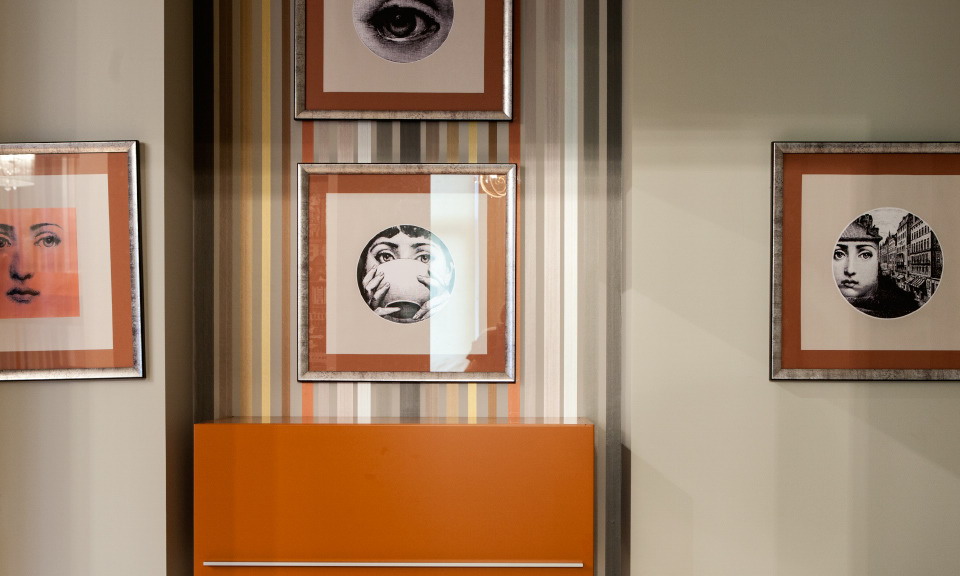 Orange boxes in the niche were also moved from the previous apartment. A decorator Galina Shashkova printed out posters coinciding with the boxes and the tile in the bathroom and laid them into hand-made mounts. 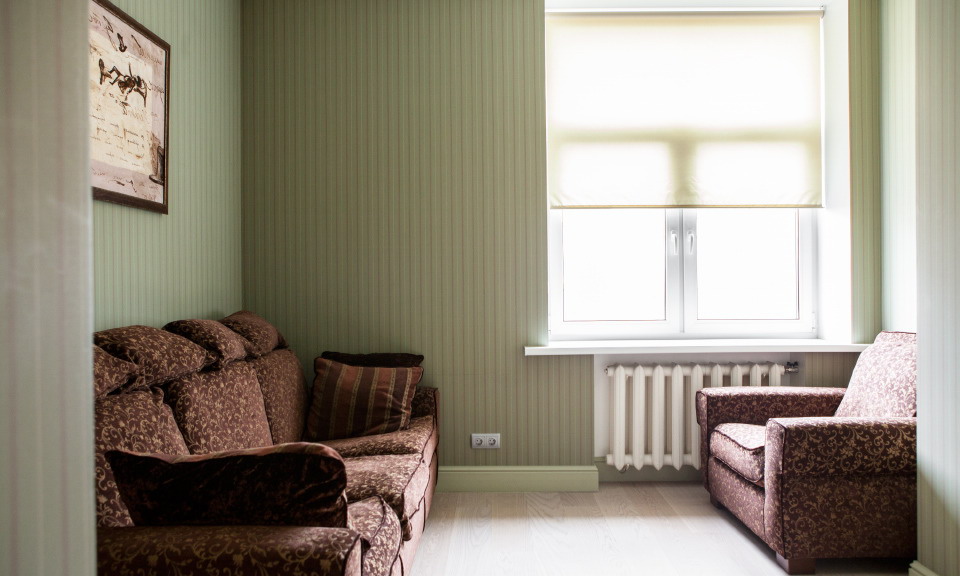 A sofa, a chest of drawers, and arm-chairs are Andrew Martin. Mirrors are from IKEA. An arm-chair and a sofa are Provasi. 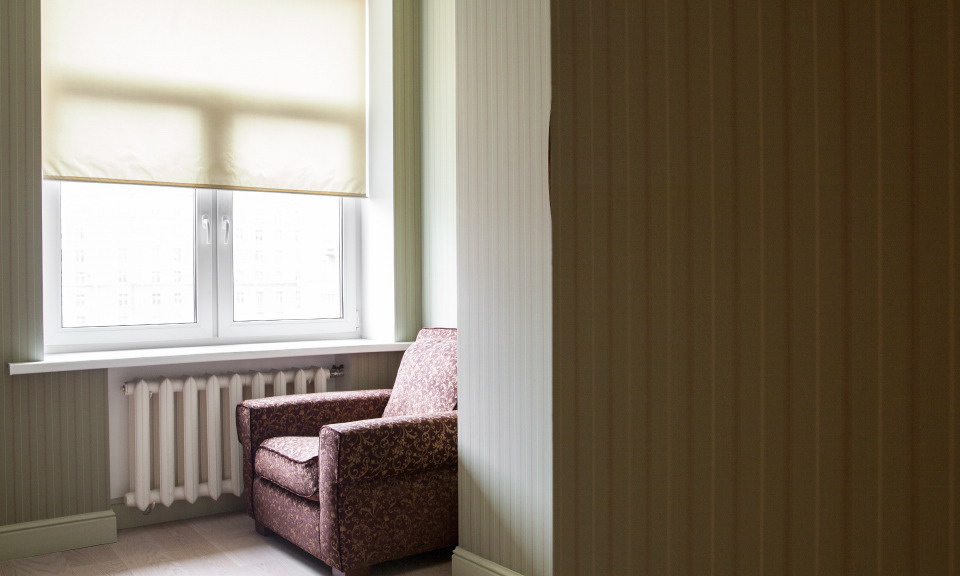 Pea-green wallpaper in the cabinet is Ralph Lauren. 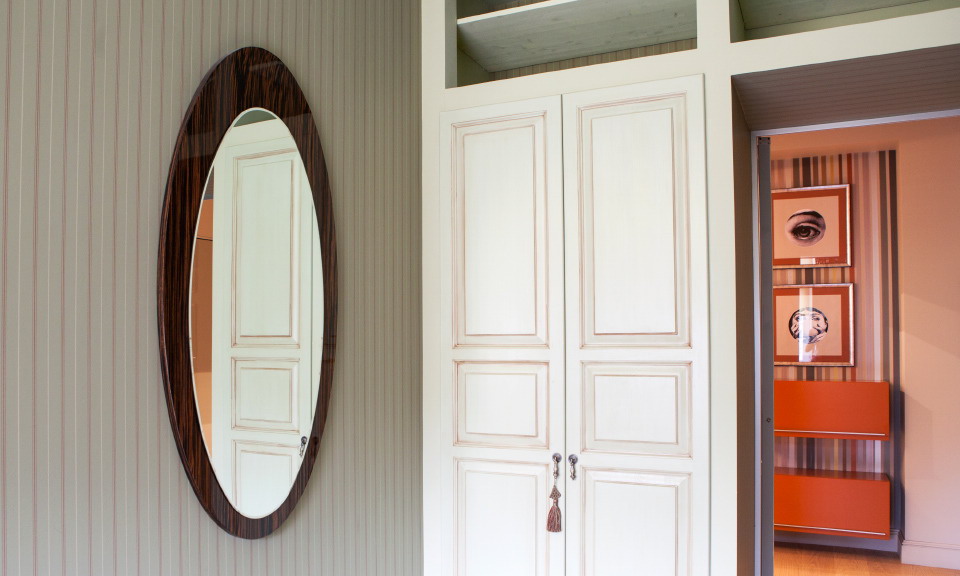 Wardrobes are author’s solution of the decorator. 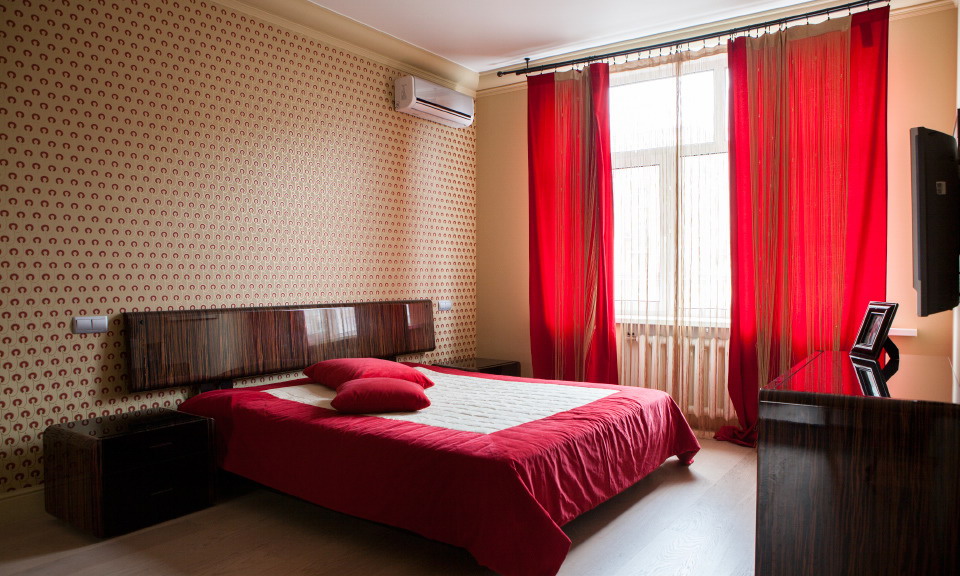 A bed and furniture of zebrano colouring were also moved from the previous apartment. 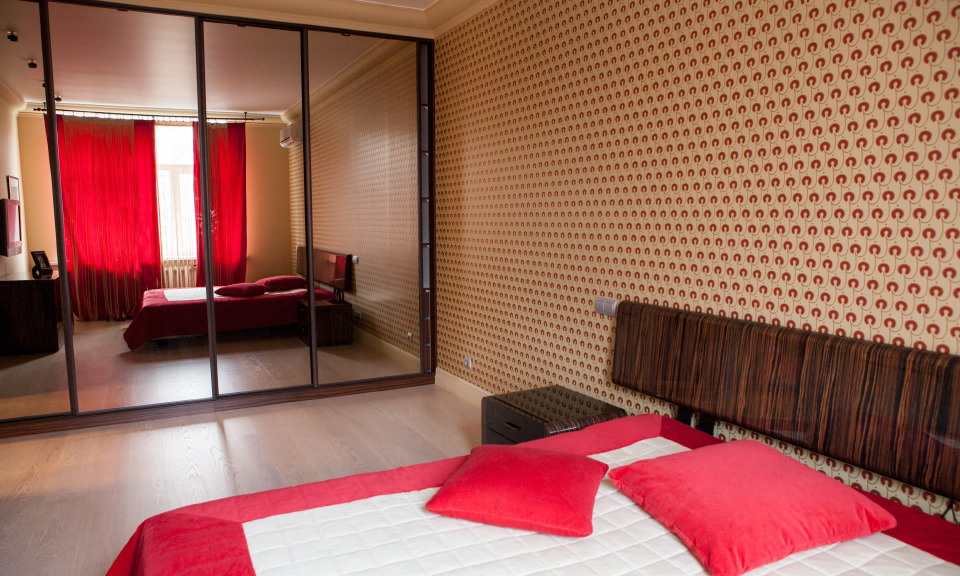 The wardrobe was ordered in Mr. Doors.  Reproductions of photos by Helmut Newton hang on the walls. 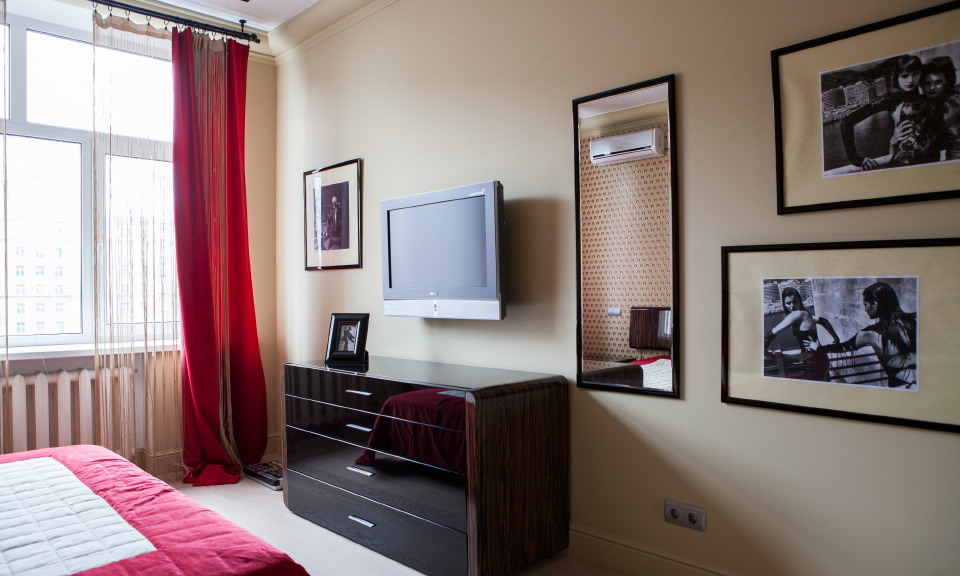 The curtains are from IKEA, the decorator thought up to sew a bed cover from this fabric.