A four-level apartment in the south-west of Moscow upon Petr Kostelov’s project with author’s furniture and corkwood finishing.

At the very height of crisis of 2008 – not a simple time for architects – Petr Kostelov unexpectedly received a letter with two orders which were a dream. One object was a small apartment at Kitay-gorod, the other was a two-level apartment with the metric area of 250 square meters. The owners sold the former apartment after a partial repair – the new owner walled up carefully restored brickwork with artificial one with plastic, and installed а shower cabin with hydromassage instead of sanitaryware Duravit of “1930” series.

The architect’s disappointment was compensated completely with the work at the second project. The space surprised: 250 meters on two levels with nine-meter ceilings in some parts of the premise gave a full swing in realization of Kostelov’s favourite mezzanines. On top of it all the customers – a family with two children – gave a full swing in the matter, insisting only on using of warm colour scheme.
The repair lasted for almost two years, during which the context changed a little: two more children appeared in the owners’ family, and initial architectural and functional designs were changed a little as a result.

The object was unique by many parameters, and that enabled to make a house in a house from the apartment. Three levels were made instead of two due to high ceilings, significantly increasing the living area (by 80 square meters). 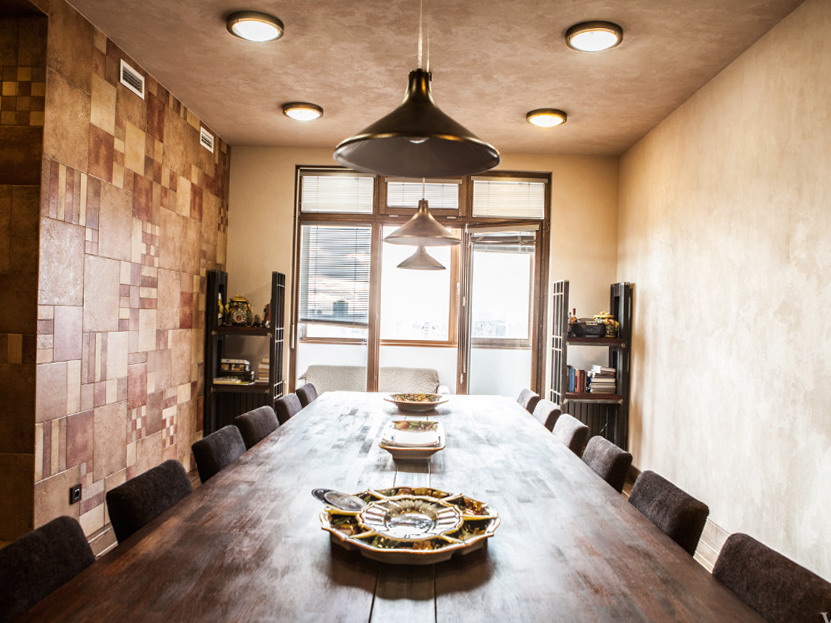 Ceiling and hanging lamps are Traddel. 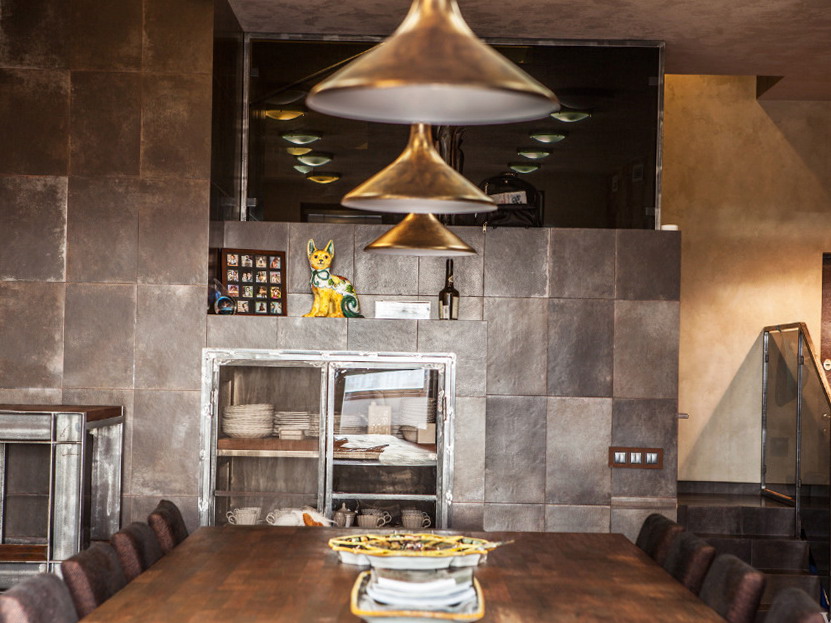 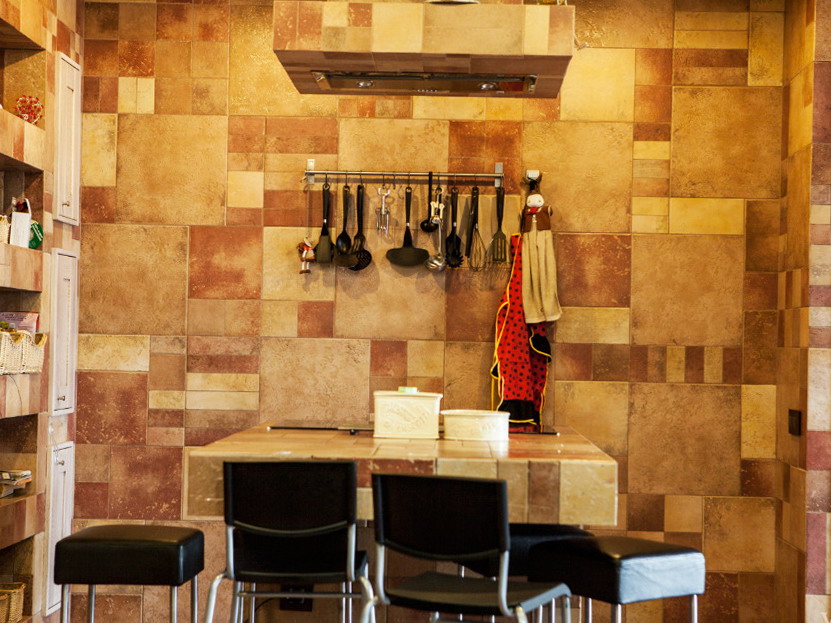 METRIC AREA 68.26 sq.m
A kitchen, a dining room, two wardrobe rooms, and a toilet room are located on the first level. Almost all furniture in the apartment (except for sofas and beds) was made from the architect’s scratches 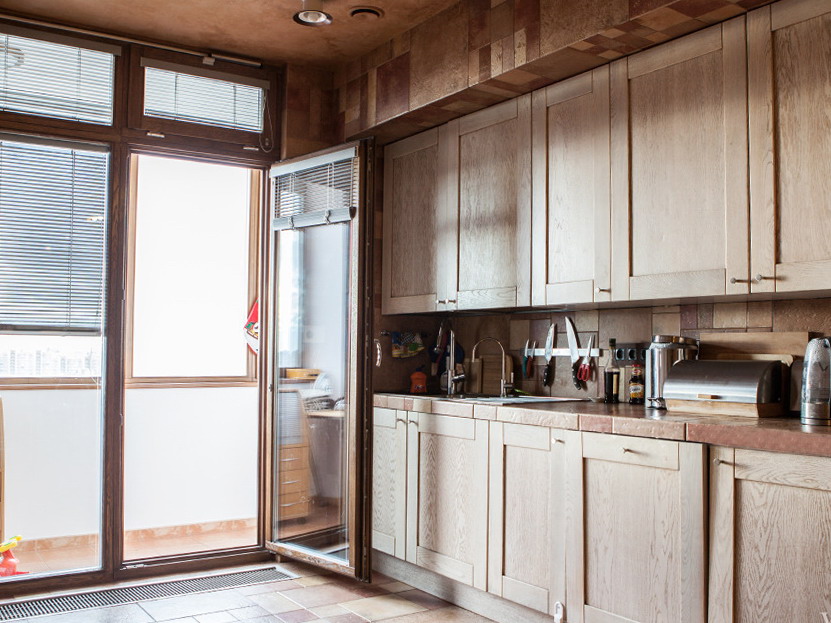 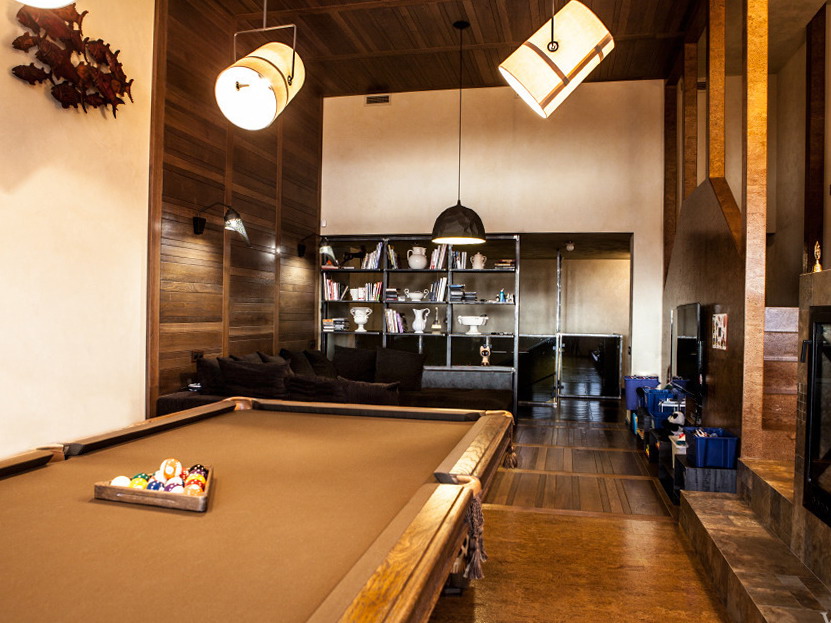 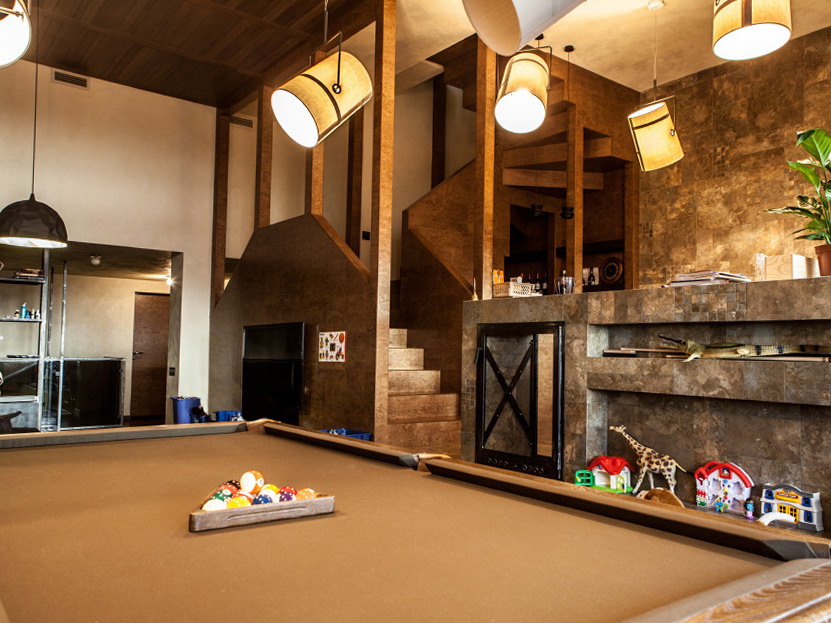 The second level represented a space with a 60 sq.m area with very high ceilings initially. It was divided into two parts vertically. The living-room with a billiard-table, a bar, and a fireplace is located below. 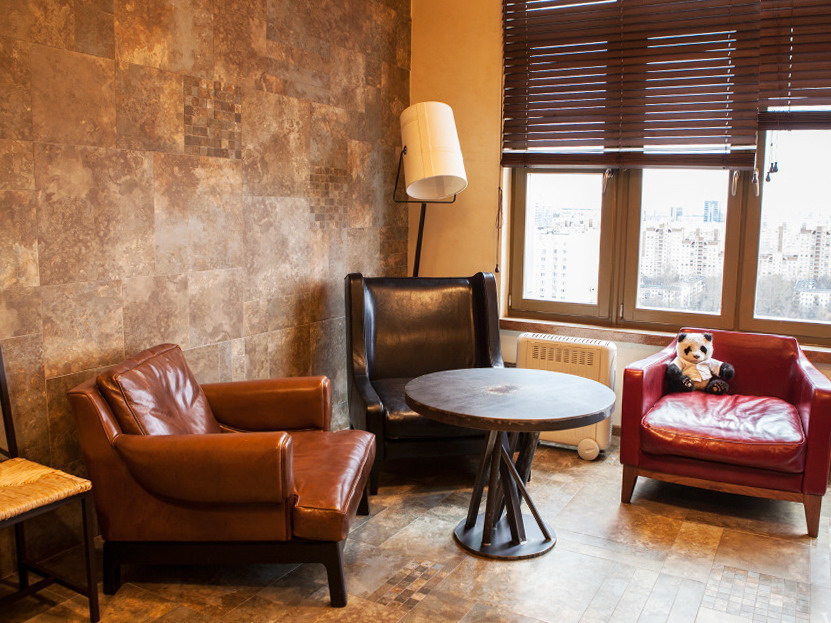 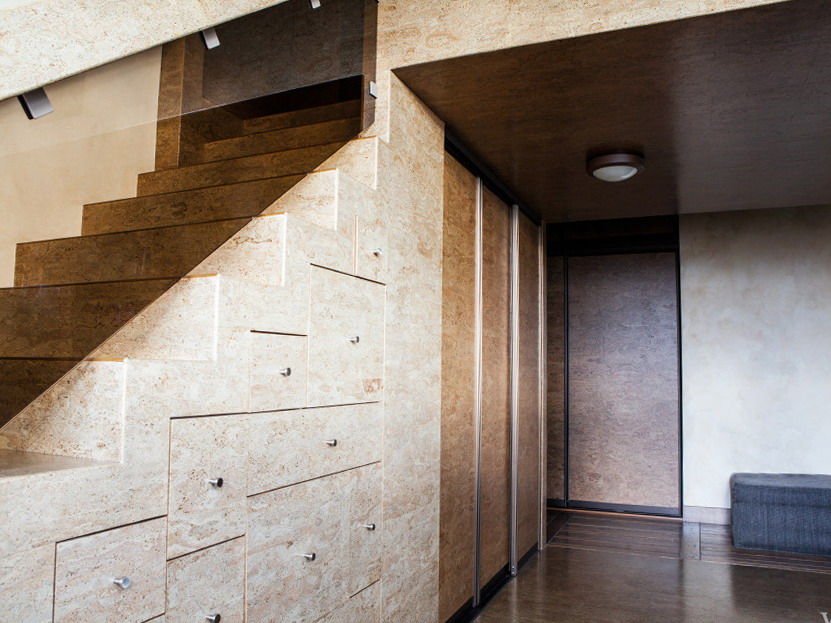 The ceiling height in a unit consisting of three children’s rooms enabled to make two levels and to increase the area of each space by 30 square meters. 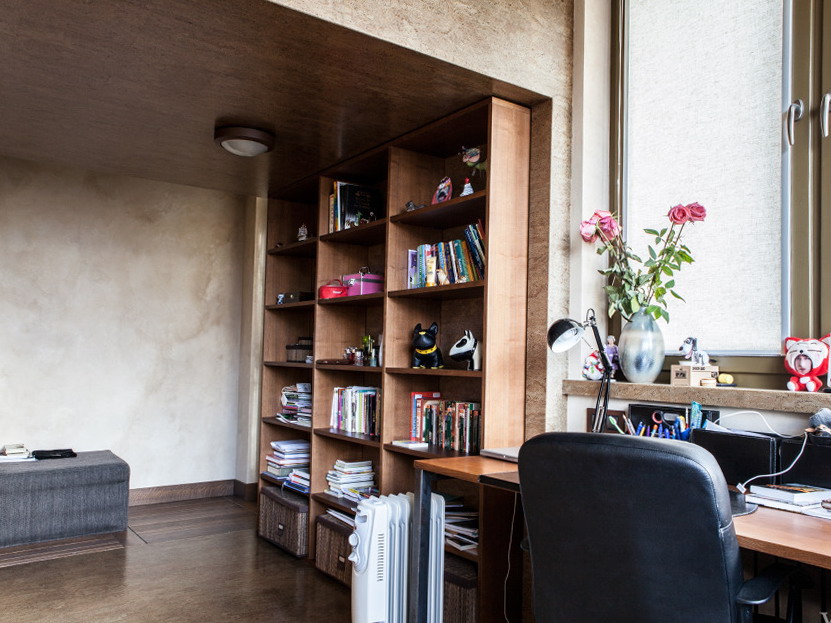 There is a library in the right part of the apartment, where the second level was overbuilt like in children’s rooms. 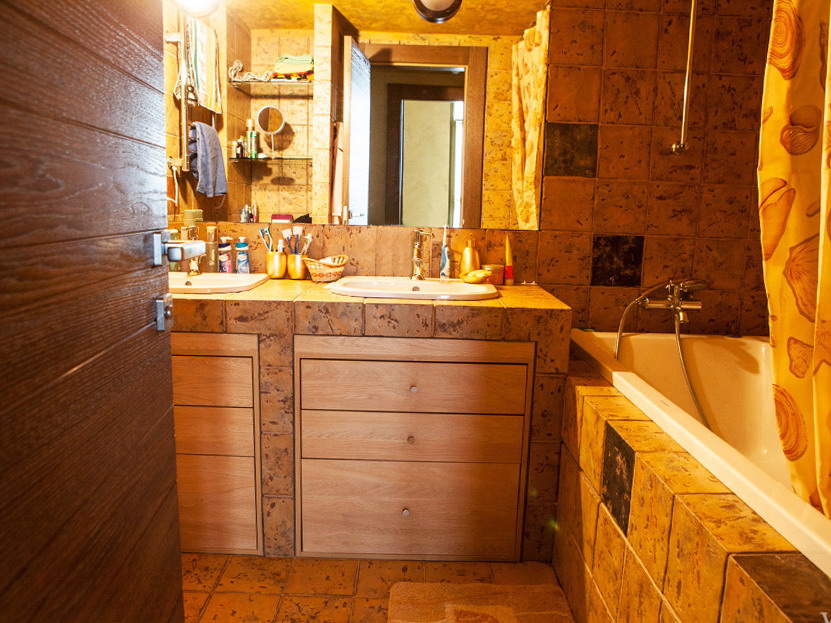 The main finishing material in the apartment is corkwood. 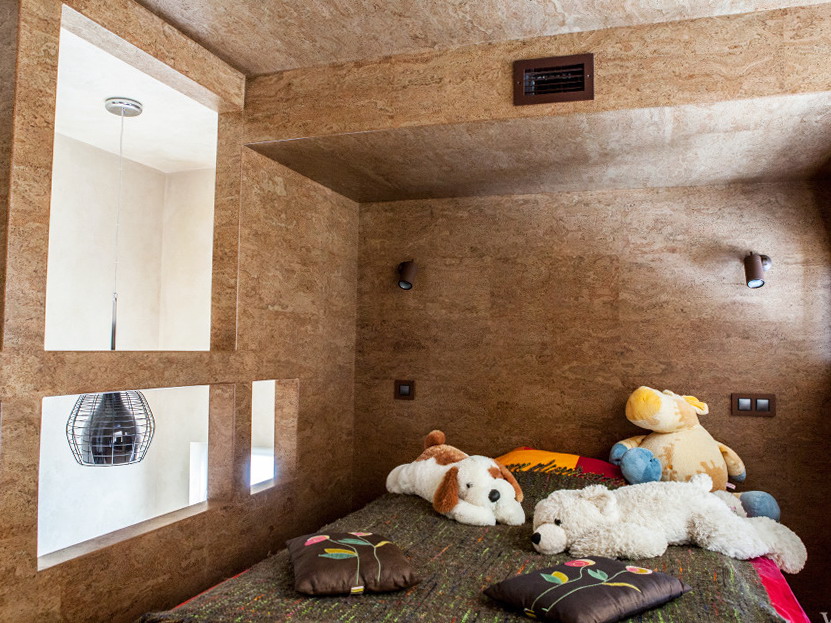 The hanging lamp is Diesel with Foscarini. 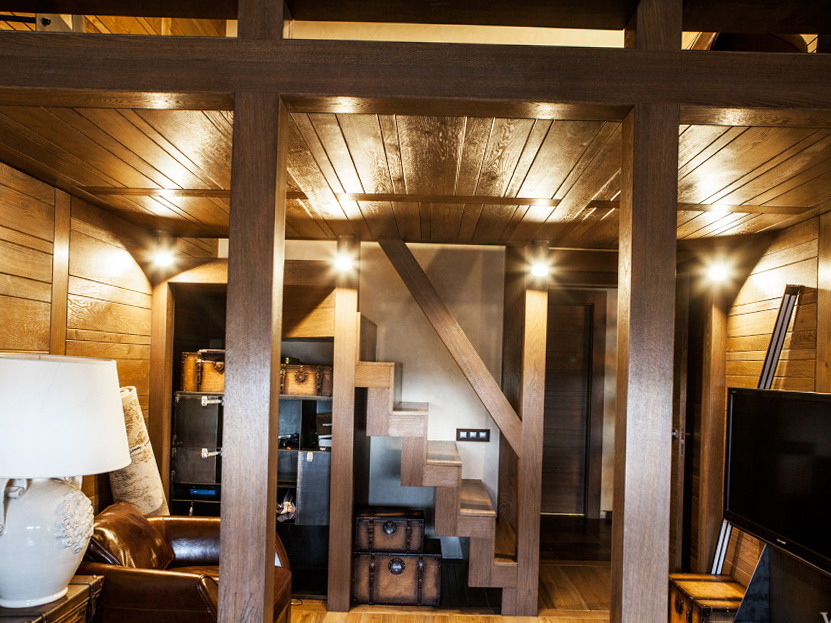 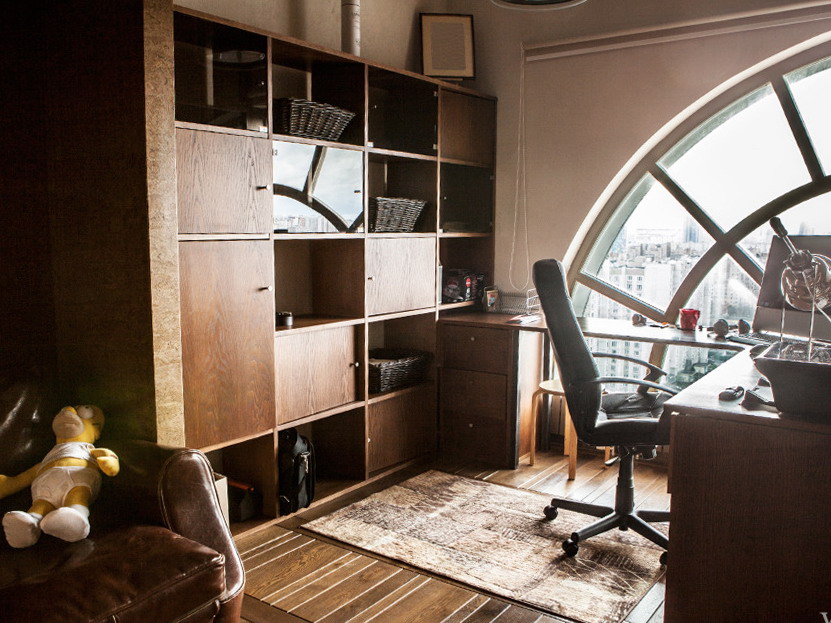 There is a bedroom and a cabinet on the overbuilt third level. 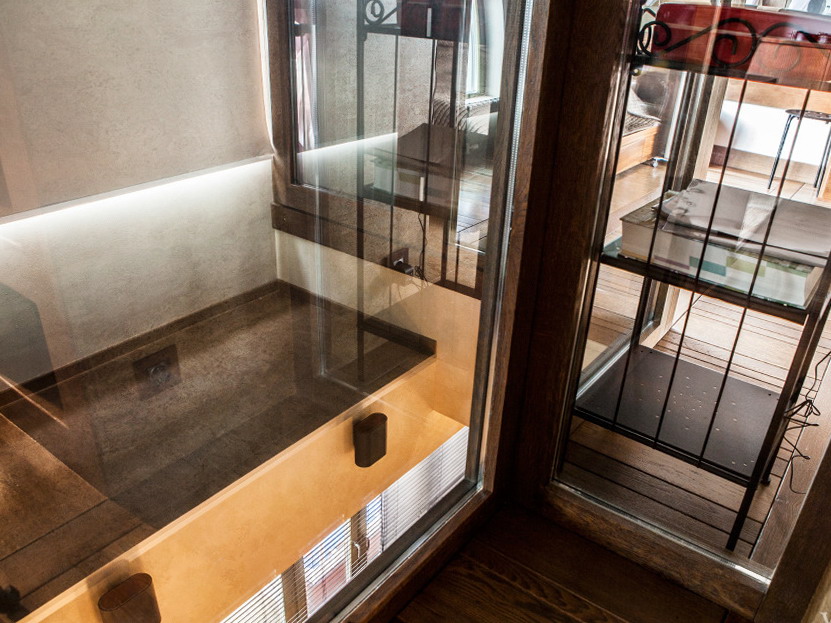 The architect provided for two openings in a flooring between the second and the third floor. One was left for the staircase, and the other forms an original well. Thus, two levels were connected, light was distributed uniformly, and cabinet and bedroom zones were separated by glass partitions. 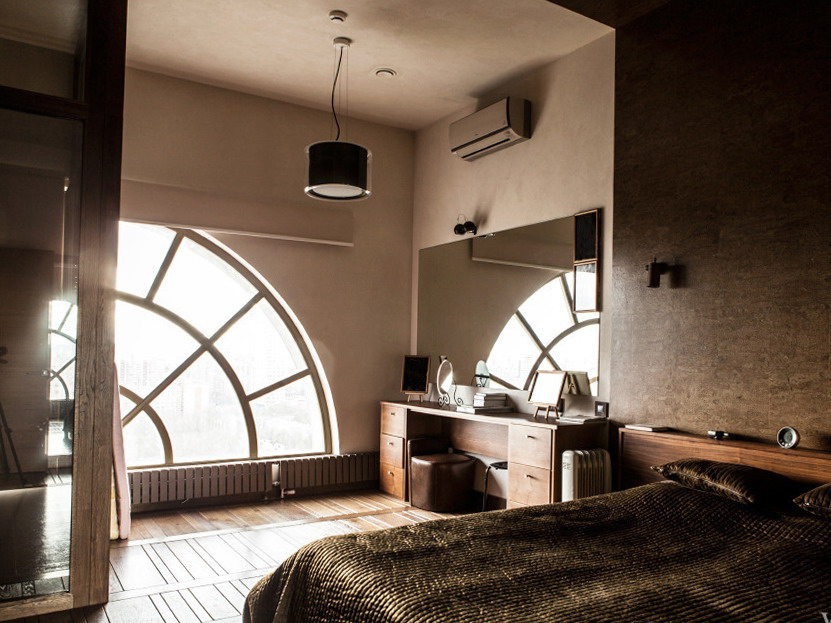 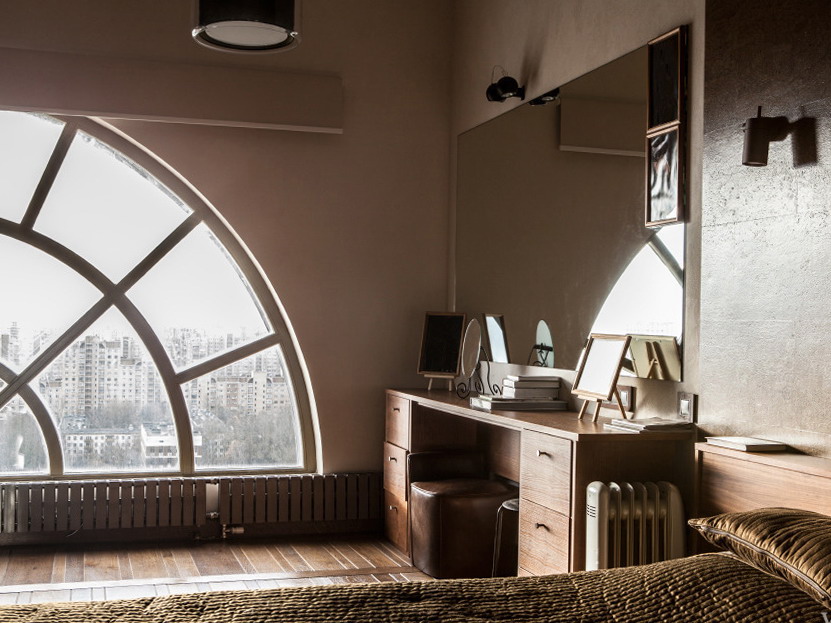