A single-room apartment of architects with a low-budget repair and original interior objects.

Sergey and Nastya are architects. The apartment in the north of Moscow belongs to their customer who suggested them to set it right and live there until she puts it up for sale.

The task that faced the architects was to create a harmonic interior with a low budget and quite tight schedule. But everything shaped well: temporary owners spent little money, made the repair, and have been living here from the last December.

During the repair they had the opportunity not only to experiment, but also to get experience of repair works invaluable for the architect. They made practically everything by themselves: glazed and painted the walls, made the furniture and interior objects partially, the workers only tiled the floor and walls in the bathroom.

The owners became familiar with all “Lerua Merlen” low-budget line and found out to their amazement that quite worthy objects can be found in this segment. For instance, laminate imitating oak, the most wearproof from suggested, looks quite worthy in combination with a successfully chosen colour of the walls and interior objects. The wardrobe room is behind the curtain. 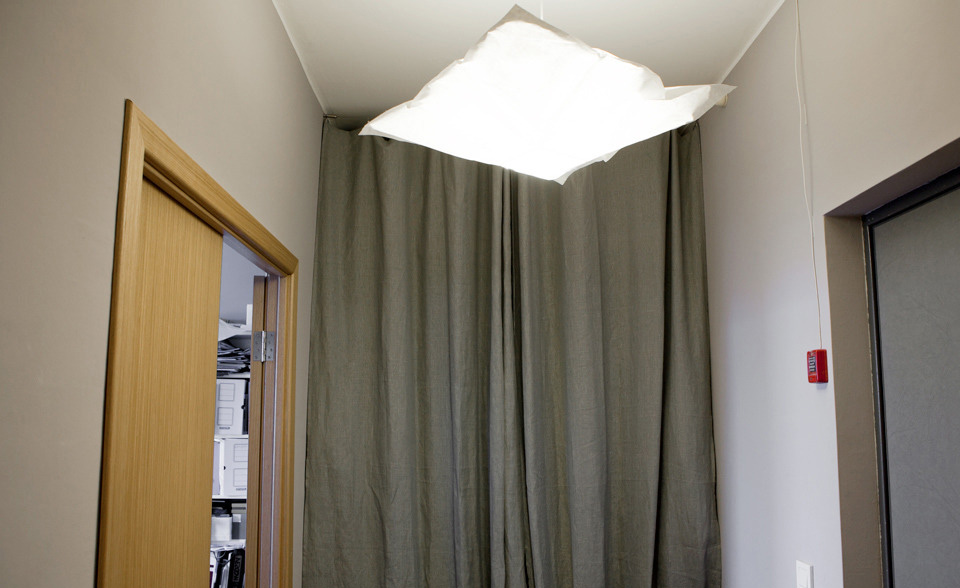 The layout was remained unchanged, they only removed the wall with the door leading to the kitchen, leaving a free opening in the corridor. 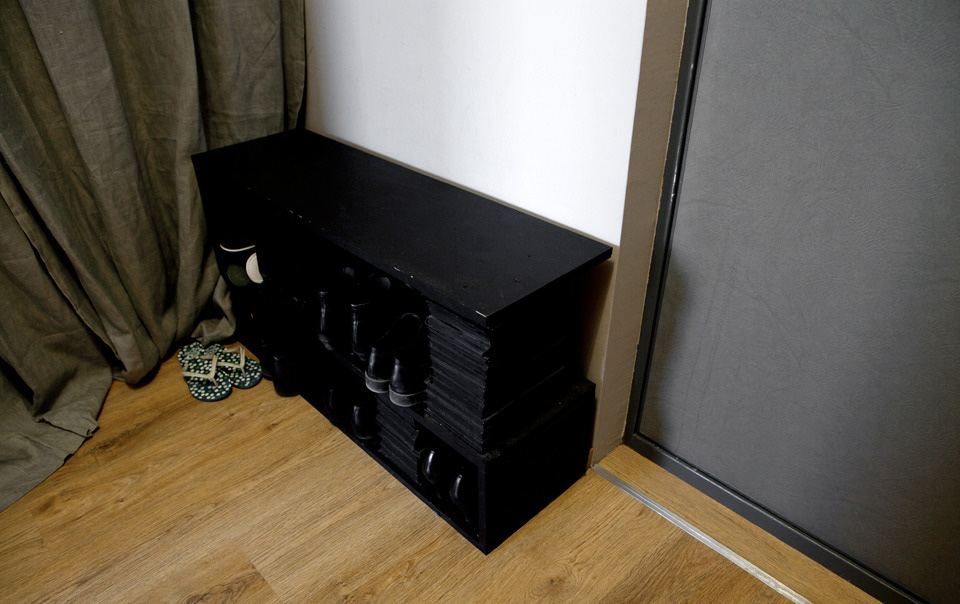 The footwear stand was painted by two nephews of Sergey. 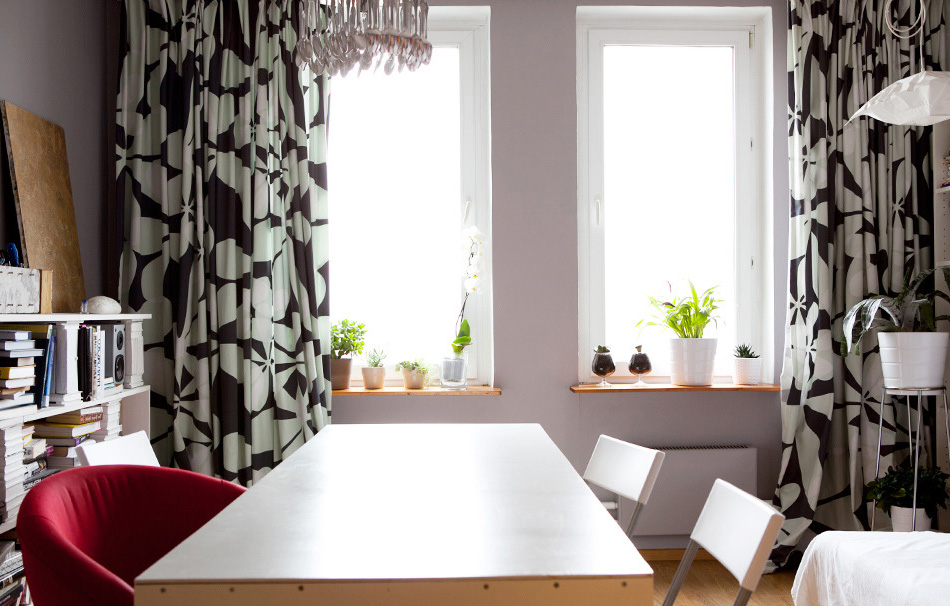 The owners work at home much. The central element in the room is a working table, a product of one more structural testing. The structure from 9 mm thick veneer sheets occurred reliable and light due to the additional geometrical support. 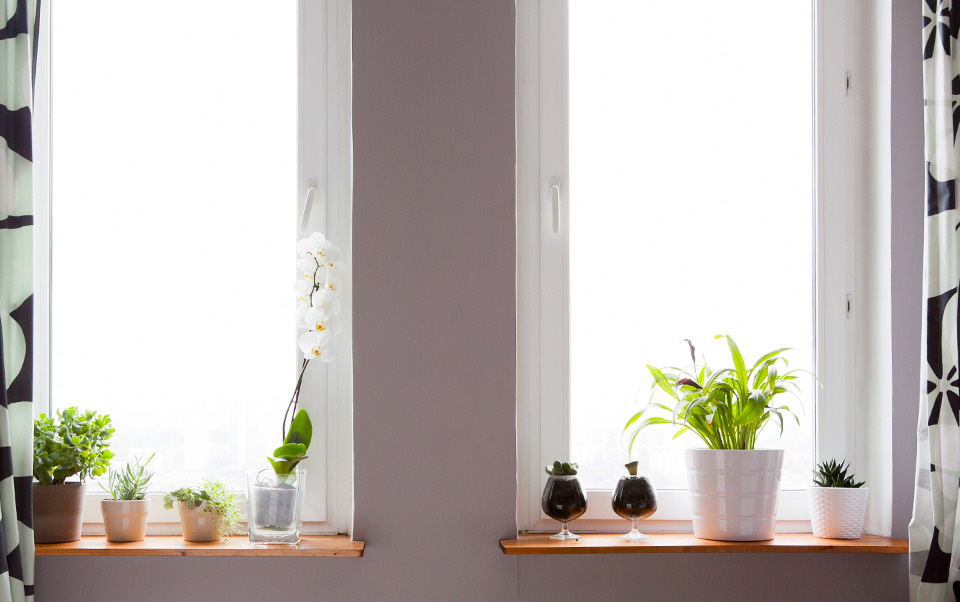 The walls are painted in different colour shades but the tone is leveled due to the daylight. 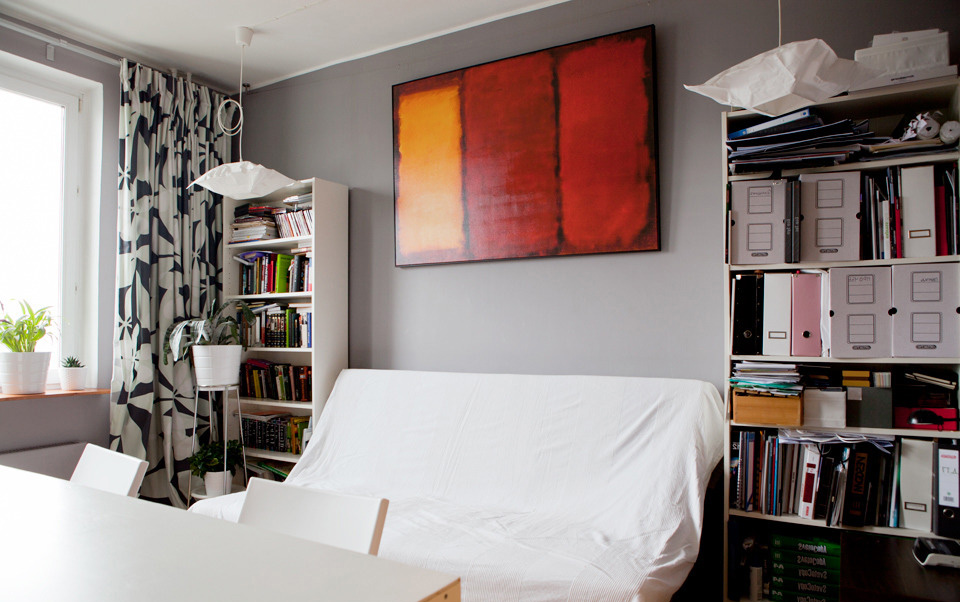 One of colour compositions Rotko was printed on a canvas, its warm tones match the walls well. 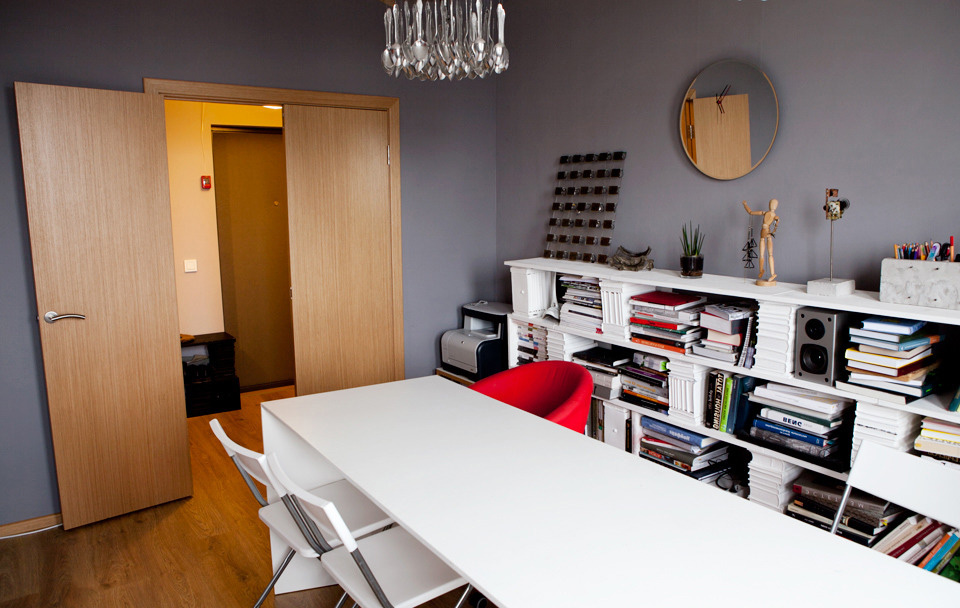 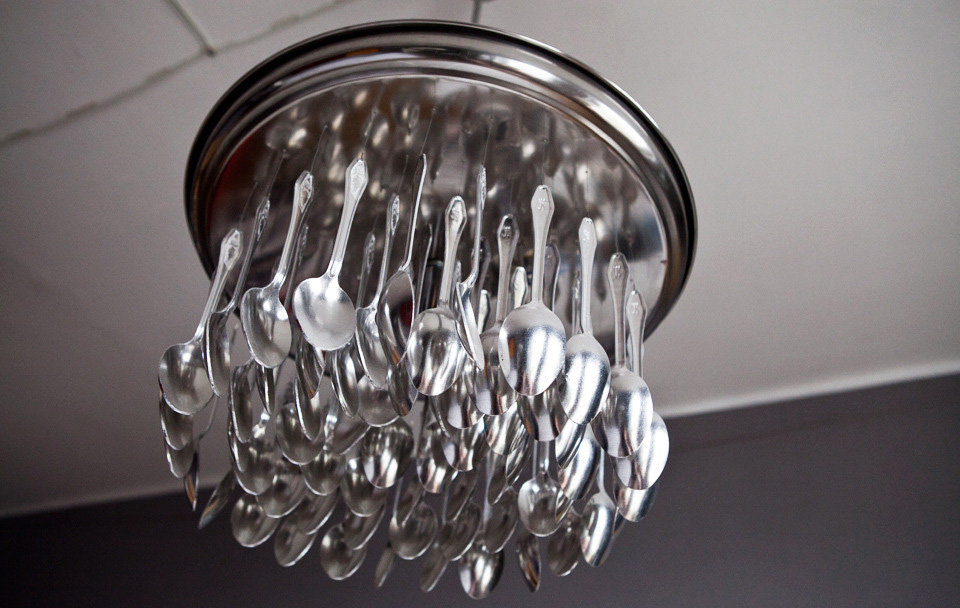 The owners tested the lighting principle in the room, where the light source is some ceiling lamps in different corners of the room. The experiment proved its value: one can switch on only several lamps or all at once – in this case even illumination creates relaxing atmosphere. Lamps from aluminum tray and spoons are one more invention of Sergey. According to author’s words this is a prison replicate to a famous ceiling lamp by Verner Panton. 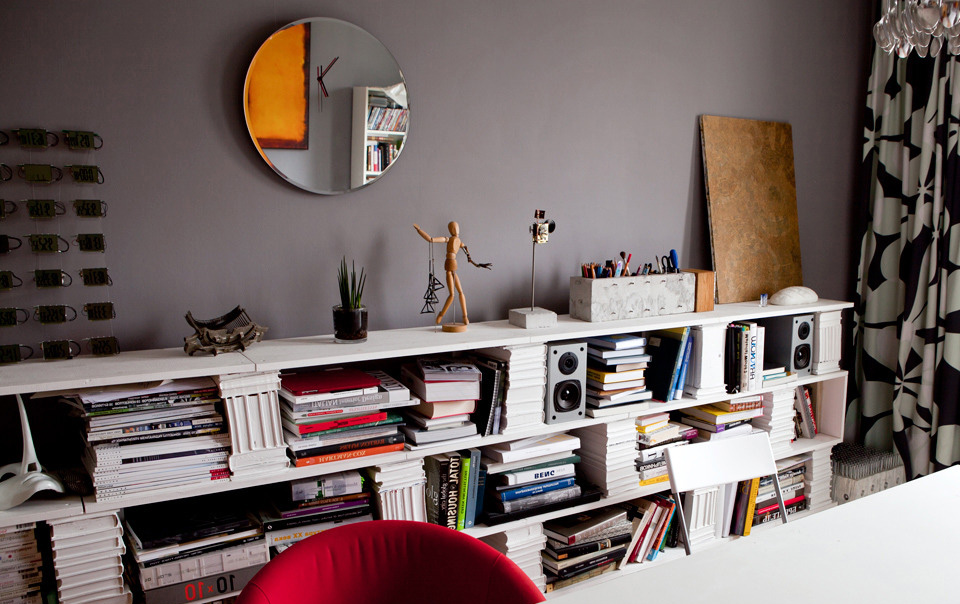 Books are common passion of Nastya and Sergey. Fusion of their libraries marked a new stage in their relations in due time. Books were distributed in two stands: a smaller one is for fiction, and a large one (at full length of the wall, own-produced) is for professional literature. The stand from books screwed together is one more invention of Sergey. He collected in libraries about three hundred volumes which were not included into stocks and became abandoned due to bureaucratic acrimony. He assures that there is no sacrilege in relation to books: he used only those books for which such destiny is the best that could ever happen to them. The structure with books about one and a half ton weight reels a little, but being conscious of its indestructibility Sergey regards it as manifestation of vitality. 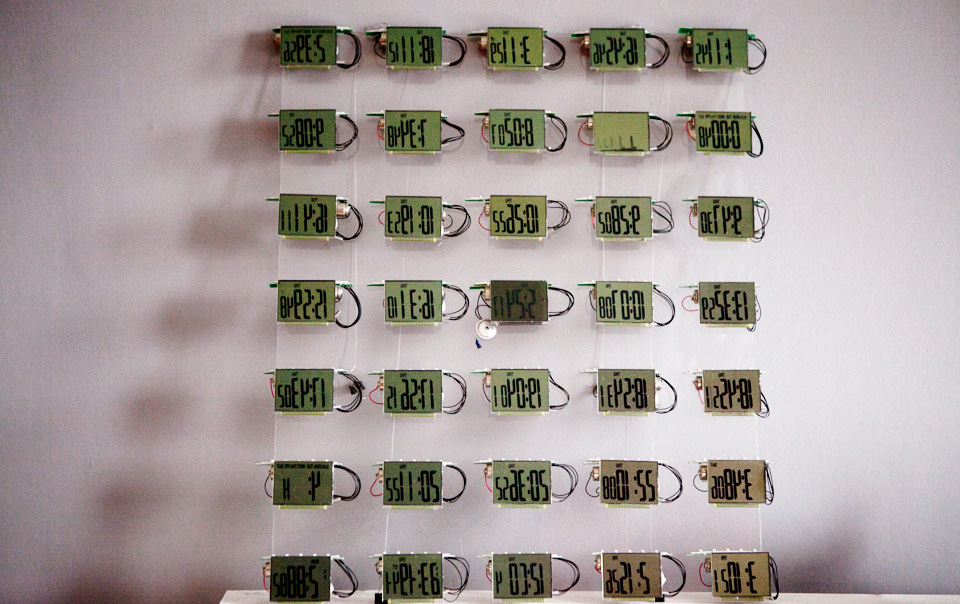 The clock creating a suprematic composition, a comfortable stool with the seat from pins, as well as a concrete pencil cup, a clockwork sculpture, and IKEA-man with an artificial arm are fruits of Sergey’s procrastinations in different periods. The owners like modern art very much. Sergey even entered the Modern Art Problems Institute after he had attended a course of lectures in the Central House of Artists and the National Centre for Contemporary Arts. He studied for a year and understood that architecture attracted him much more than modern art. Nevertheless he presented his work at the exhibition “Cartography of the Possible”. An alarm was set on every clock before, and the composition rang every 13 minutes. Now the clock has got out of time. 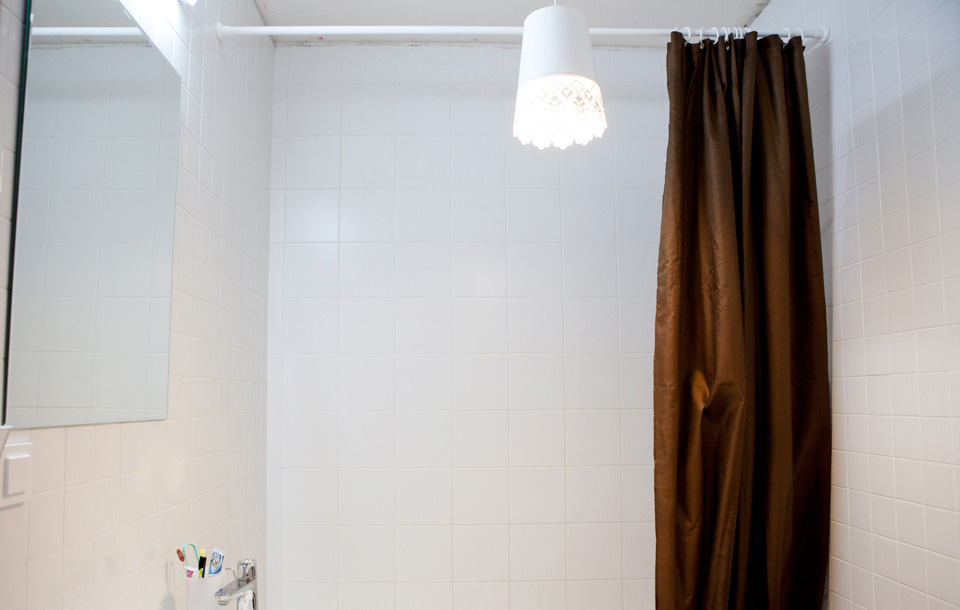 Two types of lighting are installed in the bathroom: cold for a bracing morning shower, warm for an evening bath. The suspended lamp is made from IKEA cache-pot by Sergey. 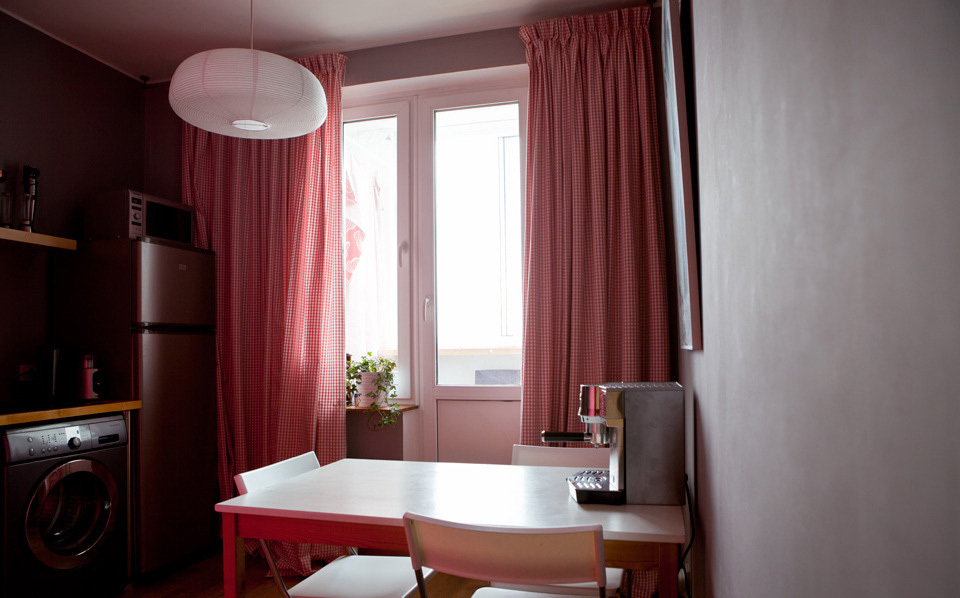 The owners devote much time to colouristics and combination of textures, and they got tired of a variety of colour shades – the choice of wall colour is conditioned by this. Nastya and Sergey decided to refuse standard scheme – the floor and doors are darker than the walls. In this case oak was chosen for the floor and it matches grey very well. 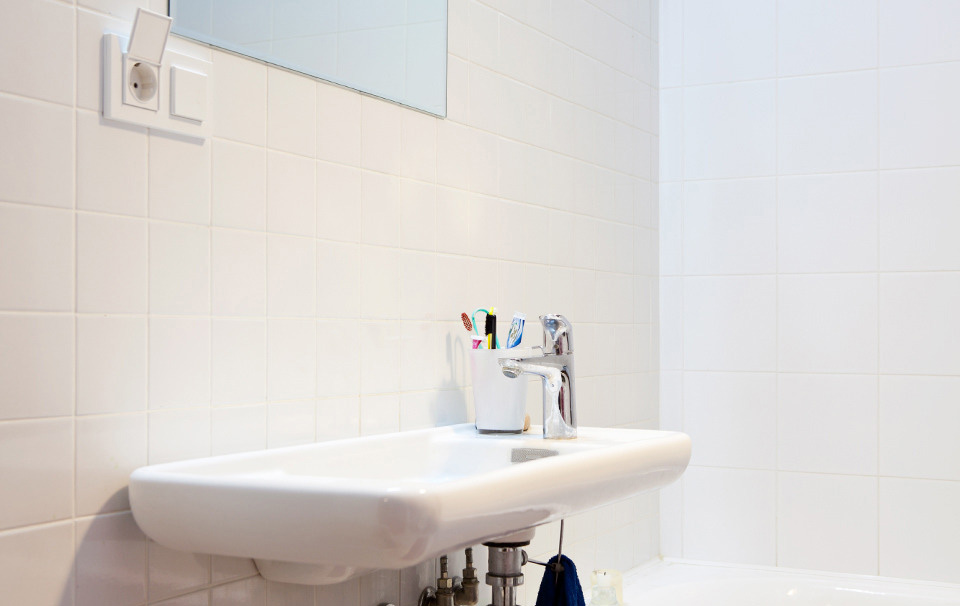 A rectangular sink, which occurred quite functional was transferred and a space for washing machine was left for future dwellers at its place. 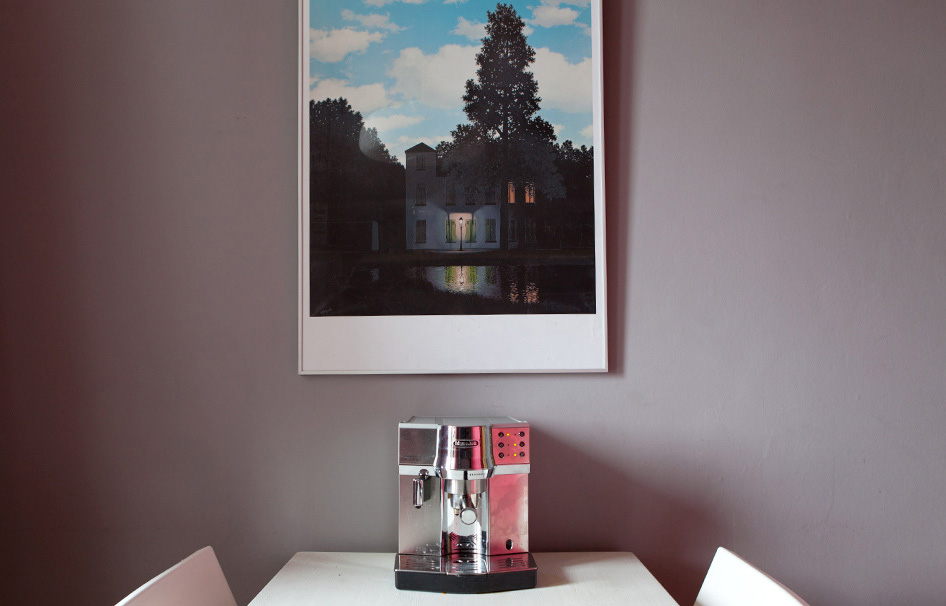 At the same time they wanted experiments. All walls are painted in one colour of different shades. A pink wall is an exception.  A poster with the picture by Magritt was bought in the museum in Brussels. It is exceptionally interesting to watch the reaction of guests far from the art according to owners’ words: they do not understand what is wrong with this picture at once. A low-cost solution was developed for the kitchen as well. But they had to withdraw the oven in favour of the washing machine. Nastya sewed curtains from IKEA fabric by herself. An ordinary IKEA table looks much more cheery with a tabletop painted white.