Peter and Nastya bought the apartment on the 24th floor of a new Residential Complex “Dubrovskaya Sloboda” in the south-east of Moscow right after a new building commissioning. The couple lived in this district before but they decided to move to a more spacious apartment. Furthermore the architect’s office Za Bor, where Peter works, is located within 8 minutes of walking distance.

There were panoramic windows and a free layout in a new apartment. Excessive walls did not interfere with the architect’s imagination. The owners were suggested an apartment with a view to the center, but the couple preferred an industrial landscape and intensive traffic of the Third Ring. The repair lasted for about five months and was finished a month ago.

Peter as an architect is laconic and prefers a play with forms to a superfluous decor. Neutral white was chosen as the main colour. Oak parquet (not only on the floor, but partially on walls as well) was chosen for the finishing. Non-aesthetic details like air conditioner were hidden under the wood. 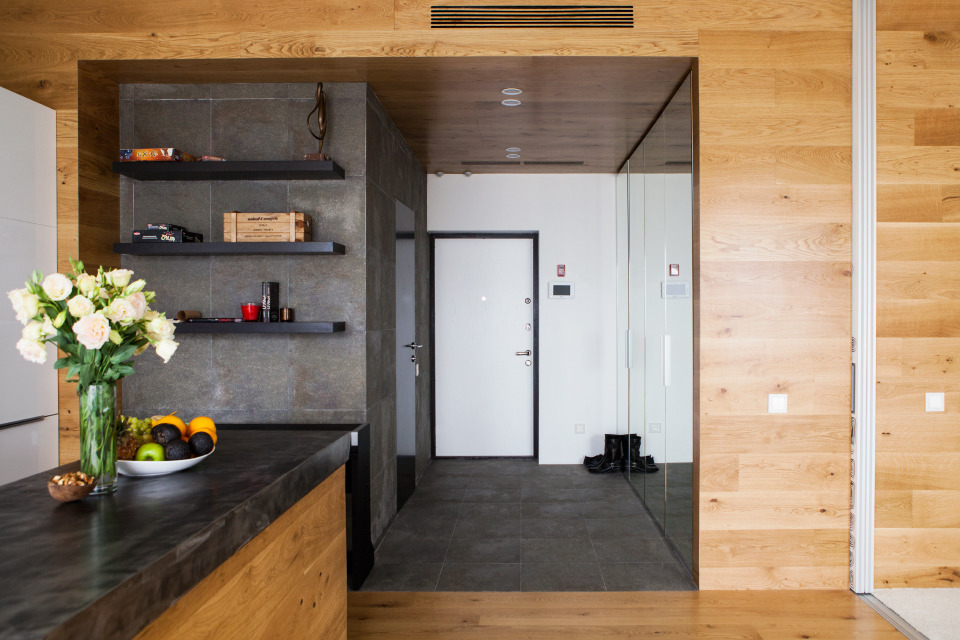 Initially a contrast black bar counter was planned to be installed as a kitchen island. The owners didn’t manage to find anything adequate in saloons, that’s why a geometric structure from metal sheets in the spirit of Za Bor bureau was made to order. 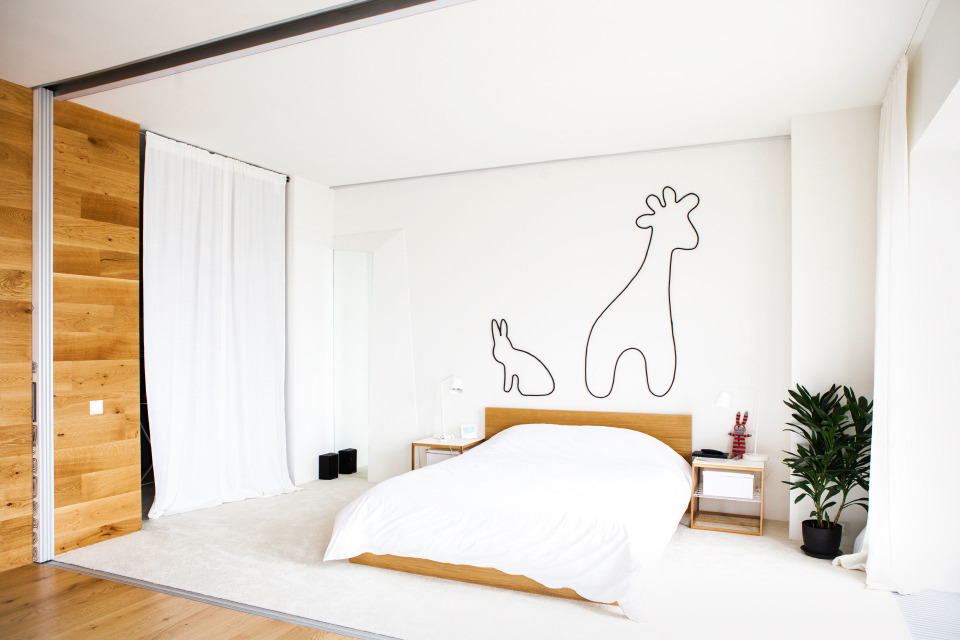 The apartment is registered as two-room, but in fact it is a mobile studio. Italian extendible panels Movi turned out to be too large and they had to be divided into four parts. They were pasted with a special film, transforming it into a marker board for writing and pictures. In an opened position the panels are invisible: they hide into a wooden wall. 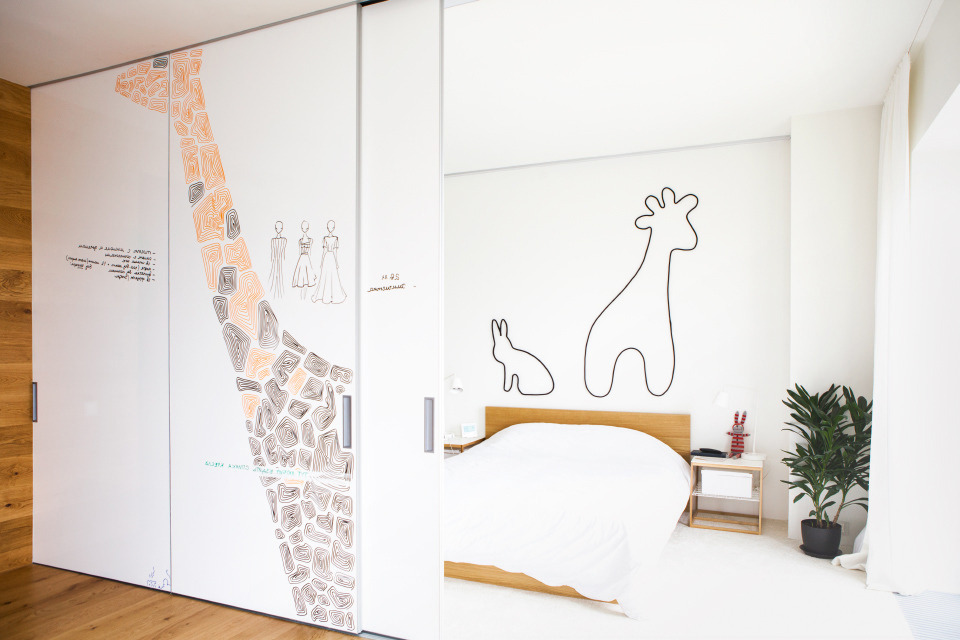 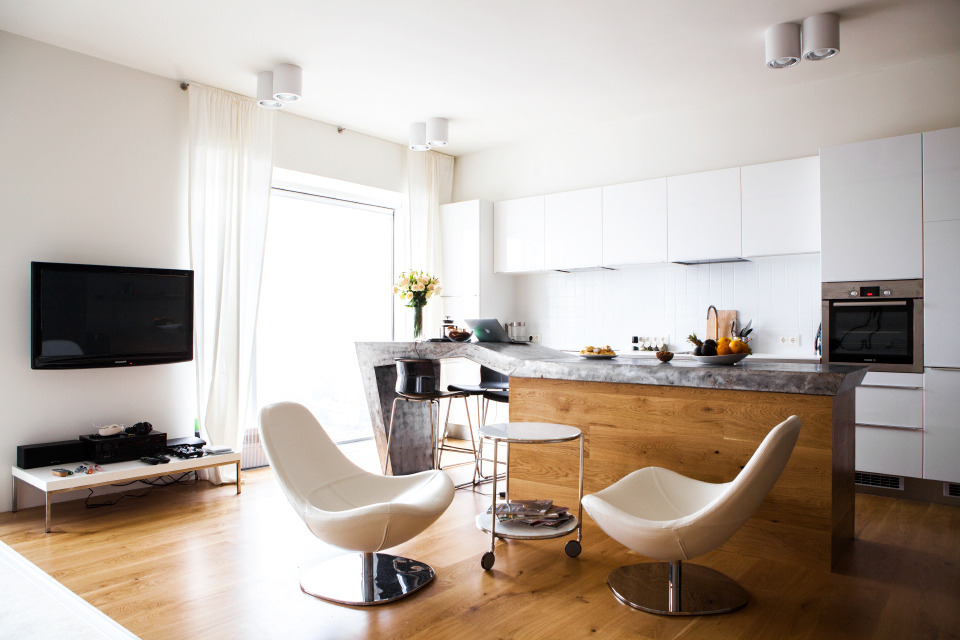 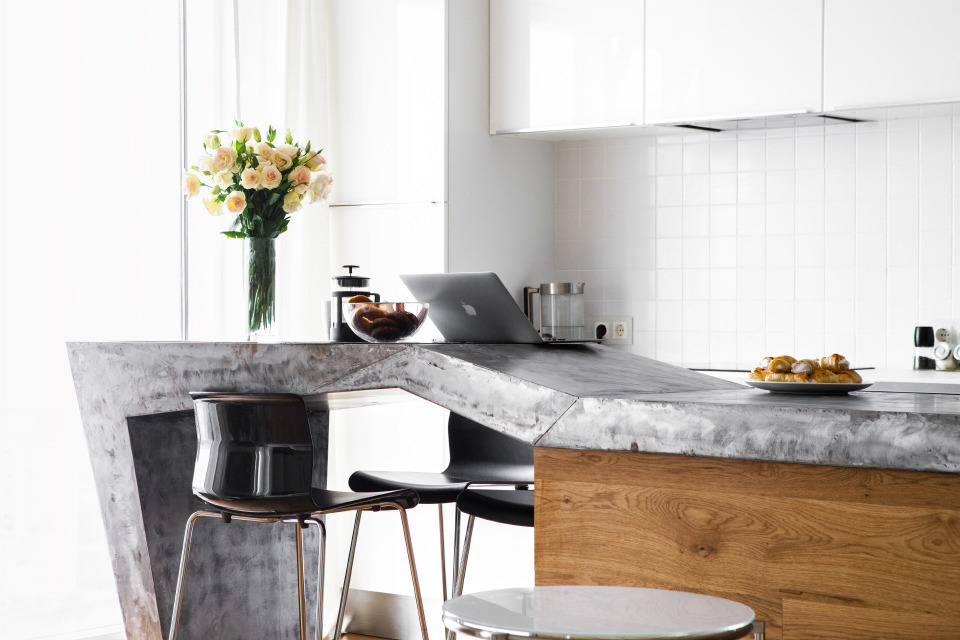 The kitchen is SieMatic. 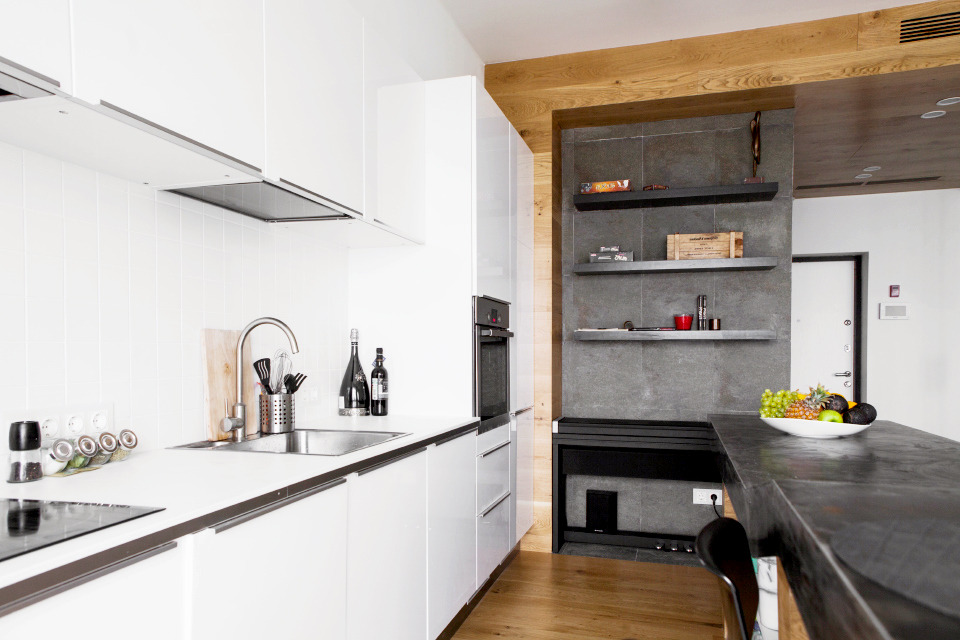 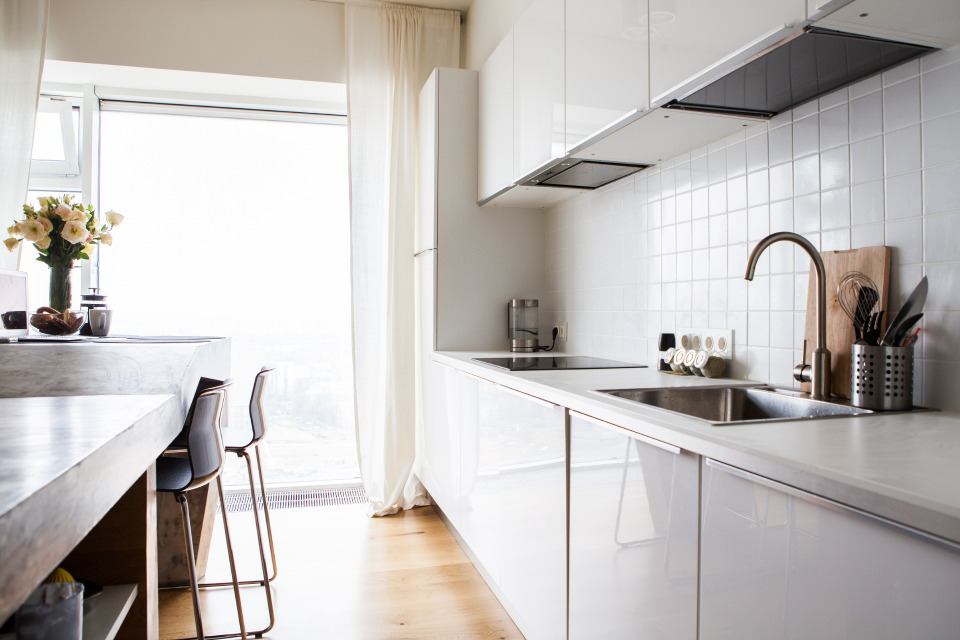 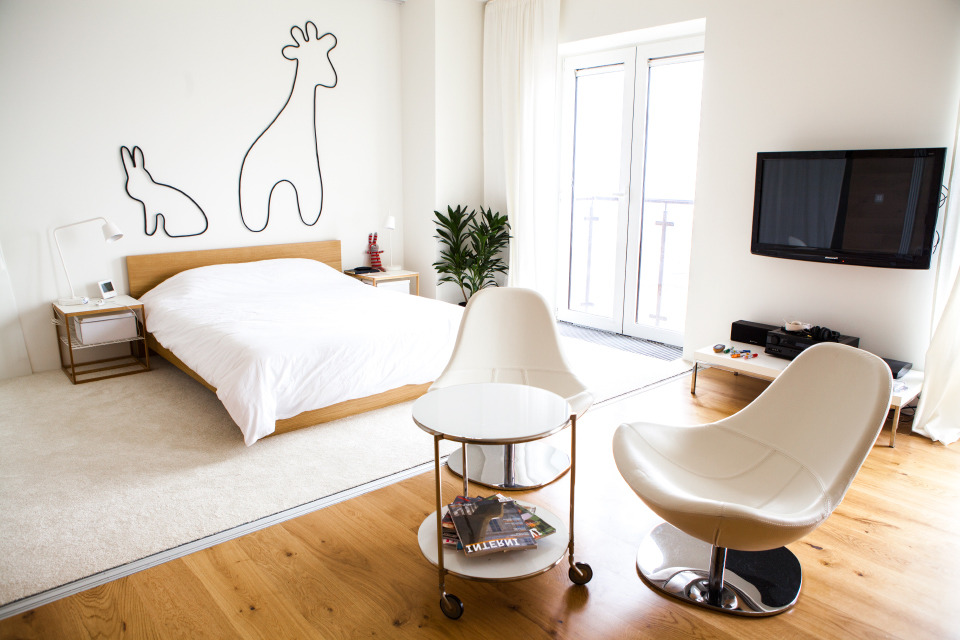 The cushioned furniture is Rolf Benz. 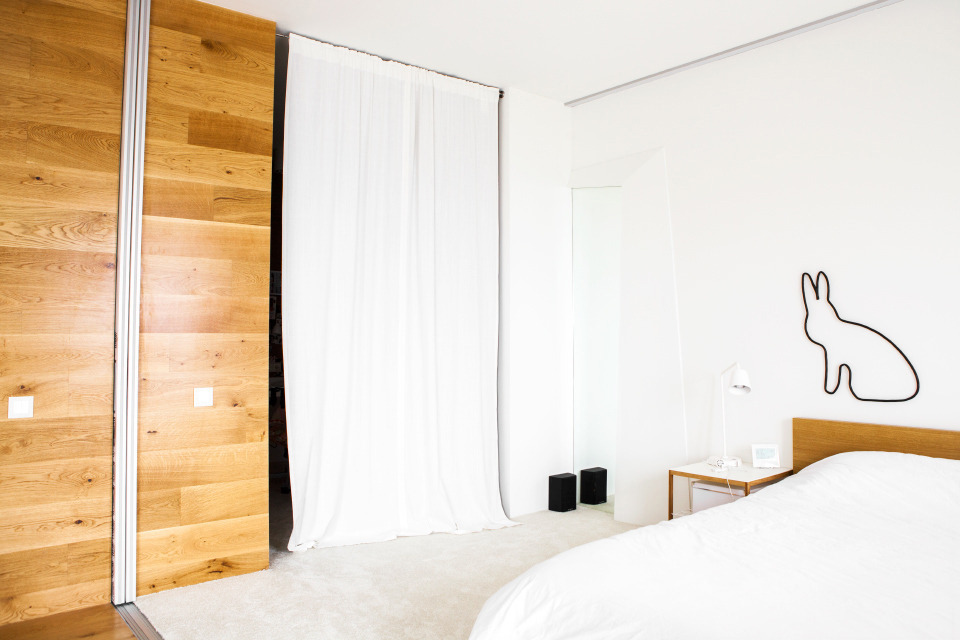 One more complex interior structure – a white framework which makes a mirror invisible from the bed – became an asymmetric response to the kitchen island. The bed is Interluebke. 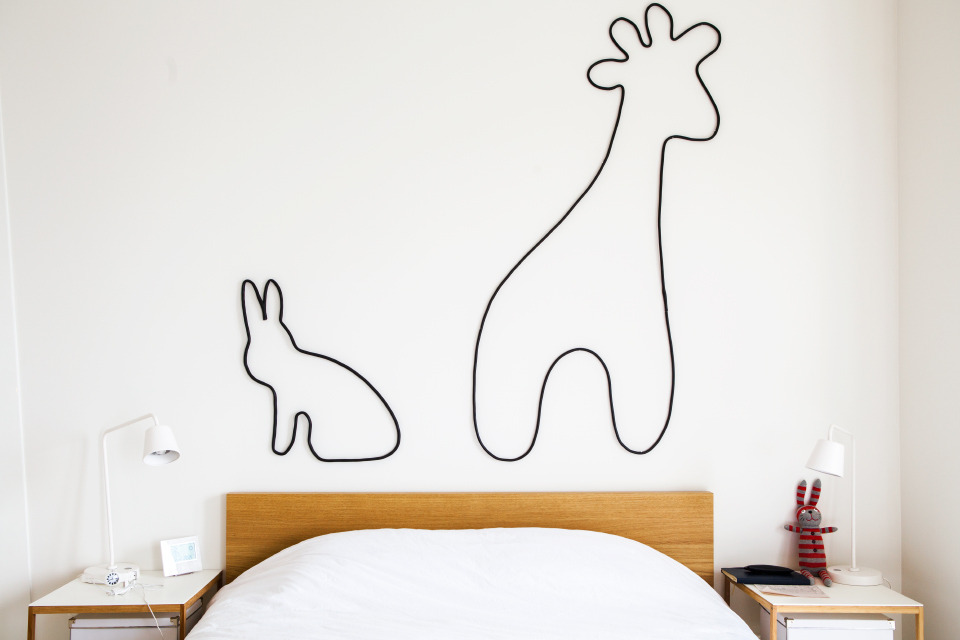 Contours of a hare and a giraffe – owners’ kawaii alter ego – are made by themselves from an ordinary black cable. 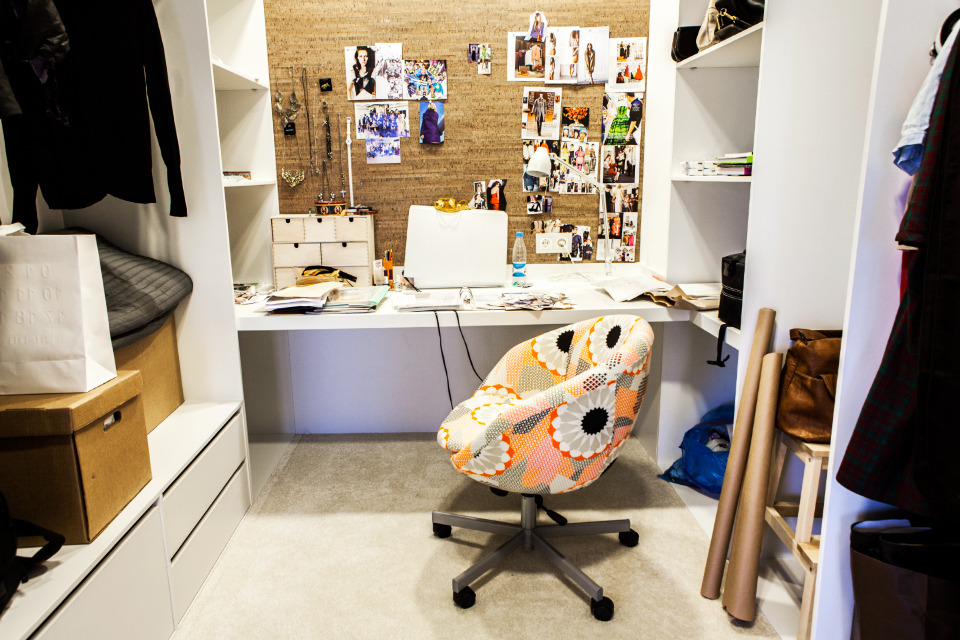 Initially Peter didn’t understand what for Nastya needed a separate area for a wardrobe room while there is a large mirror wardrobe at full length of the entrance hall. But Nastya as a young designer organized a comfortable working place here. 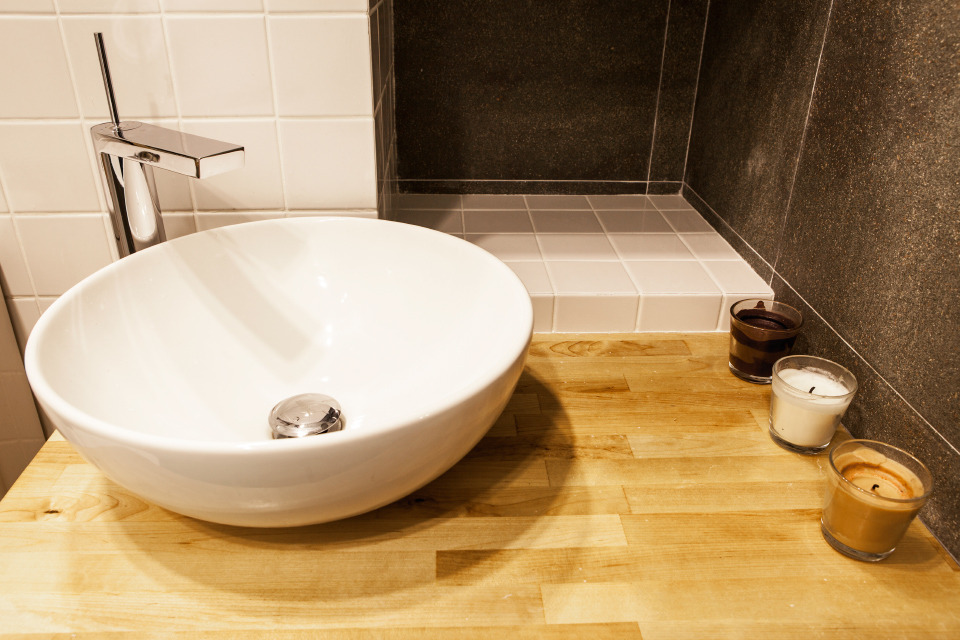 The sanitaryware is Am-Pm, Hansa. 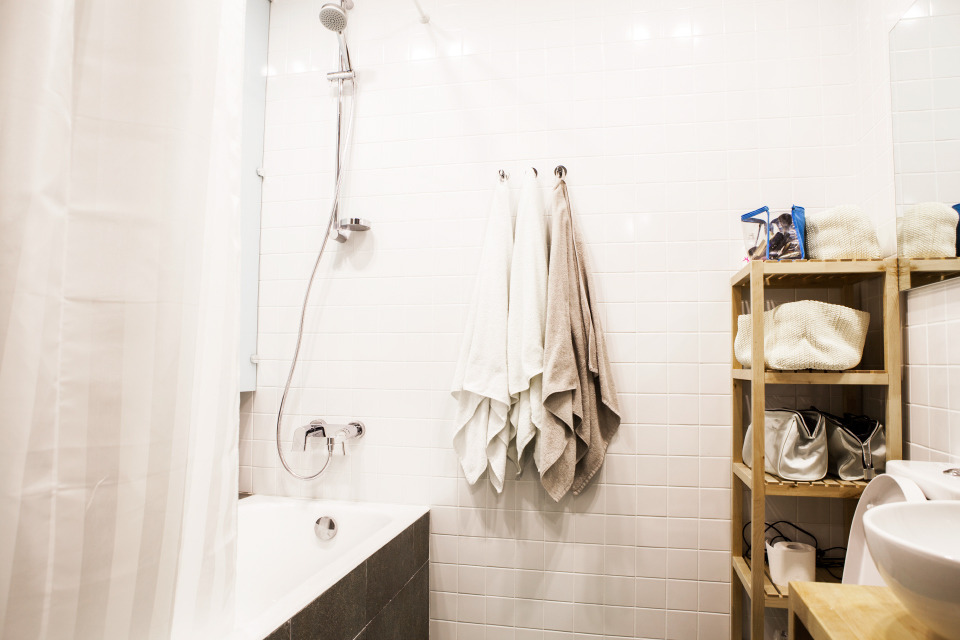