Yulia and Denis bought an apartment in a house near Bolshoy Prospect two years ago. They had rented an apartment before. But after they had calculated how much money they spent on renting, they decided that it was more profitably to buy their own housing. There was almost nothing in the apartment except for an old sink, a geyser in the kitchen, and an only operating socket. Only the bathroom was suitable for use, that’s why it was left unchanged.

A work gang put the apartment in order for two months, and Yulia and Denis began to set it up. The house was built in 1913 for single officers, that’s why all apartments had a typical layout: one of the rooms was intended for a striker, the second was a small officer bedroom, the third one was for entertainment. As a first step the owners decided to break down one of Gyproc walls, and the apartment turned into a two-room instead of a three-room apartment. Some details remained from the original officer interior: for instance, a winter refrigerator under the ceiling was adjusted for vegetable storage. 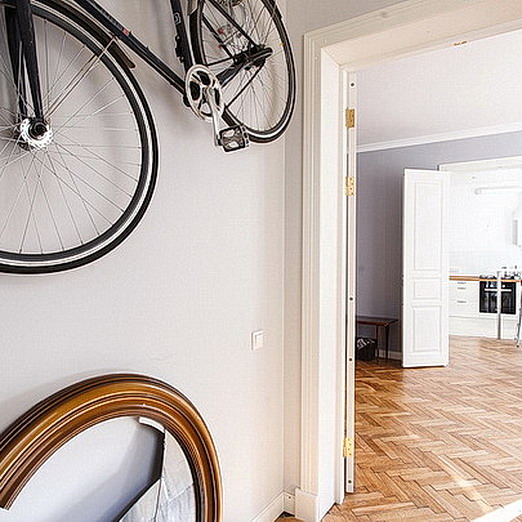 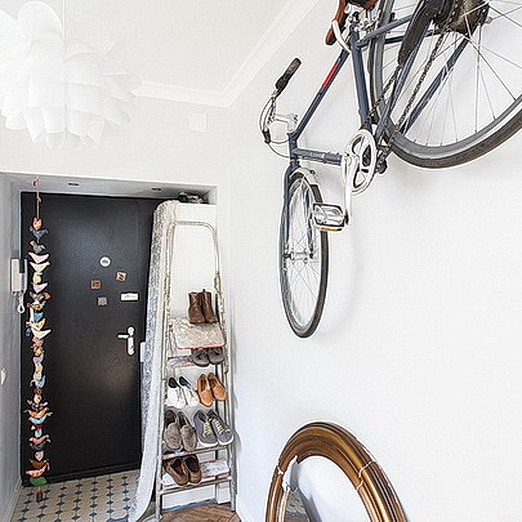 The owners think that premises have been interiorised by half yet, but ideas on their changing appear up till now. They took most of designer solutions from Swedish blogs and adapted them for their apartment. 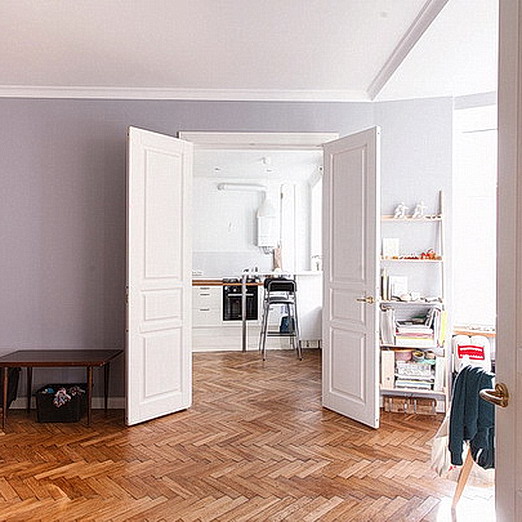 For the most part the furniture was bought in Ikea, and some stacks for the living-room were ordered from the familiar carpenter. Some things which remained after the repair were adjusted for current needs. For instance, a step ladder in the entrance hall was turned into a boot rack. Souvenirs, placed throughout the apartment were brought from trips. Cushioned furniture will appear in the living-room with time. The owners want to place a sofa, arm-chairs, and a large table for house parties. 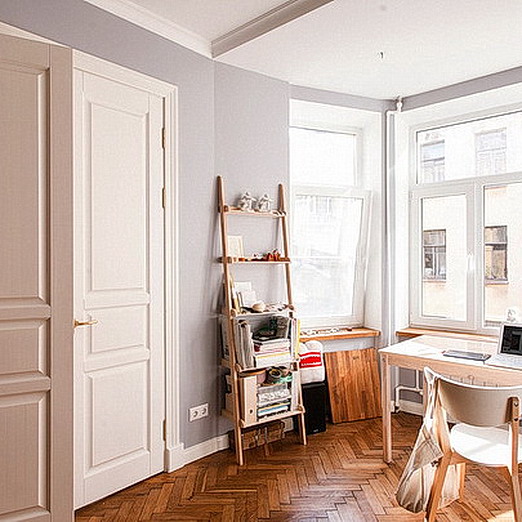 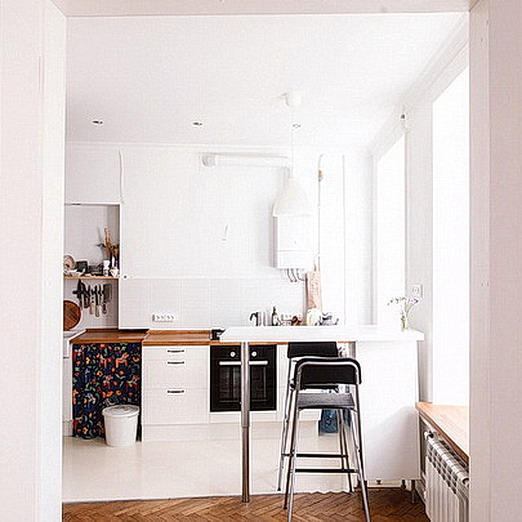 Even though windows face a sunny side, Yulia and Denis decided to do without curtains. That’s why there is a very bright light in the living-room and in the kitchen. On practical grounds self-leveling floor was made in the kitchen in contrast to other rooms with parquet in a herring-bone pattern. Rooms were connected by large new doors which are often left opened so that the apartment seemed more spacious. Initially the owners wanted to place a sofa in the kitchen but then understood that it would be out of place in such a small room. They decided to organize mini working place there instead. 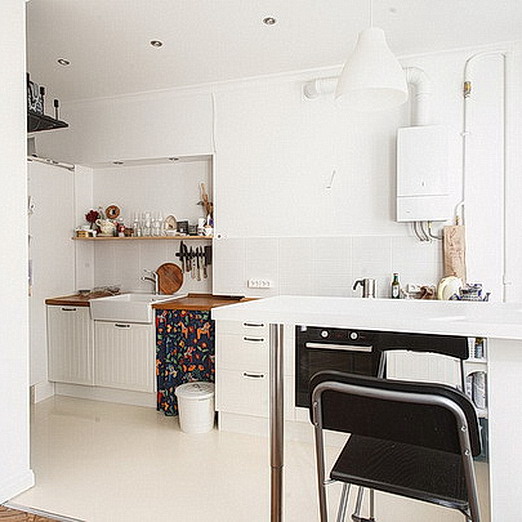 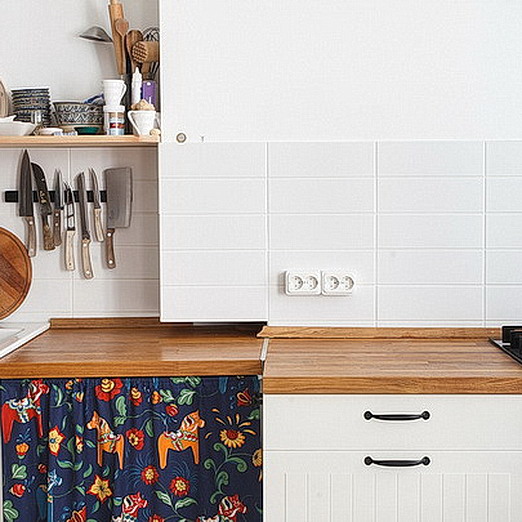 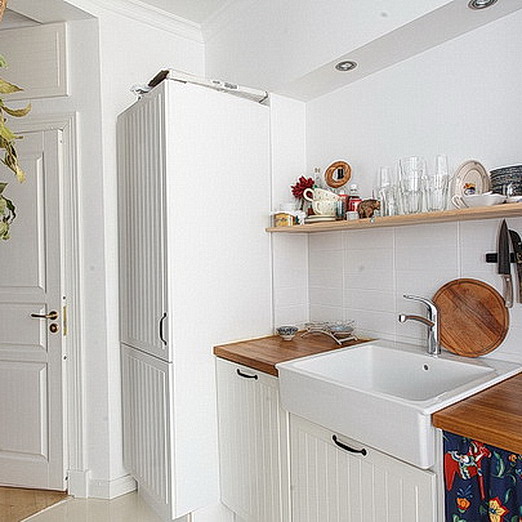 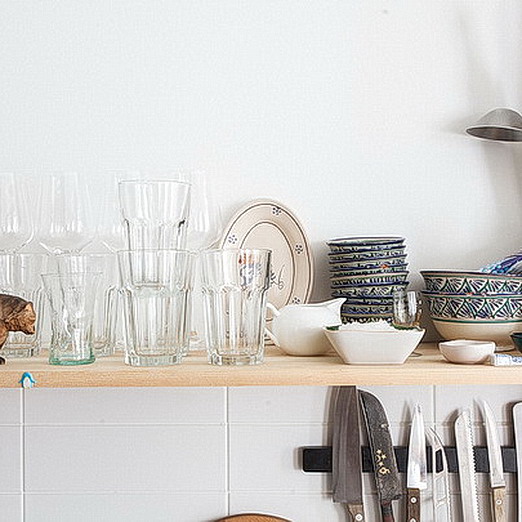 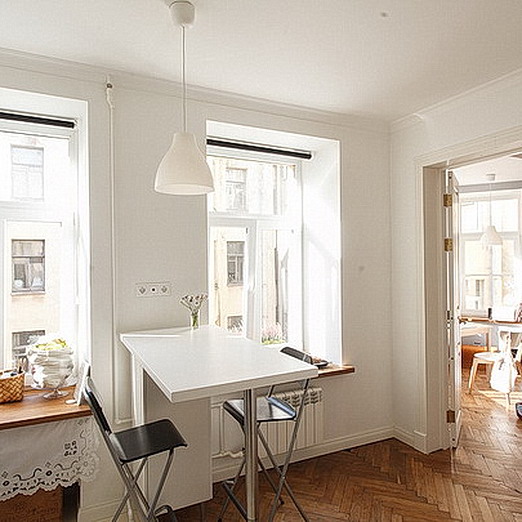 Lace in the bedroom fell to Yulia from her grandmother hereditably. Two birch logs were used instead of a bed-side table, and a thin tree trunk instead of а curtain rod. A post card in a frame is the work by Finnish artists Polkka Jam, whose creative work is interesting to the hostess. The names of two Jack Russel Terriers are Karton and Varezhka. 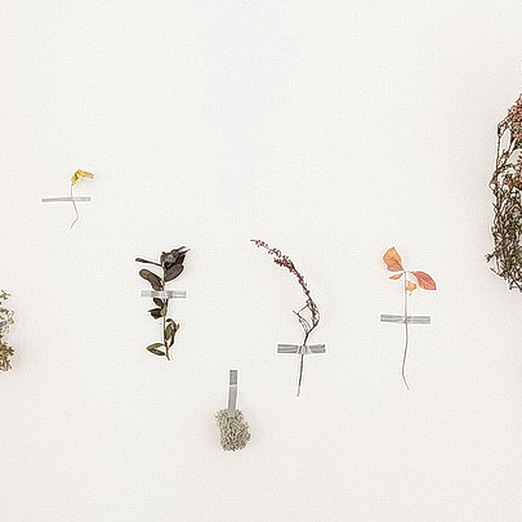