OWNERS
Yuel (interior photographer, a student of the Royal Institute of Technology) and
Alina ( recruiter in the international recruiting agency)

Alina and Yuel purchased their apartment in a comparatively new district Hammarby Sjustad (literally: “town by the lake”) southward of the island Södermalm, where the main boutiques, coffee bars, restaurants, and bars of Stockholm are situated, a year ago. Free ferry goes to Södermalm from here every 20 minutes. The district itself was industrial some time ago: textile factories, other industrial buildings, and a sea port located here. In the early 90s the project on the territory reinvasion began and it was decided to make the district ecologically clean. Many houses were fitted with solar cell batteries, biogas was laid to some apartments, and the whole territory is covered with bicycle lane network now. 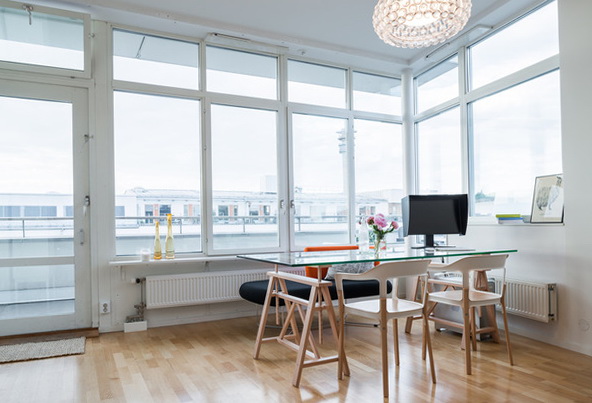 The house had belonged to the management company before, and apartments had been rented out. On the whole it is a common occurrence for Sweden, which conditions some peculiarities of Swedish apartment decoration: white walls, typical kitchens, and light tile in bathrooms. As the management company wants the dwellers to keep the original condition of apartments, they take the repair easy. It set up a tradition of Stockholm design: even those who purchase apartments but not rent them, often do not hurry to get rid of white colour in the interior, because it is easier to sell “white apartment” in future. 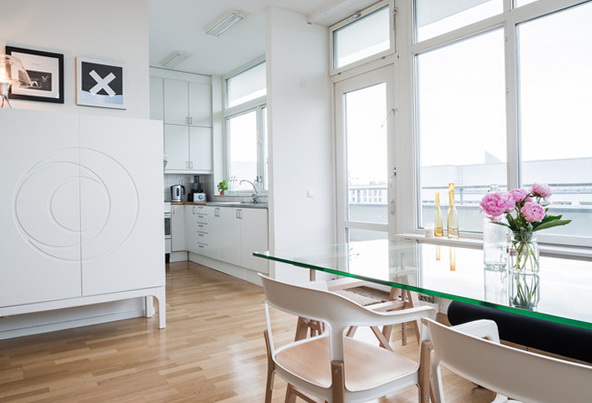 When the owners selected the furniture they were guided by its functionality primarily. A large table Teatro by Magis became the central element – the owners work at it, play table games with friends, and simply communicate. If the monitor is removed, eight people can sit here at supper with ease. 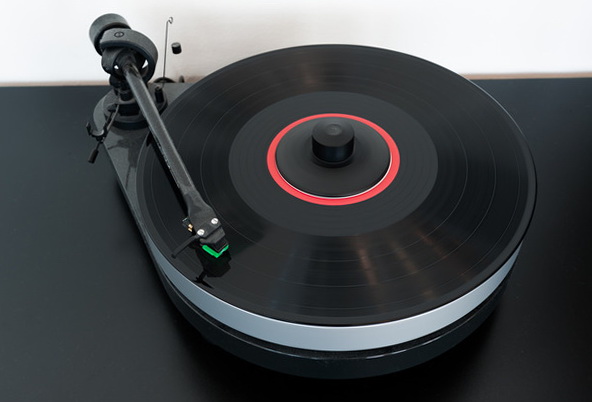 Mobility is the second principle which the owners adhere to. The chairs Steelwood, Ronan & Erwan Bouroullec, the armchair Select Largo, Inno, and even the sofa Bondo can be moved throughout the room with ease, creating different combinations for supper, videogames, or dances. 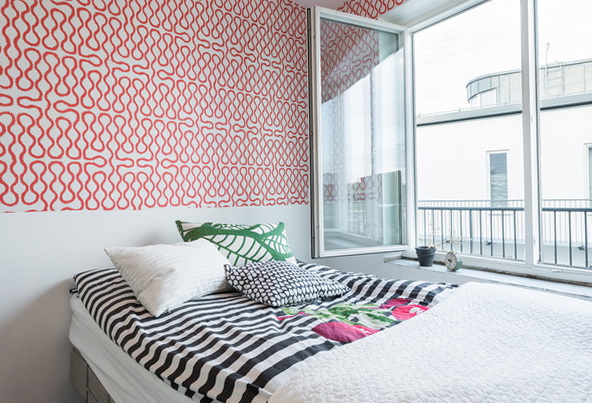 There was almost no need in repair in Yuel and Alina’s apartment. New floor from dark solid oak was laid and new wallpaper (Squiggle Vivienne Westwood for Cole & Son) was put up, the old wardrobe was removed and a new one was placed in another place in the bedroom. The bed was located so that a view of the lake opens. 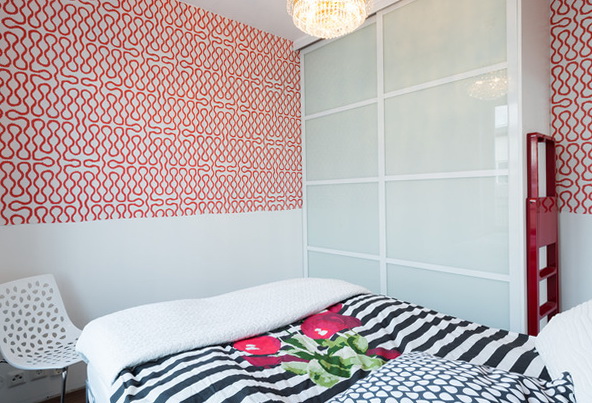 The owners adhere to minimalist views on the interior decoration, that’s why they didn’t clutter up the apartment neither with books, nor with trifles. For all these things they thought up the storage system (a white case and a black chest of drawers Ikea) in the living-room, and also in the entrance hall and in the corridor (an integral interior item of all Stockholm apartments is suspended shelves and String system lockers). 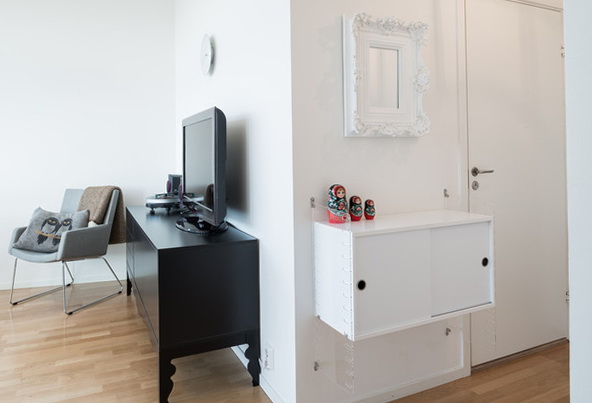 Covers of favourite records The XX and Joy Division, the clock Banker’s by the designer Arne Jakobson, and also the picture by Swedish paintress Jenny Klingvall decorate the walls. The illustration by the owners’ friend Nina Pechkovskaya, made for Stockholm shop, stands on the window. 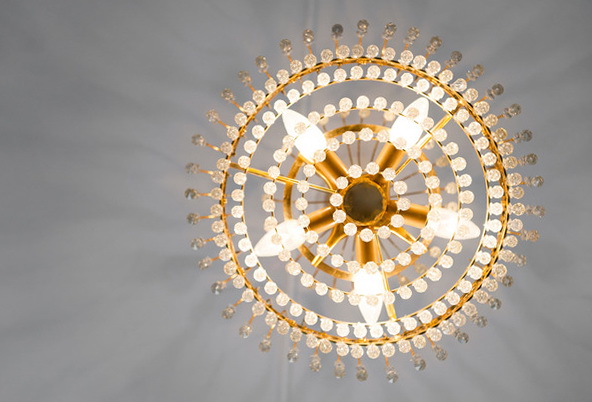 Alina likes the lamp Caboche by designers Patricia Urquiola and Eliana Gerotto very much. It took a lot of effort for her to assure Yuel that this Italian monster would blend in with the Nordic interior of the apartment. All other lighting is Scandinavian: the standing lamp on the wardrobe of Danish production Holmegaard, Work Lamp from Design House Stockholm in the corridor, classical Swedish cut-glass chandelier in the bedroom, bought by Yuel’s parents as a present for a housewarming party at the auction sale. 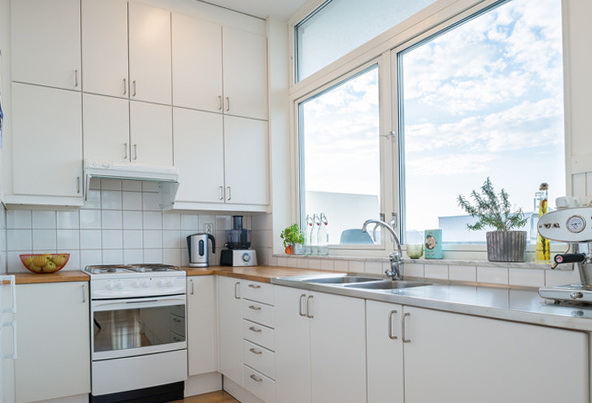 Everything was left almost unchanged in the kitchen and in the bathroom. They didn’t remake typical kitchen, but only added some bright spots. Sterility in the bathroom was added with monochrome textile Society, plants, and wall clock Eye by the designer George Nelson. 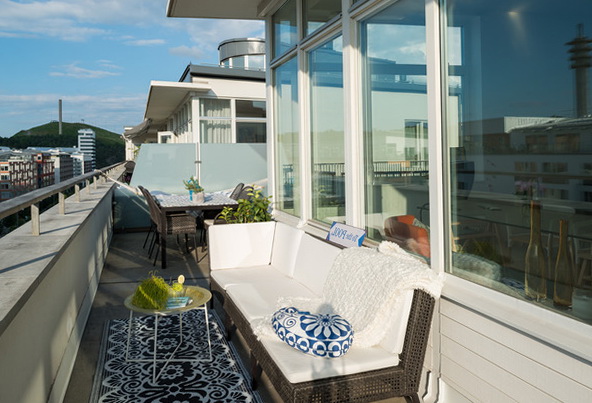 One more room, into which the terrace is turned, appears in the apartment in summer. Here the owners spend most of their time. All street furniture is from Ikea, it was cheap and withstood severe Swedish winter perfectly. This season the owners bought a hammock Granit – Alina’s long-nurtured dream. The plate “To the pool” has appeared here recently too. There is a basin thereabout, but in the opposite direction.

The blue wicker jar for wine was found at Udelny market in Petersburg, the owners water few balcony plants from it, the quantity of which will increase in future. 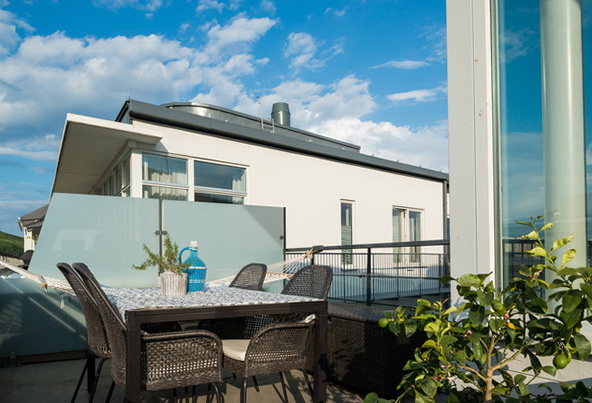 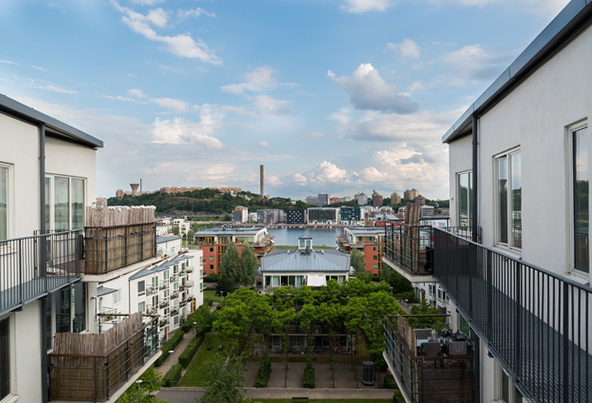 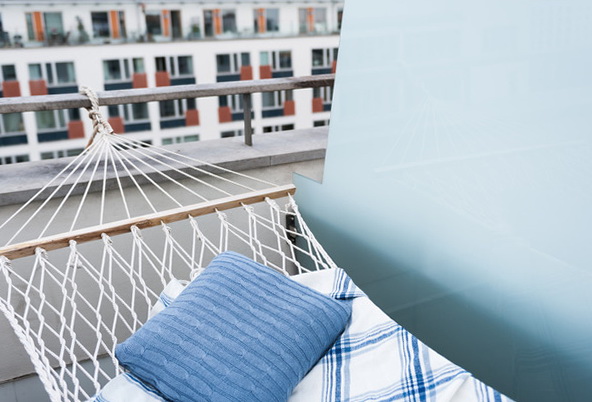