Mikhail and Natalya moved into their own apartment in a new building more than a year ago. They had been furnishing the apartment for several months before housing. Their friends helped them to make cosmetic repair, but they made interior decisions by themselves.

A substantial relayout was organized in the apartment for a start. At first part of the wall in the corridor was removed, and a kitchen with a bar counter instead of the table was transferred here. A bedroom was located in the freed kitchen premise, so a one-room apartment was changed into a two-room apartment. It was decided not to make blank walls in order not to reduce a small space. The bedroom is perfectly visible from the living-room through a lath partition, and the kitchen is visible from the bedroom. It was decided to use only two doors – the entrance door and the one admitting to the bathroom.

A single style is not adhered to in the finishing, surfaces with different finish are used on all walls. Part of them simulate industrial or technical surfaces: a carelessly whitewashed brickwork near the window, untreated cement wall in the bedroom, and corrugated metal in the kitchen

The owners want to change the living-room appearance with time. They are sure only in the sofa definitely. They have been looking for necessary materials for a big stack, which they are going to make by themselves, for several months already. Meanwhile they make do with a self-made table and shelves. 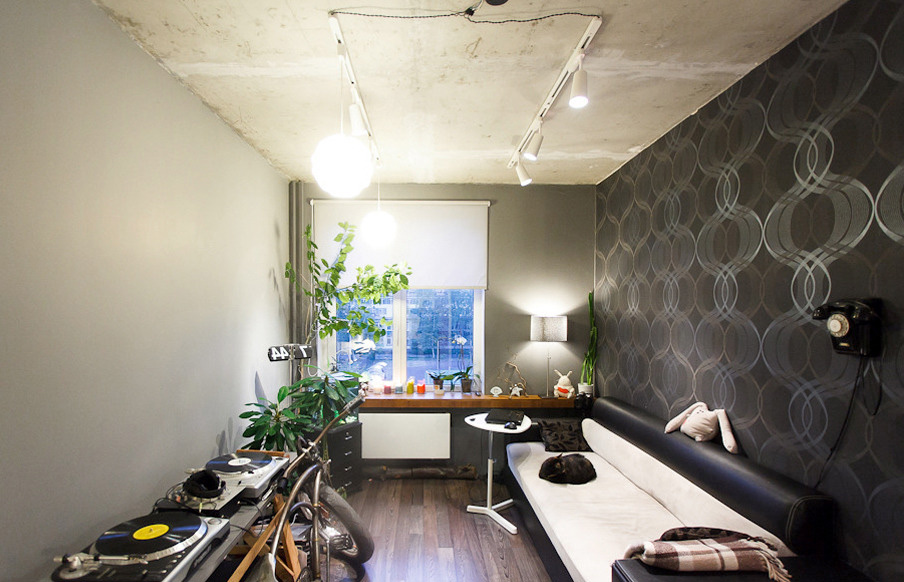 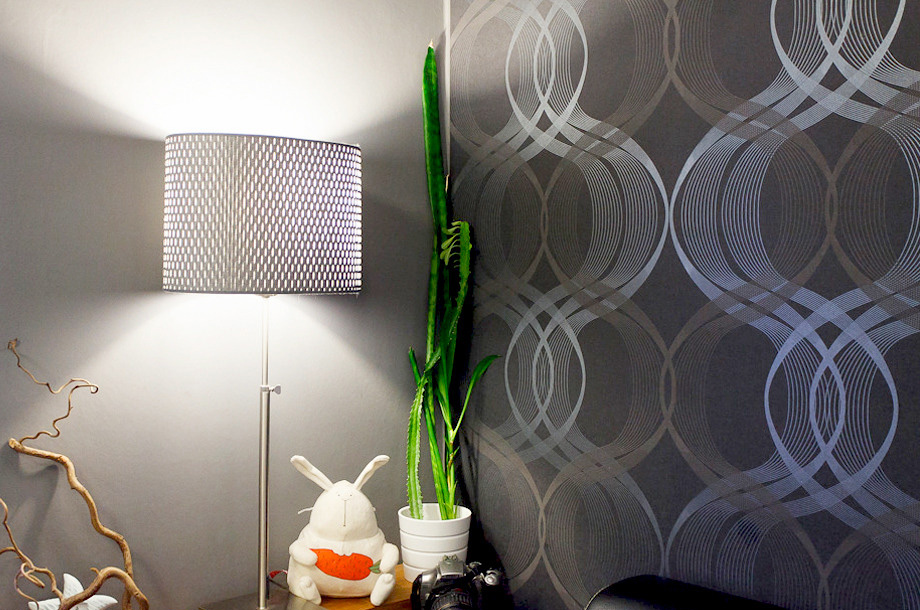 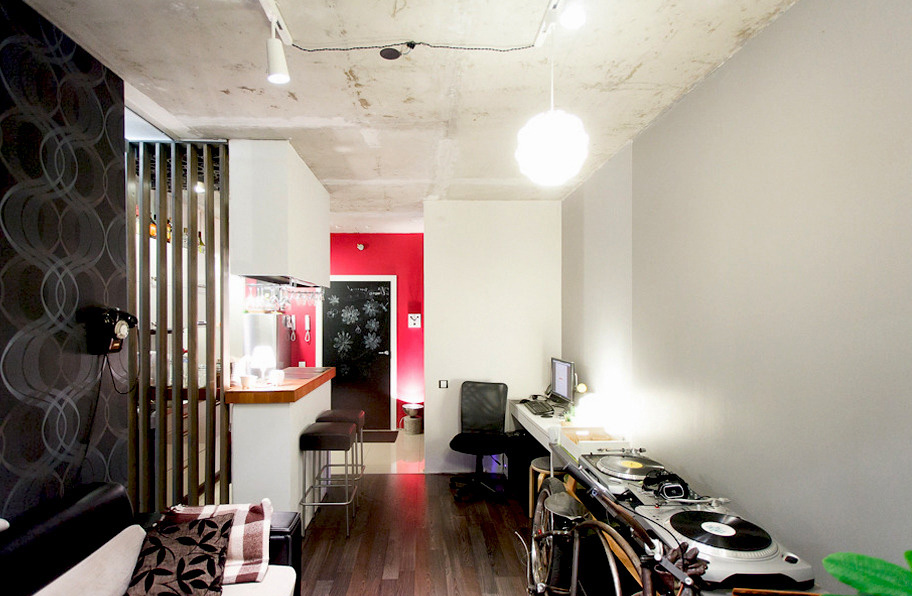 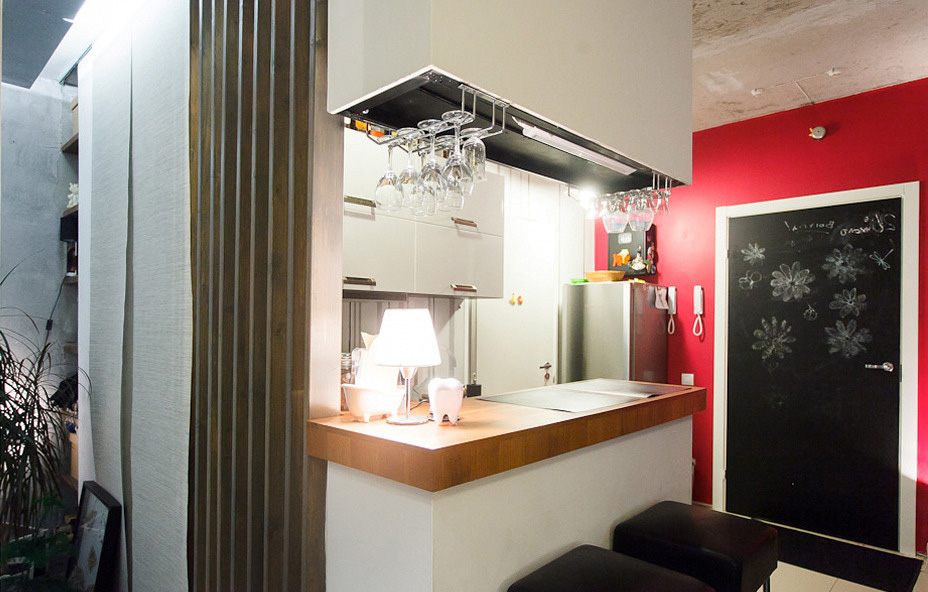 The owners had made a bar counter before kitchen purchase. Its tabletop is from teak board hewn by hand. A window sill is made from the same material. The wallpaper in the kitchen zone is also handicraft: Mikhail and his sister ornamented it. An unexpected solution was found for the ceiling in the kitchen: it is decorated with insulant for water supply pipes. 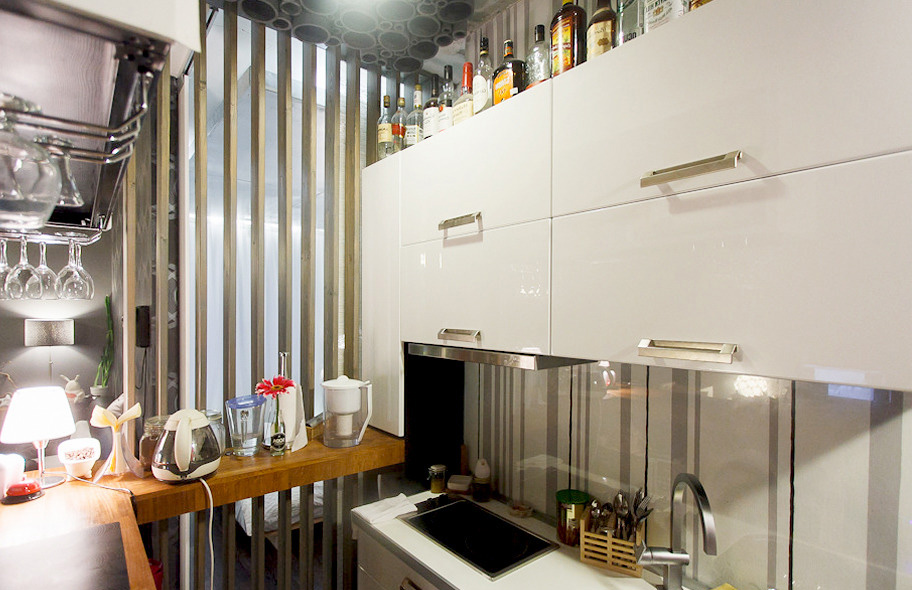 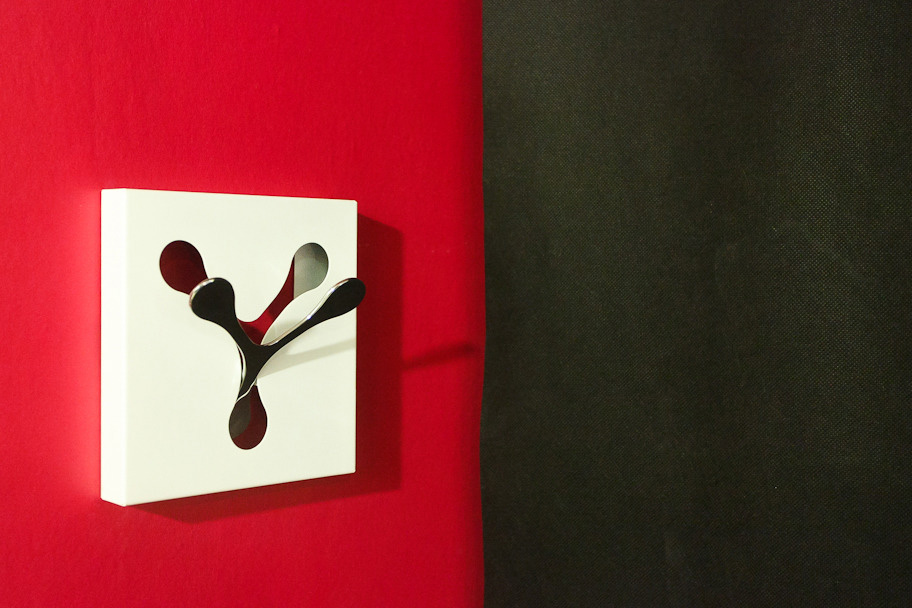 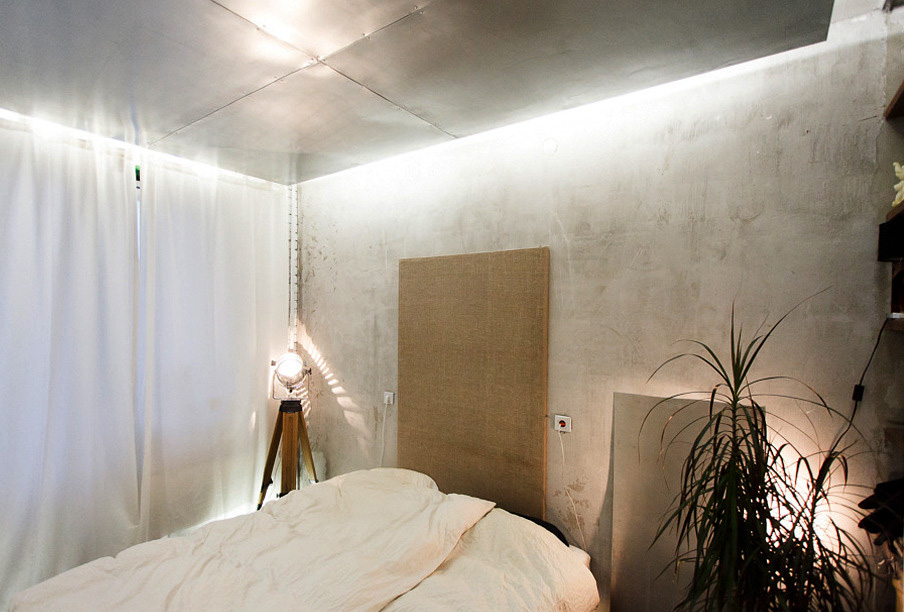 The bedroom is located in the premise where there had been a kitchen before. The most difficult thing was to decide on the ceiling decoration. Mikhail decided to veneer the surface with roof aluminum after he had visited one interior salon. One of the walls was left without finishing. Brutal concrete facture looks good through a partition from the living-room. The opposite wall was put up with Swedish wallpaper with soft pattern so that the bedroom does not look too aggressive. The lamp is home-made: legs were presented by a friend, and a club floodlight was found at the jumble market. 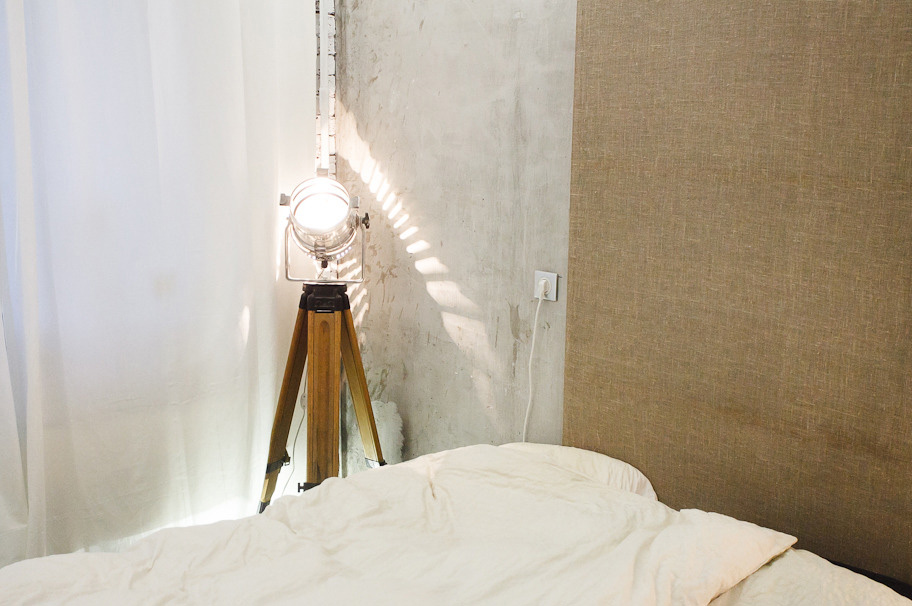 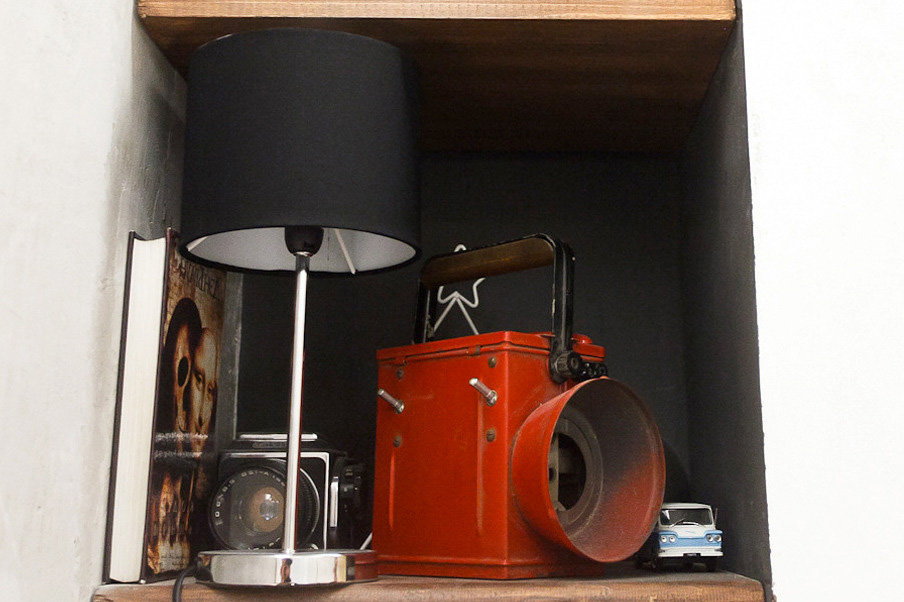 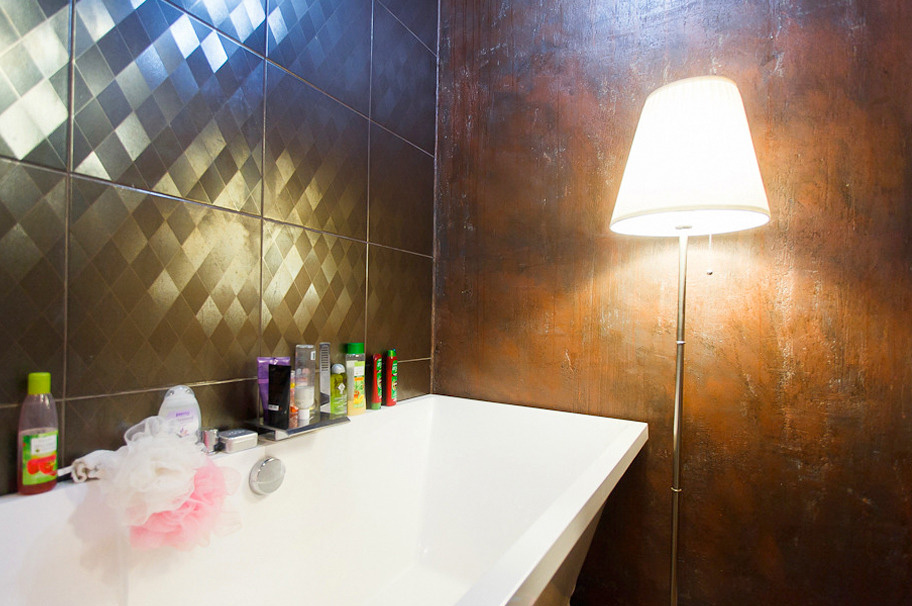 It was decided to make the bathroom dark and brutal. The idea of a corrugated ceiling came after purchase of aluminum sheets for bedroom. Mikhail found relief roofing iron in the shop, and he wanted to use it somewhere in the apartment. The host saw such material in the interior magazine for the first time. The floor in the bathroom is also from teak board: it is quite smooth and warm, that’s why there is no need in heating. 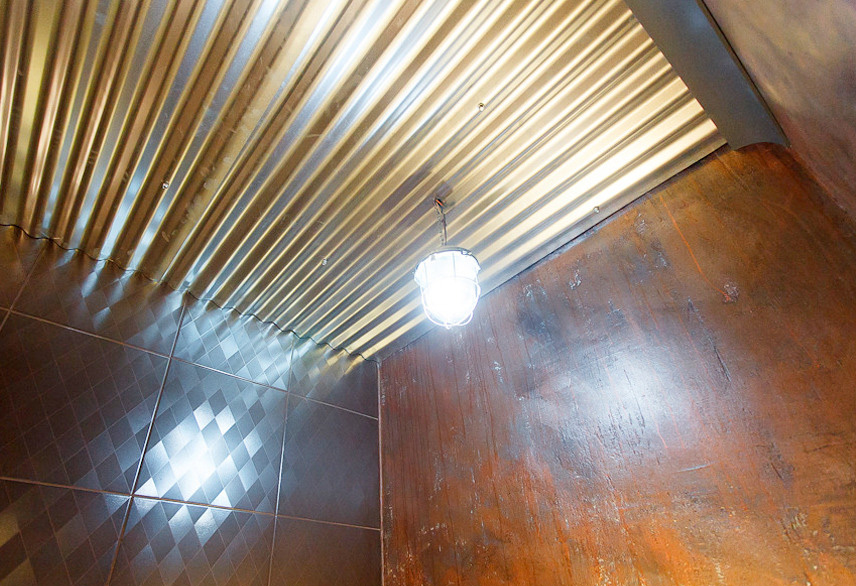