A three-room apartment in a minimalist style with panoramic windows, trees in tubs, and a guest room.
OWNERS
Larisa – deals in advertisement
Andrey – deals in development and architecture

Andrey bought an apartment in Residential Complex “Kutuzovskaya Riviera” in 2007 at the stage of construction. The district attracted both by its convenient location with the developed traffic interchange and by its ecological cleanness – the river Setun and the Volynsky Forest are located nearby. The house was commissioned in a year and the repair was begun in the apartment which represented an empty perimeter. The layout project was developed by Alexandra Logvinova who suggested interesting solutions at once, based on the owners’ needs: a fully functional guest room and a bedroom, and a spacious and light living-room zone – Andrey and Larisa often invite guests and have supper. Stylistically the owners prefer European minimalism, the use of light colours and simple forms.  Many interior objects that the owners liked were a long wait or they were worth money. This problem was solved thanks to Larisa’s enterprising sister. All curtains including curtains in the bathroom, a banquette from white leather and a carpet with the same welting are her works. For a carpet which costed about 7,000 euro in Italy Larisa and her sister chose a floor mat in the saloon at Frunzenskaya station and had it done over with the same leather which was used for the banquette. A wardrobe, in which utility supplies are also hidden, is inbuilt at full length of one of walls. 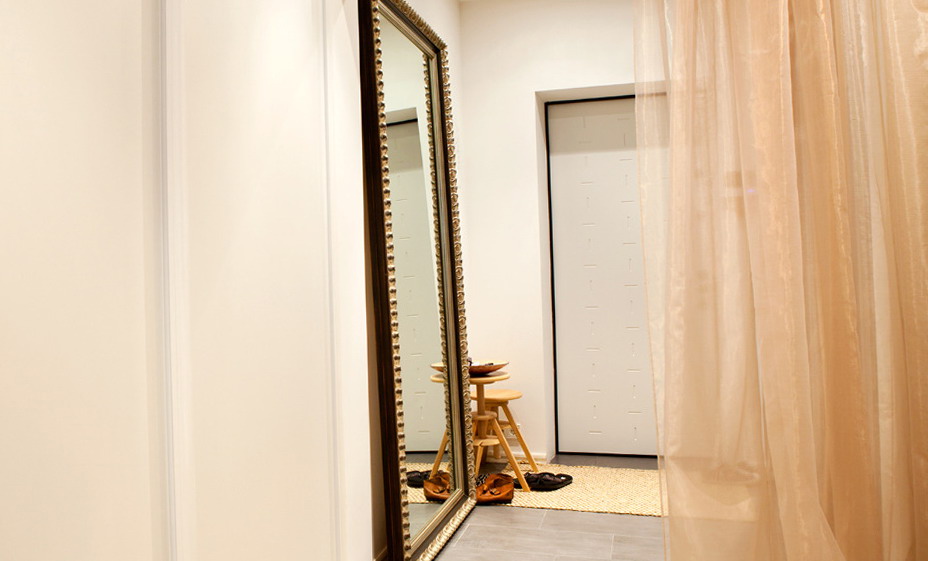 Works on layout and finishing were finished at that time: all walls were erected, a new floor was laid, doors and sanitaryware were installed. Nevertheless the apartment was not used up to winter of this year, when the owners decided to move here finally. Not waiting for ordered furniture Andrey and Larisa collected minimum of things from the previous apartment in one day and moved into an empty space – there was only one sofa there for that moment. Most of the furniture of Italian brands was brought by friends – the company Total Interiors Group – from factories, or was made by Larisa’s sister, who creates clothes, furniture, and interior objects as a hobby. 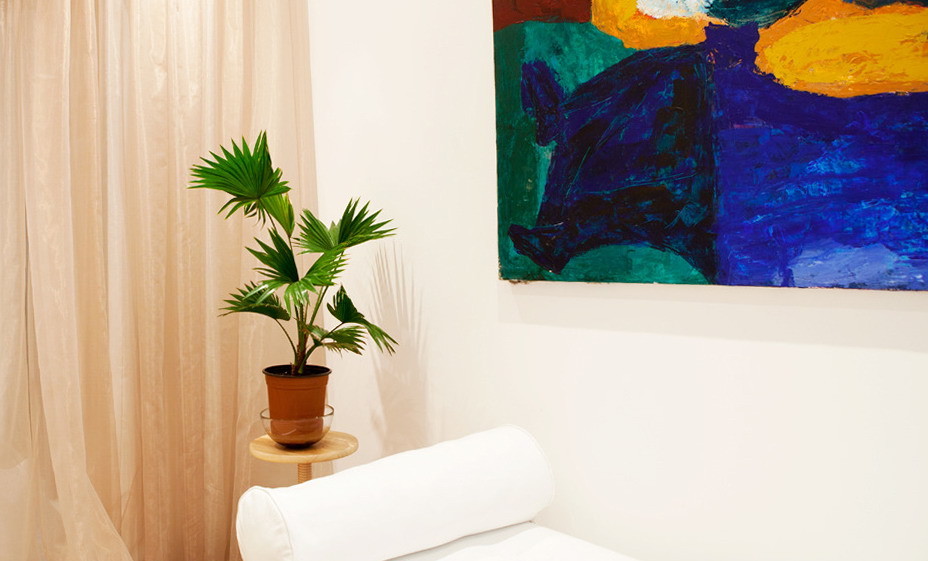 Though Larisa does not like a mixture of styles in the interior, she wanted something that would outlook from the overall picture in the entrance hall. The mirror in classical style was ordered by the hostess in a small picture framing studio on Filevskaya street. 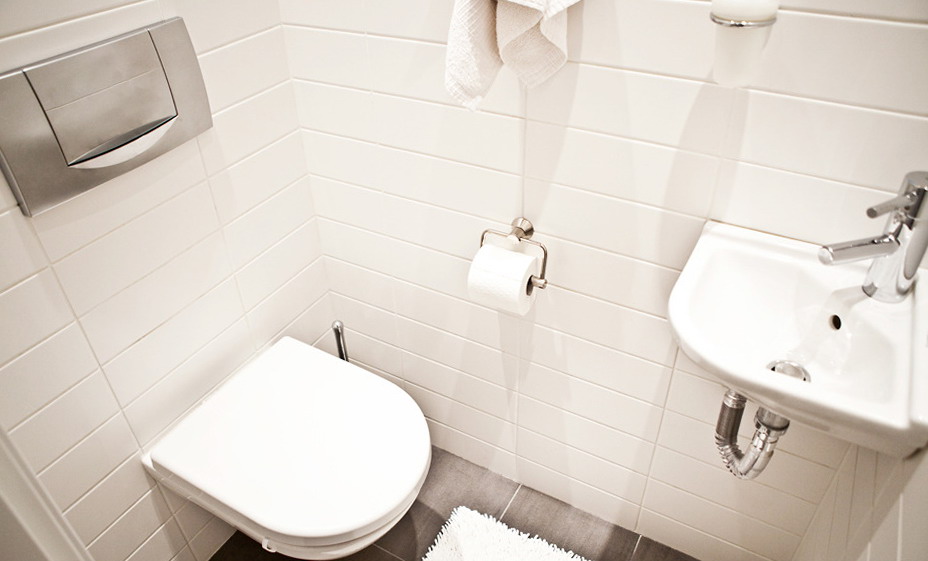 The door from the right in the entrance hall admits to a guest toilet. 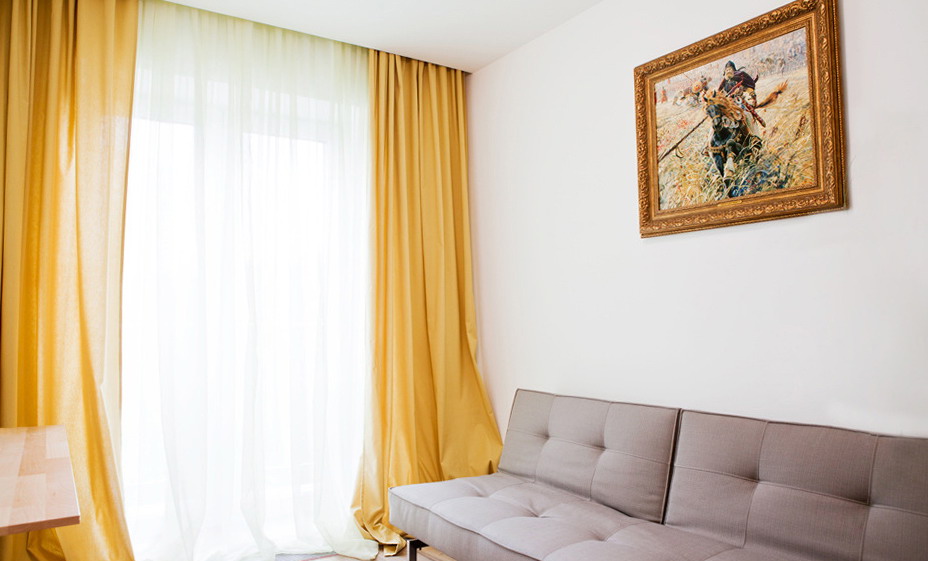 There is a guest room with one more WC-and-bathroom unit opposite the guest toilet. Thus this space has not been finished yet. The owners are looking for a dream sofa and are planning to hang a shelf here. The picture “The Victory of Peresvet” is a present for Andrey from his colleague. The sofa is of Danish brand Innovation. 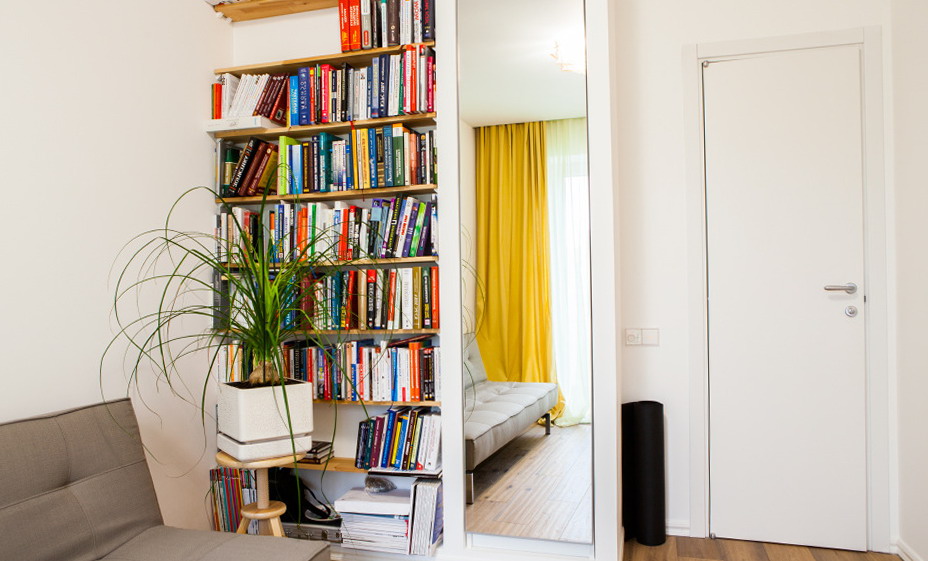 The library consists mainly from books of Nobel laureates. 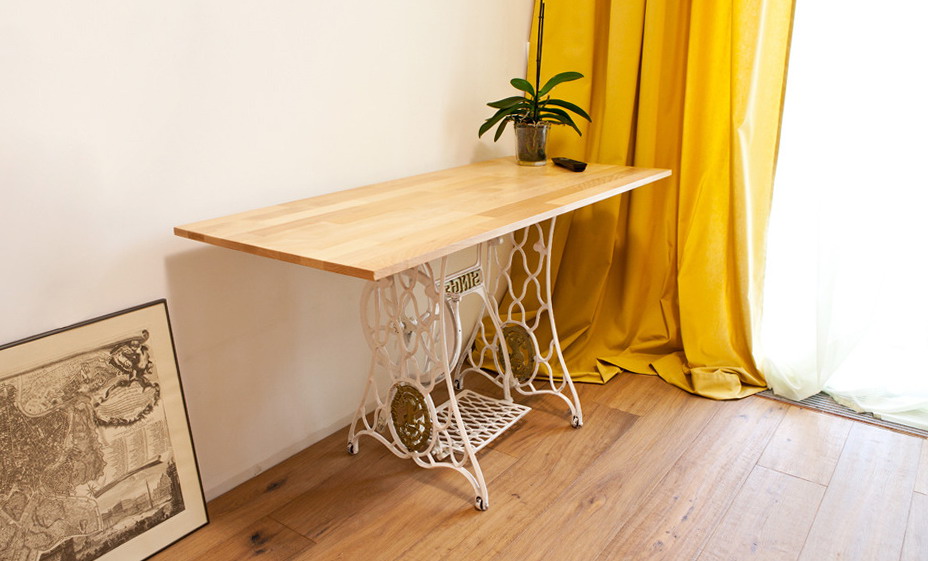 Larisa bought the sewing machine Singer of 1912, from which a table basement was made, on the site Avito.ru. The basic colour in the interior is white. It is absolutely comfortable for both owners, it adds airiness to the apartment, and allows to play with the space due to contrasts and bright details. 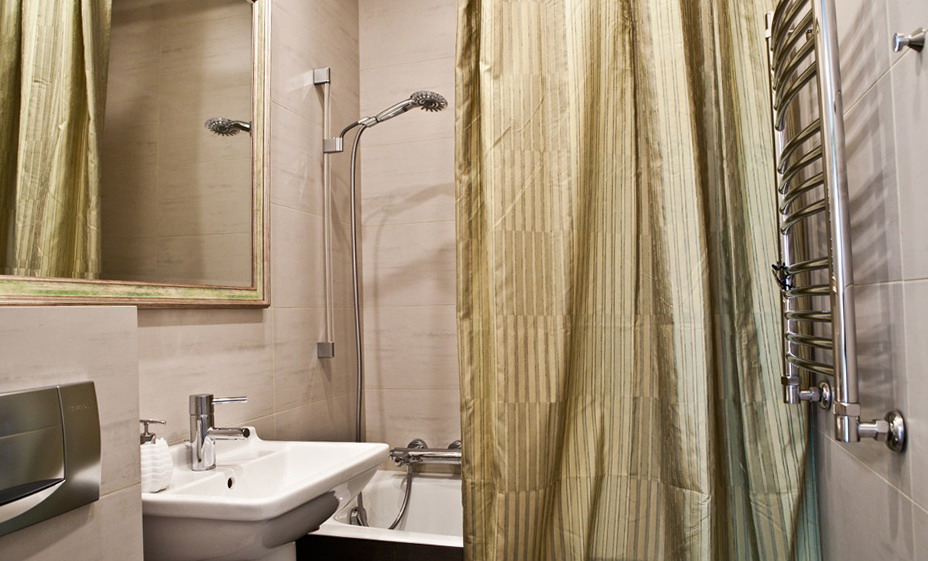 Initially both the splash back and the tabletop were made from gleamy black Corian (artificial stone) but afterwards Larisa decided to decorate it, and mosaiced it from natural stone found in “Krokus”. 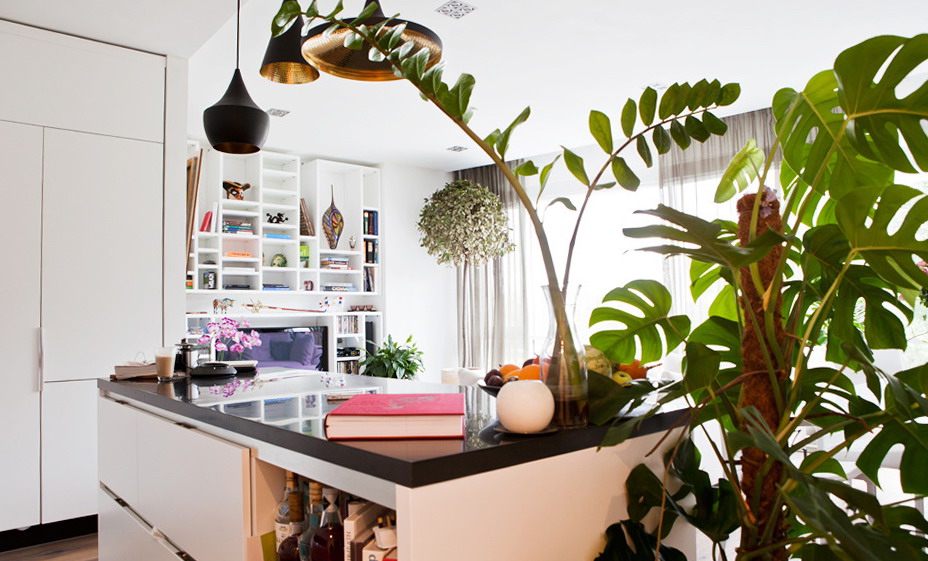 Only two piers were planned in the apartment with a free layout, so that their sections divide the space with panoramic windows at full length of the premise. The owners decided not to do it, leaving the living-room zone opened and lighted to the utmost. In summer the sun drenched living-room looks especially glamorous. In accordance with the owners’ words there is no need in pictures. A green landscape outside the window performs a decorative function perfectly well. Cushioned furniture in the living-room is one of the favourite brands of the owners – Italian B&B. Curtains are Larisa’s sister creation. 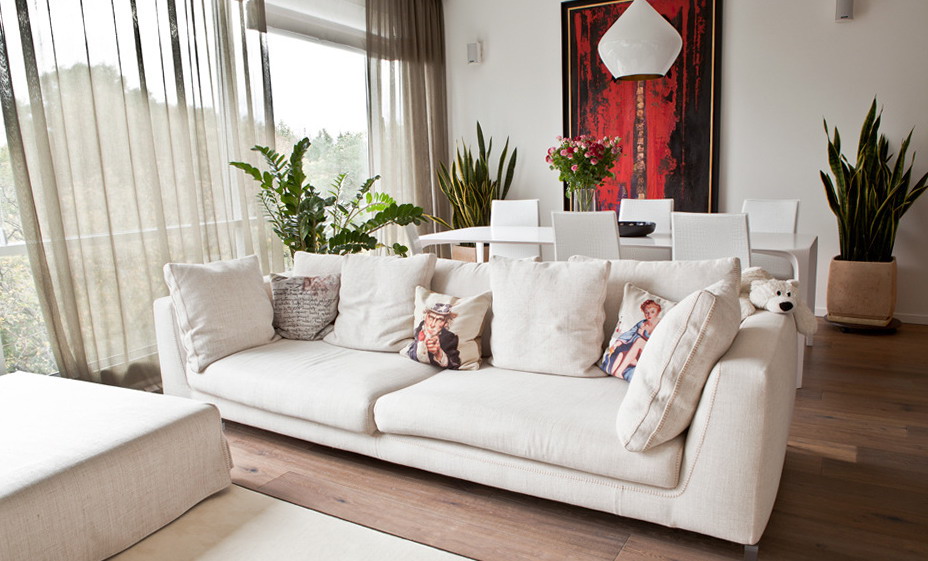 Larisa is responsible for many plants in the apartment. A laurel was planted due to the area and ceiling height. Besides its decorativeness it is also useful in culinary experiments of the hostess. 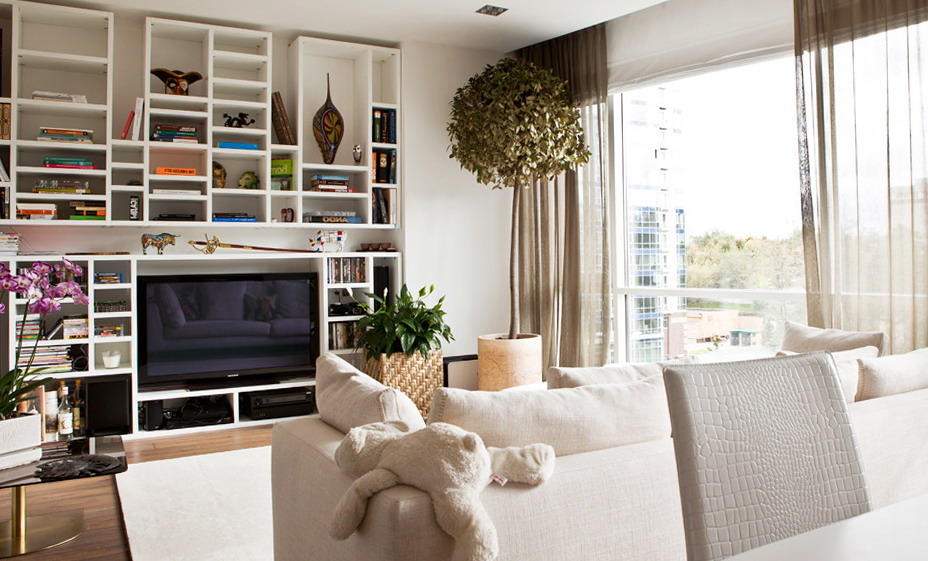 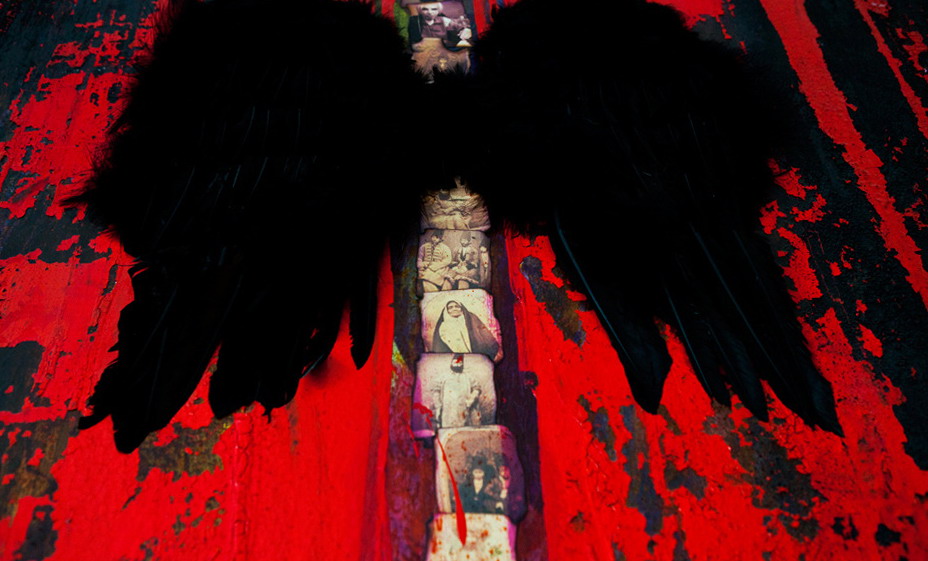 The picture “Fallen Angel” by Petersburg artist, in which despots of XIX-XX centuries are depicted, was presented by the sister. White lamps Tom Dixon must have been hung on both sides symmetrically, but only one has been hung yet: it appeared that the other lamp required strengthening of the beam or grooving in the ceiling. Monolithic table with the length 2.5 m and the weight 130 kg and the sofa B&B appeared not very mobile structures. The porters had quite a job with them. 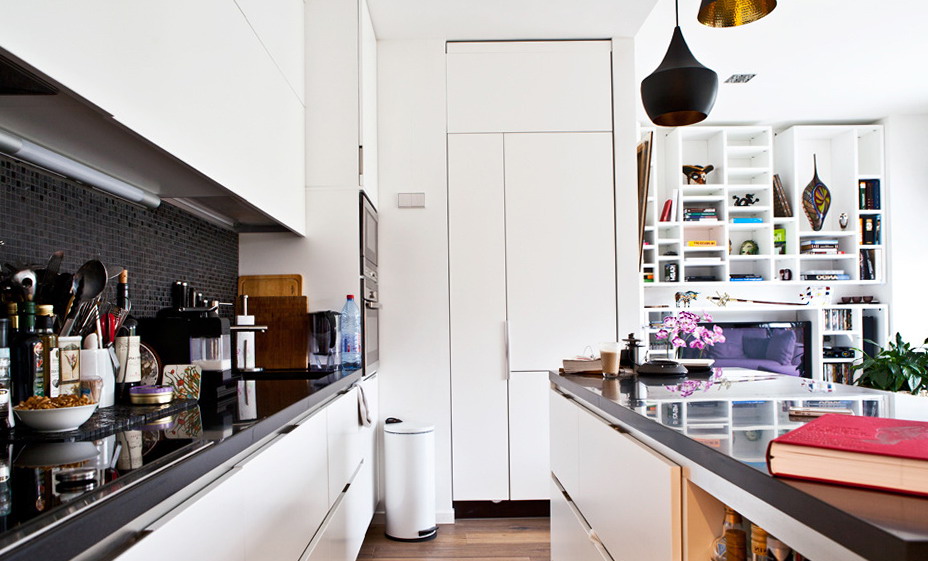 The kitchen is Giulia Novars.

Initially an ordinary table was planned instead of the kitchen island, but this solution turned out to be much more functional: a wine chiller was inbuilt here, and a huge glassware collection, which Larisa carried from the previous apartment, got into a place. The lamps are Tom Dixon, the stool is BoConcept, the chairs are Antonella. A picture of acidic colours by Schedrin was presented by Larisa’s parents on a housewarming party. 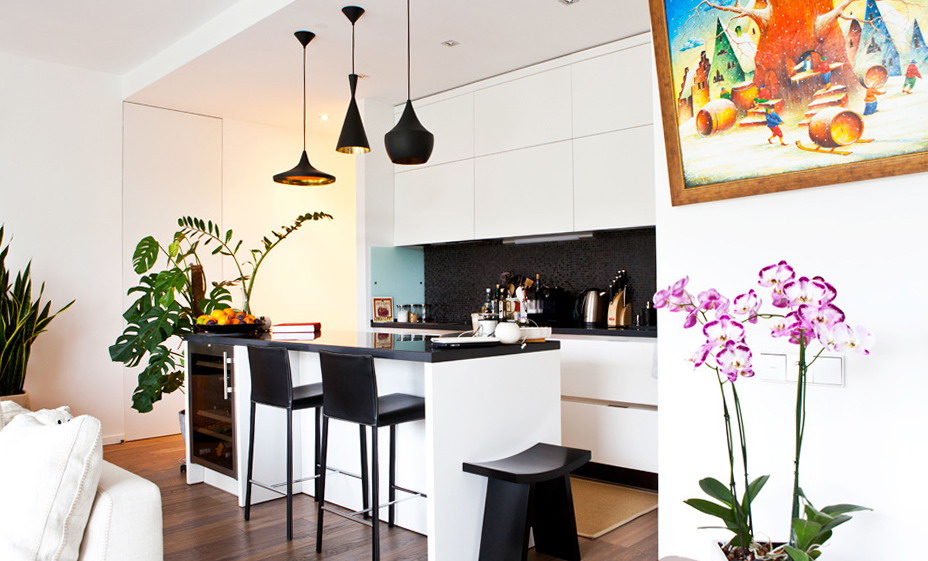 The owners took the idea of the stack with the weight 800 kg from the Italians and ordered it from Russian manufacturers from the similar scratch. The murano vase was brought from Venice and masks were painted by the owners themselves. They spent the whole day with a craftsman who didn’t speak English. The mask of Casanova appeared the most expensive – Andrey chose the leaf gold, silver, and copper for its painting. 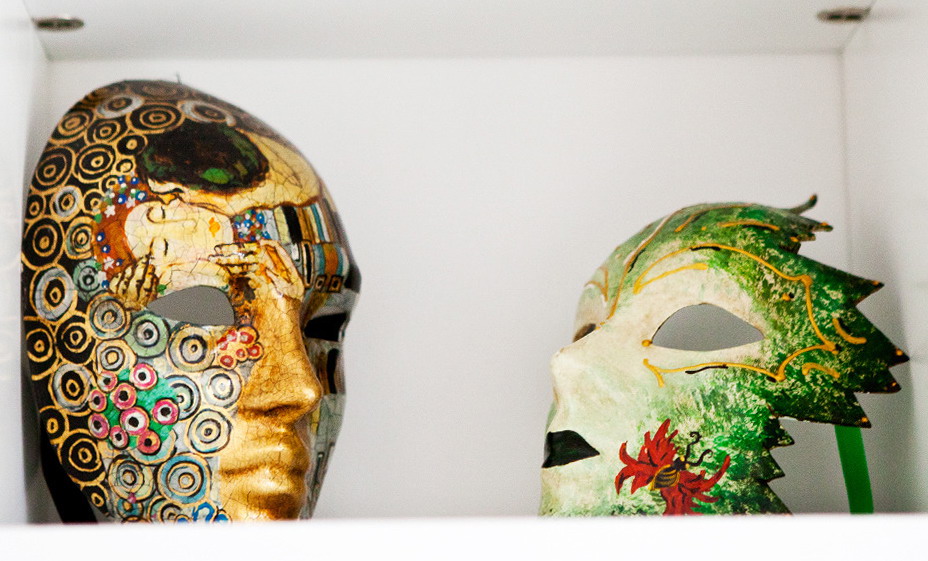 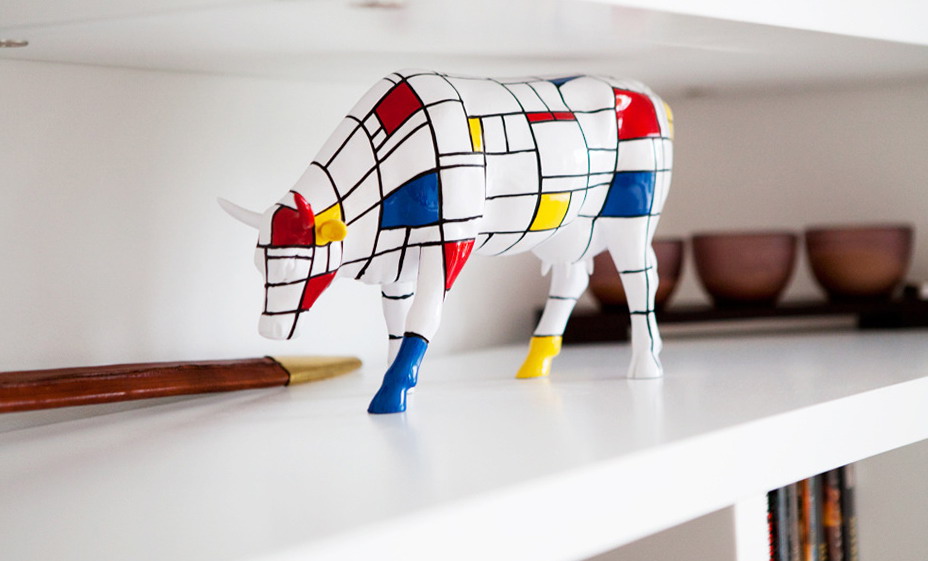 The Mondrian Cow was brought by the owners from Holland, the bull was brought from Seville. A sharp sword, a copy of Hernan Cortes’ tool, is a present for Andrey from Toledo. 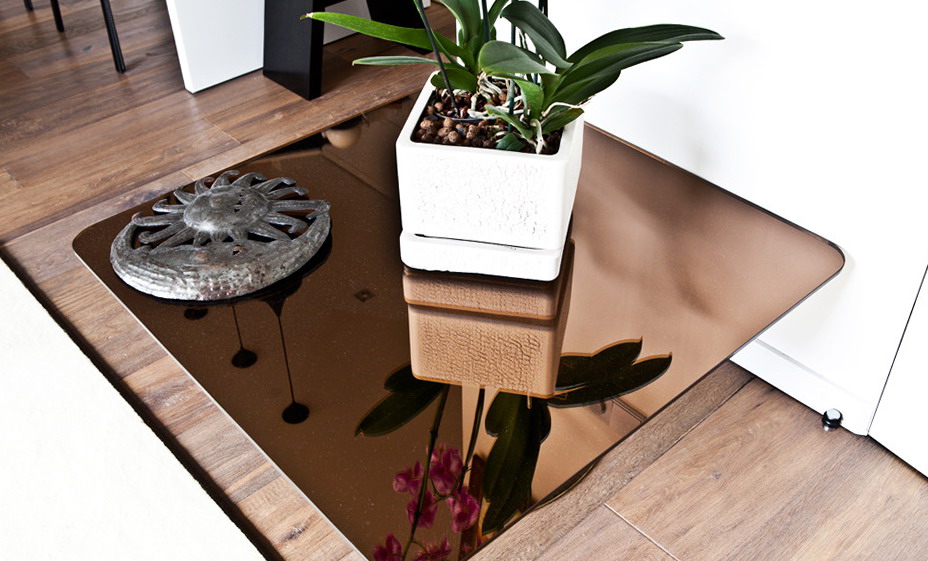 Lamps Tom Dixon were ordered in the company, that’s why the owners had to order a mirror surface table of a copper colour, which blended in with the interior, to get a minimal sum of delivery. 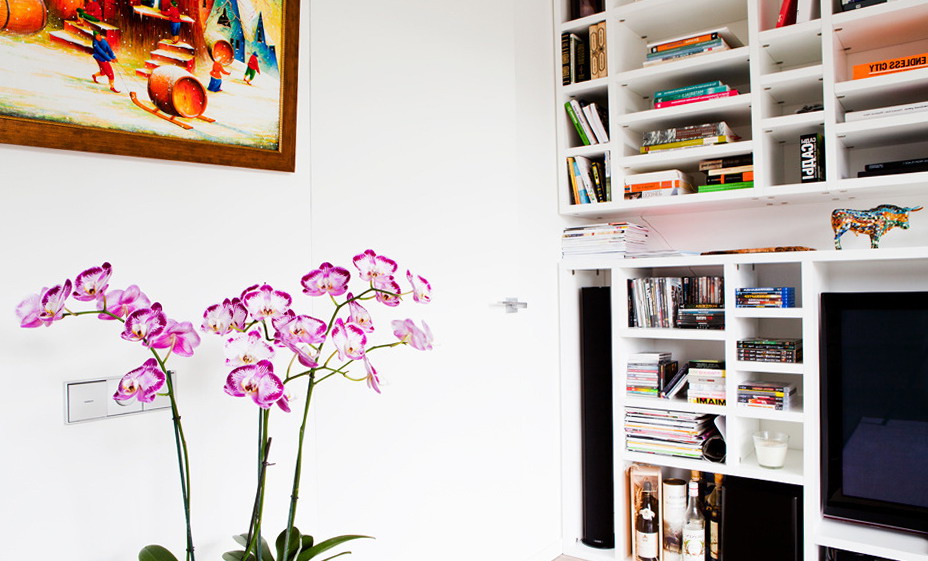 The doors which match the walls and with the height to the ceiling were made to order through the company Union — the owners didn’t want door frames, and in addition the ceiling became higher visually. 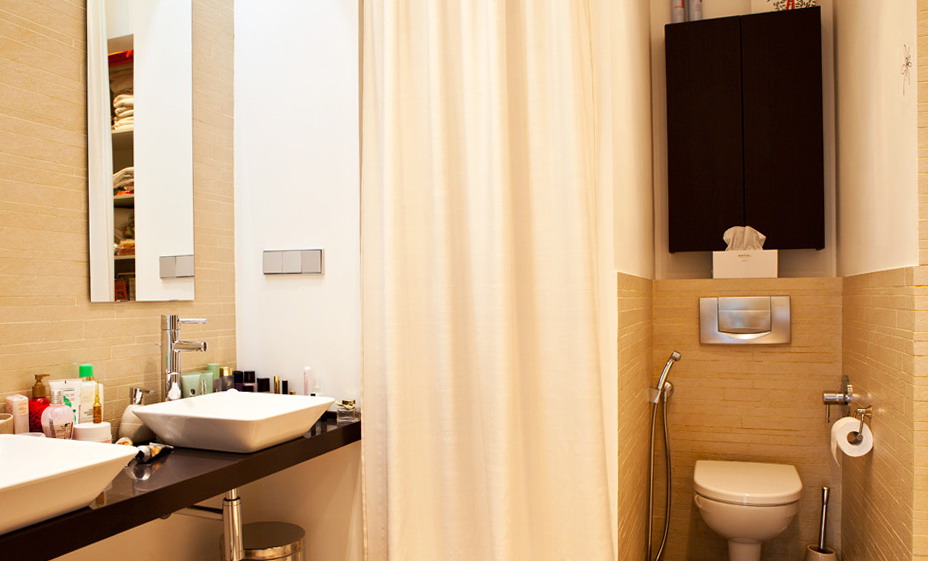 There is a bathroom, where the wardrobe room is also located, from the right at the entrance to the bedroom.

Two sinks installed in the bathroom appeared not very functional in practice. Everything is not so cinematic in the real world: the owners use them not so often at one time. 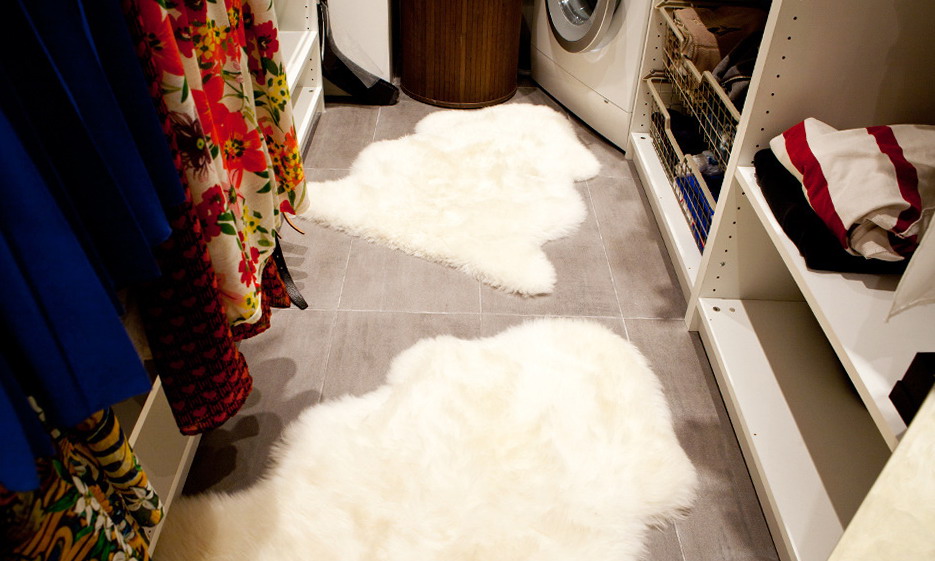 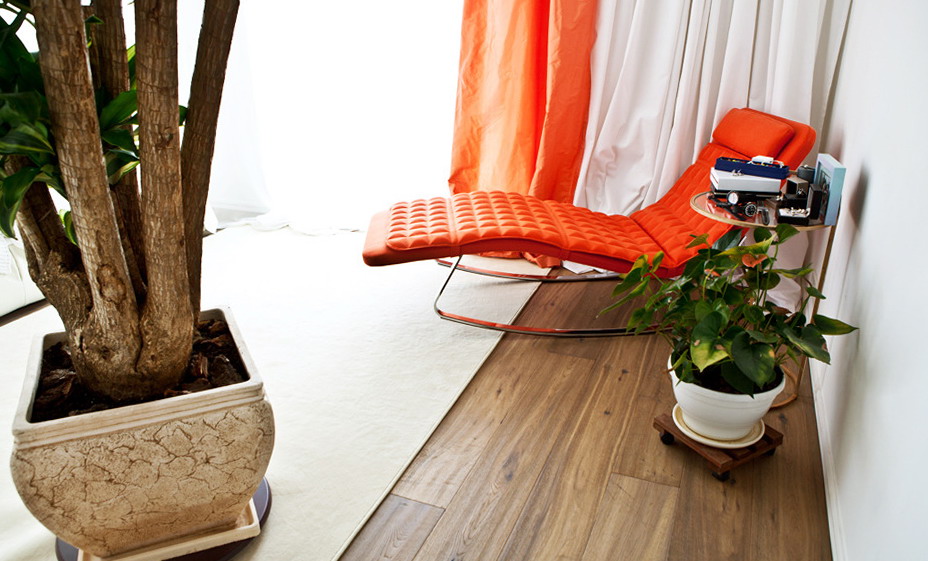 The banquette is B&B. 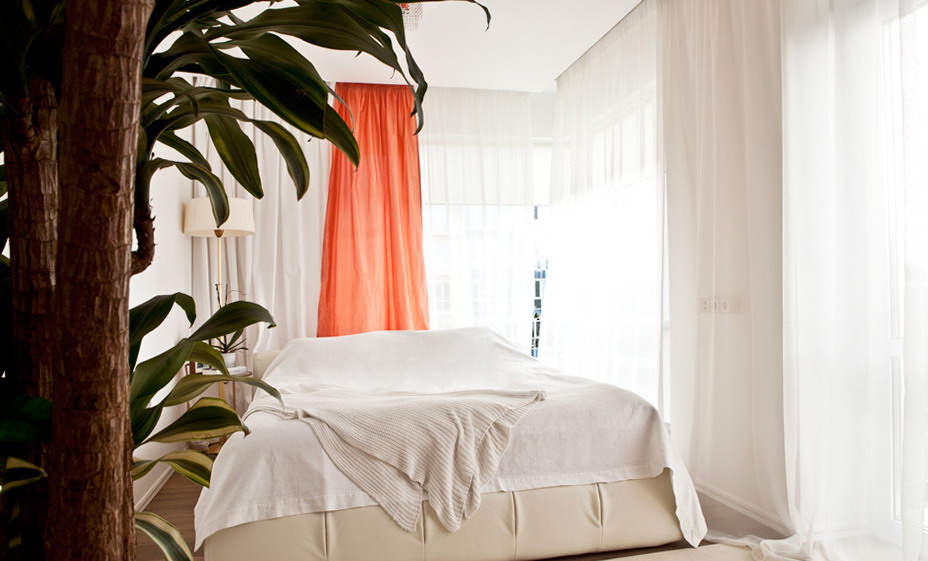 The owners wanted to lay a carpet from cashmere and wool in the bedroom initially, but in the end there was little room for it and it was separated into some parts – the other part lies in the living-room. A leather bed is B&B, the bedcover is Zara Home, the plaid is IKEA. Curtains and a floor lamp are works by Larisa’s sister.