An attic with wooden beams and sloping roof furnished as a photo- and music studio. 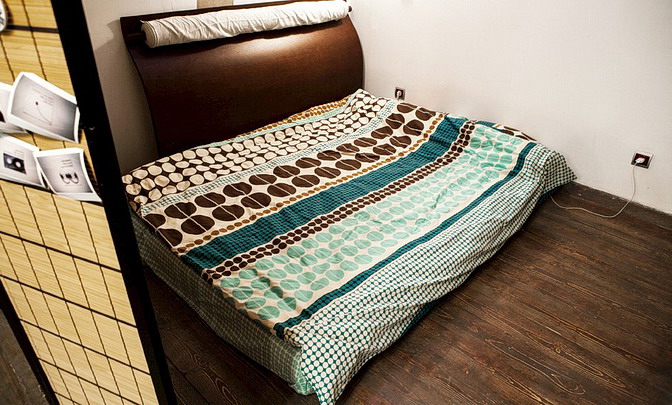 The whole floor of cosy attics was made up in this house located in the north of Moscow in the late 90s. They all belong to the state which decided to give them to artists for their art studios.

It turns out that habitants of the attic live as if on the platform from a fairy tale about Harry Potter which apparently does not exist – at least many habitants of the house even do not know about these attics according to owners’ words.

There is no central heating in the attic, that’s why it is necessary to turn on heaters at full capacity in winter. But one can get on the roof through a small window, where from there is a perfect city view.

A spacious studio fell to Lena from her brother unexpectedly, but at the most inappropriate moment: the hostess was just working at her diploma, and the dwelling required a repair. Denis, who offered to help, appeared unexpectedly. In his turn he had no place to live in. They began to date in some months of repair works and now live together.

The apartment was fully fitted out for life: there was a minimum of furniture already here, and the owners decided to add a home atmosphere with the help of photos, spoils from trips, and other interesting details and interior items.

The couple has been living in the studio for two years already, initially they planned to work, create, and also have parties here. But they succeed almost in nothing: parties irritate neighbours, and the space which is likely to prepossess to a creative work is more suitable for rest in practice. Thus, a stretched background for a private photo studio is much more often used as a projector screen. A sofa, a kitchen, and a mirror, which caught the fancy of the owners, were here for the moment of their move. There is a bedroom and a wardrobe room behind the curtain wall. The walls which were repaired by Denis at the very beginning returned to a state of nature due to leaks in the roof.

The owners bought three heaters for the case of cold weather. Though, incidents happen: water and other utilities function due to electricity and power cuts occur from time to time. One can get on the roof through the window. Lena often arranges shooting here in good weather. 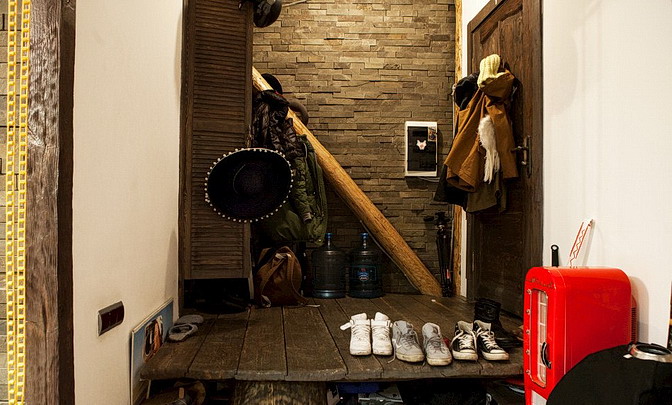 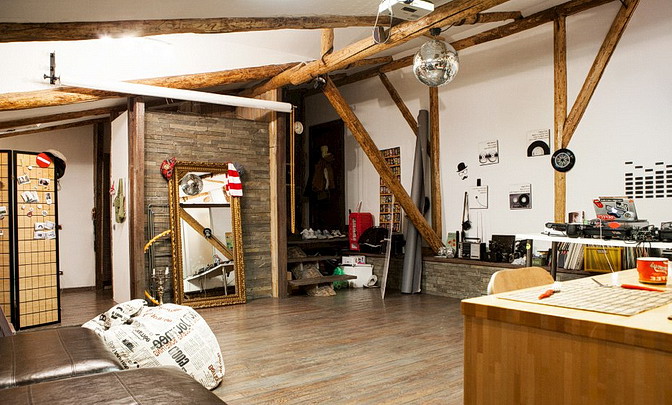 Denis organized his working place after numerous requests of Lena who flied to the USA to study at that moment. When she returned, Denis gladdened her by mounting a DJ section and hanging a disco ball. 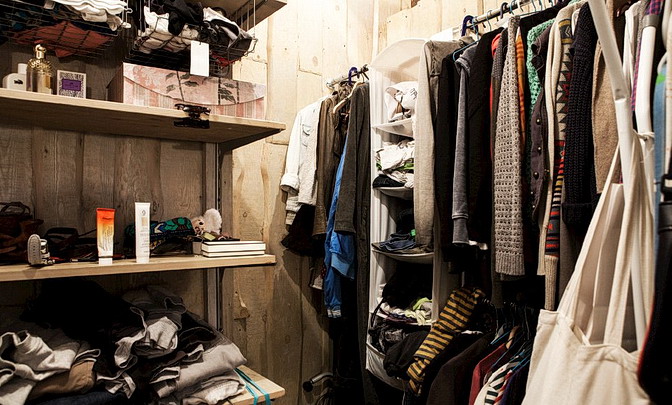 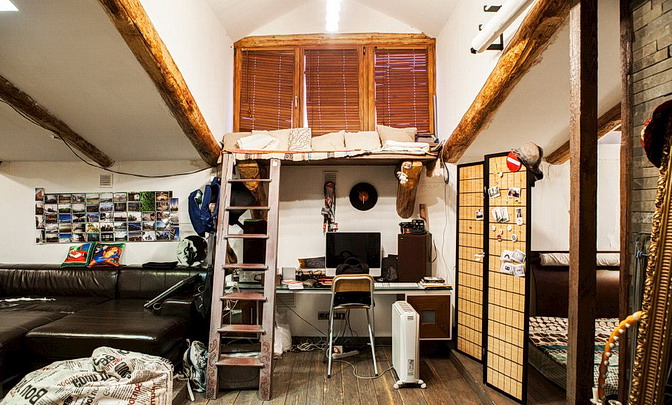 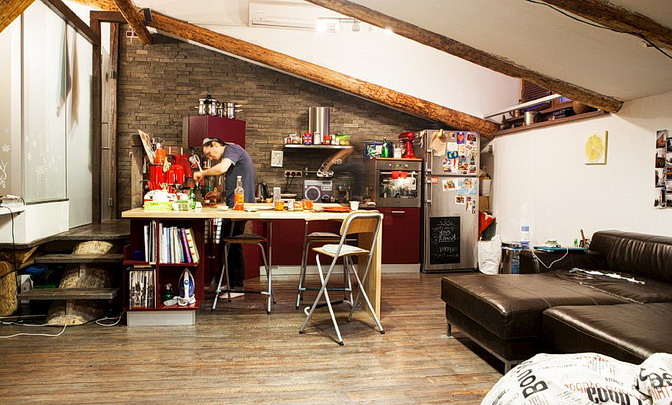 One of incentives to moving was the need for a kitchen, where Lena could practice cooking experiments. The hostess likes to cook very much, she cooks biscuits, jam, and other sweeties for sale from time to time, and takes part in fairs as well. Lena and Denis are freelancers, but they keep to their own schedule and regime. For instance, they have an inviolate tradition: they gather for dinner at home at four every day. 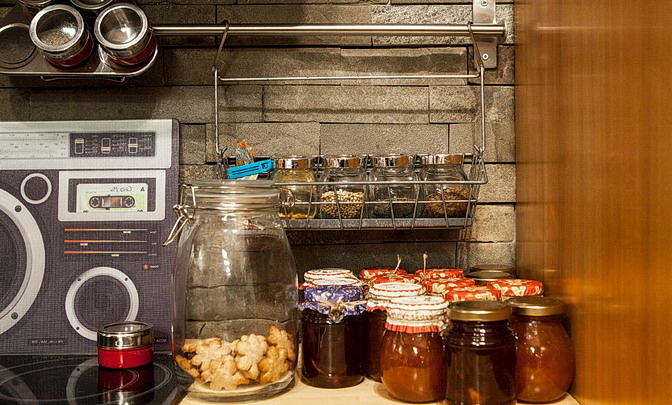 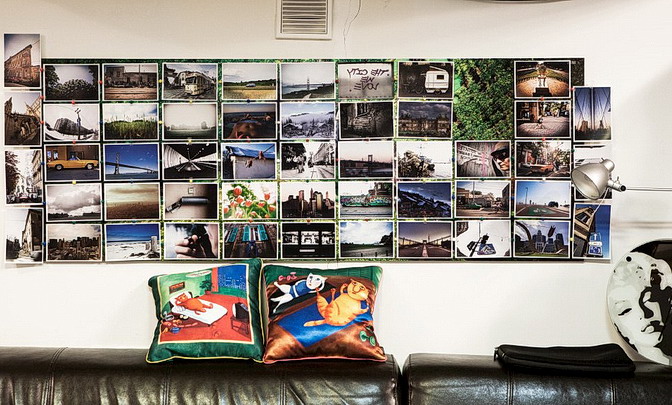 One of bright details in the apartment is the wall with photos, which continue their expansion with every new travel. 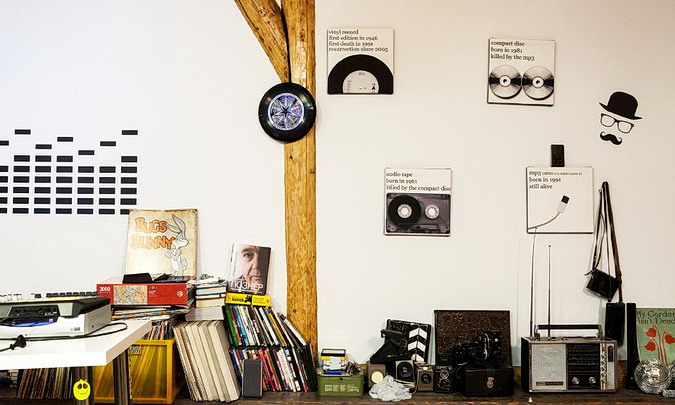 The opposite wall is dedicated to the main hobby of Denis – music. A series of posters dedicated to the history of music media was bought in Brussels. A casus happened at the customs there: the works were packed into boxes for pizza, and this aroused customs officer’s suspicion, who carried out a detailed examination in the end. Puzzle with cans for pop was bought by Lena in an ordinary book shop. So she found an occupation for Dennis and for herself for the whole year. 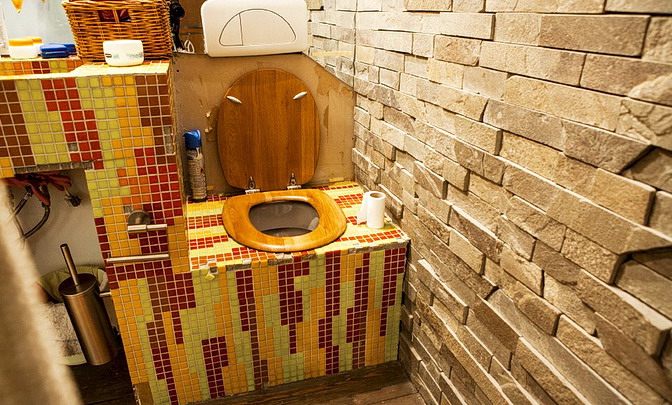 There is a bathroom tiled with red-yellow mosaic in a glass box on a raised platform.