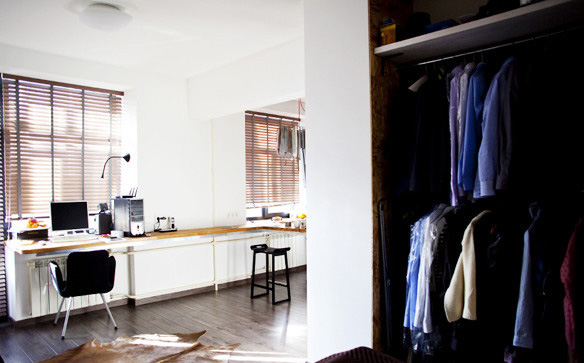 Elena Nikitina was keen to use area to the maximum leaving the space opened in her own small apartment. A natural oak tabletop at full length of the room was made for a single-room studio with patterned walls and wallpaper from Fornasetti collection, and the opposite mirror wall expanded the space visually.

Lena lived with her parents before the purchase of her own housing a year and a half ago. She searched her apartment in an old house in the north of Moscow, and having viewed two variants she chose Malaya Botanicheskaya street. A small apartment attracted the hostess at once by its large windows, high ceilings, and the place itself: Botanical garden spreaded out within walking distance.

The apartment was a typical example of the style of the 90s before the repair lasting for a half year: burgundy wallpaper, pink drop ceilings, brown shiny tile in the bathroom. However, all this luxury was compensated by a studio layout. What concerns capital changes Lena made only one – she moved the niche for a wardrobe from the wall in the bathroom to the opposite one. The hostess is engaged in interiors herself, that’s why she planned the space absolutely by herself, using all that she likes in the apartment: chafings, patterns, combination of expensive and low-budget elements in the finishing and details. 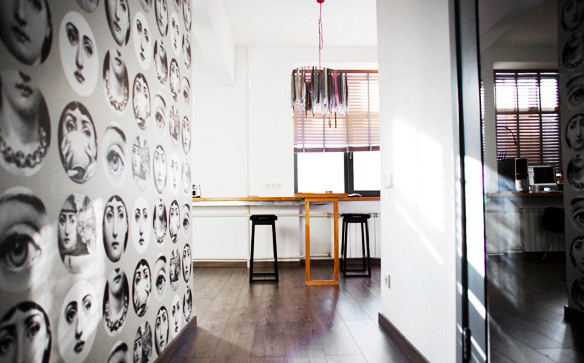 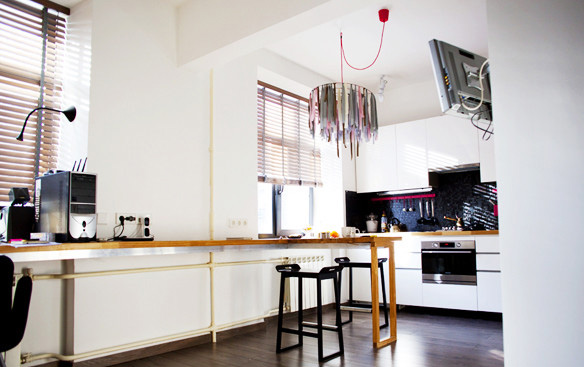 The ceiling lamp with ribbons was brought by her friend from Poland. 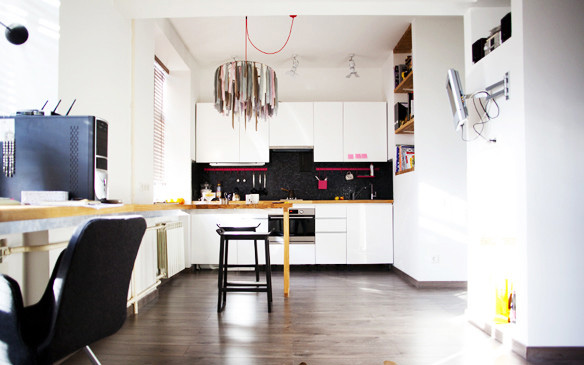 A white ready-built kitchen was made to order in Russia. The main requirement to it was plain surfaces. 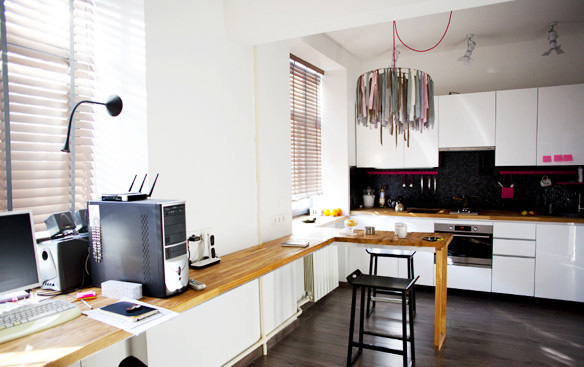 A natural oak tabletop at full length of the wall was made from Lena’s scratch. 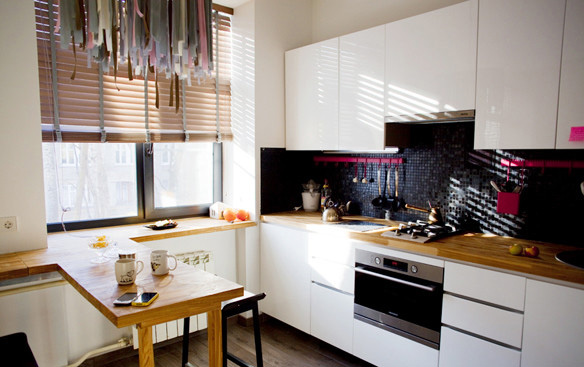 The hostess changed white plastic windows into dark ones and she decided to use the blinds giving pleasant soft light instead of curtains which did not fit in the interior. 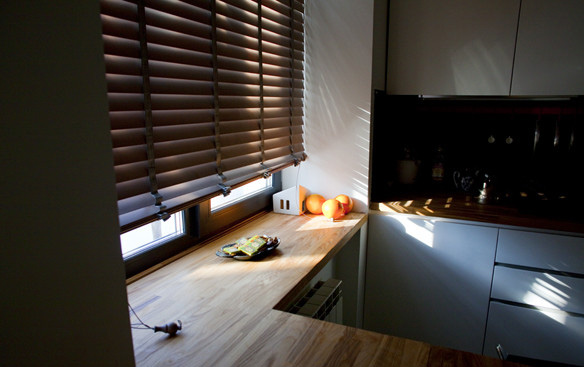 Dark mosaic from which the splash back is laid in the kitchen and the floor in the bathroom, and the tile in the entrance hall remained after the repair of customers’ apartment. 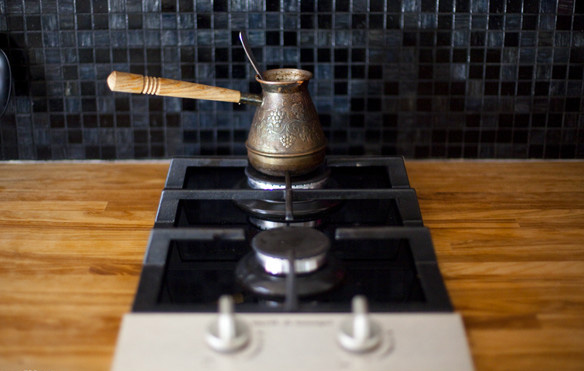 Lena rarely cooks at home, that is why the cookstove with two burners is the optimum alternative. 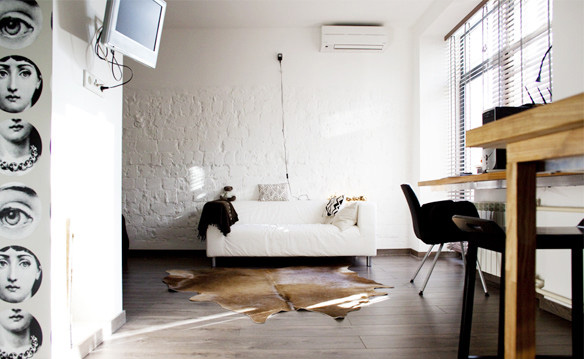 Almost all furniture in the apartment and the carpet were bought in Ikea.
A patterned brick wall was found out under layers of old wallpaper and plaster, and there was nothing for it but to be bleached-out. 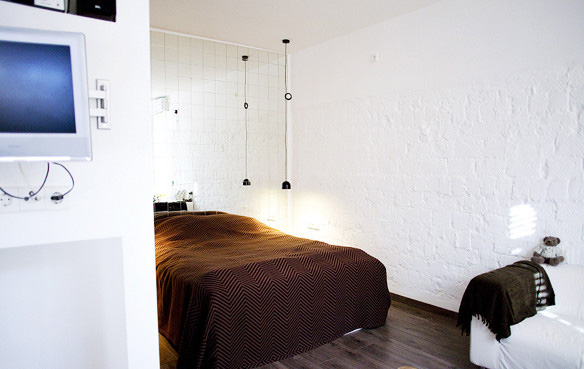 The blanket is Zara Home. 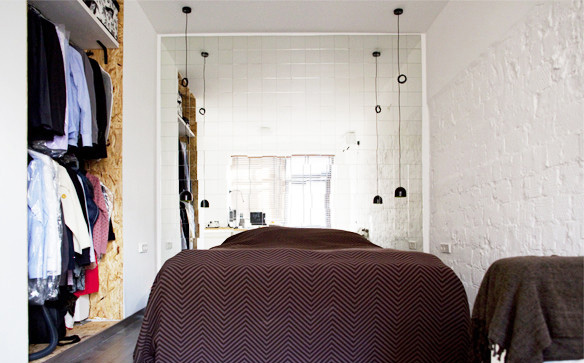 Initially Lena wanted to tile the wall with metal rectangular tiles, but in the end she decided upon a low-budget variant, covering it with mirrors from Ikea.  The lamps are Flos. 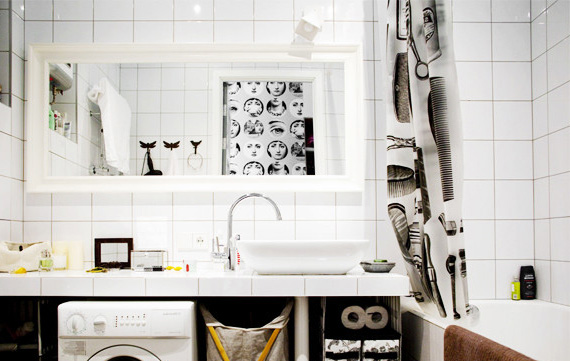 White tile for a bathroom was bought at the market. 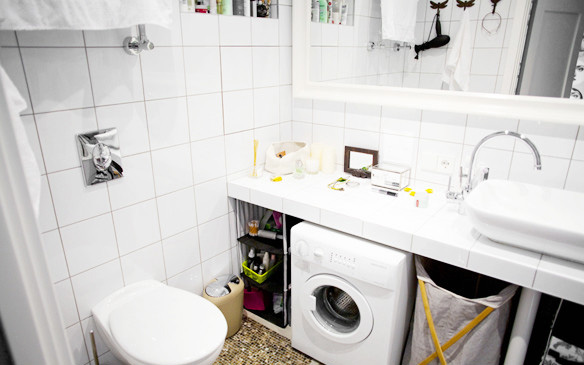 During the repair mosaic for the floor in the bathroom ran short, that’s why it was partially concreted. Lena dreamed of a large tabletop in her bathroom for long. The leg was outside plans, but it was required for structural stability. 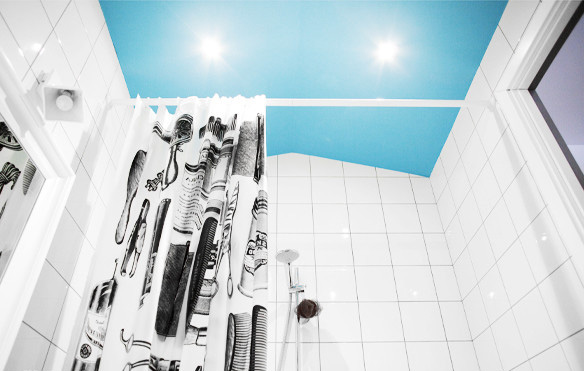 Yet Lena wanted to add one bright detail to her monochrome interior – nonstandard ceiling like a blue coloured house roof. 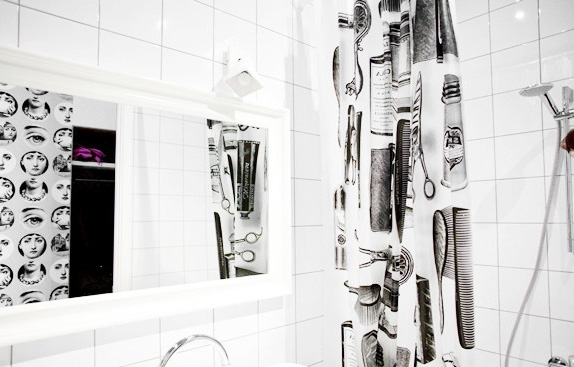 Curtains with French graphics were chosen because they match wallpaper in the entrance hall in style.