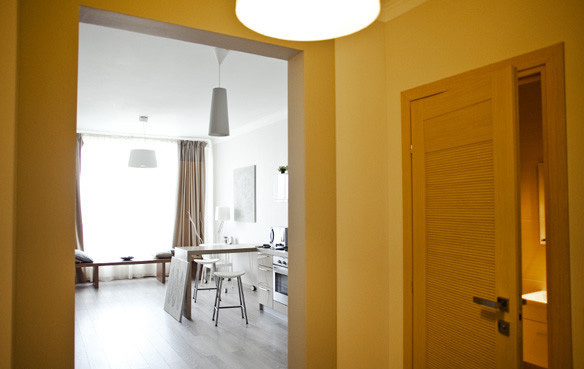 Getting tired of stylistic variety the hostess decided to create the interior in a soft colour grade and minimalist style in her two-room studio. The space was left opened as much as possible – the apartment with furniture made to order is conventionally divided into two zones – the bedroom and a small working zone combined with the living-room and the kitchen.

A two-room apartment in Residential Complex “Aerobus” with the interior of neutral tones and false windows in the bedroom.

Elena bought the apartment in “Aerobus” about three years ago. Her friend, who bought the apartment in the neighboring building, advised her to draw attention to this residential complex. Elena was appealed both by the house itself and by the surroundings and infrastructure. For the most part pleasant and progressive middle aged people live in the complex, many of them communicate with each other, on a special Internet forum of inhabitants as well. Panoramic windows and free layout, which allowed to materialize all ideas, were one more bonus.

Elena is an architect by profession, but getting tired of a variety of styles, details, and colours at work she decided to make her new apartment minimalist as much as possible. A trip to London, where Elena put one of her projects into effect, influenced this much: unfussy, beautiful, and simple spaces inspired her.

All doors in the apartment are of domestic manufacture. 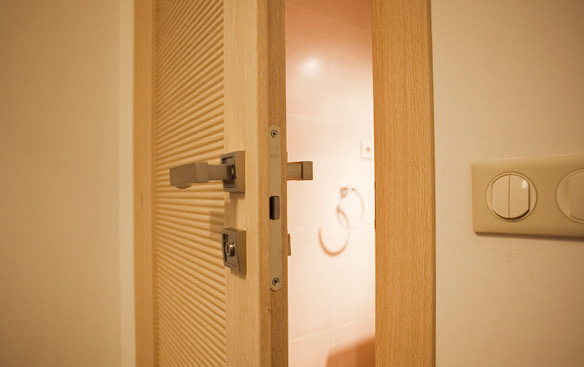 There are two toilet facilities in the apartment, the entrance to one of them is from the bedroom.

Sanitary ware Vitra is installed in the guest toilet facilities. 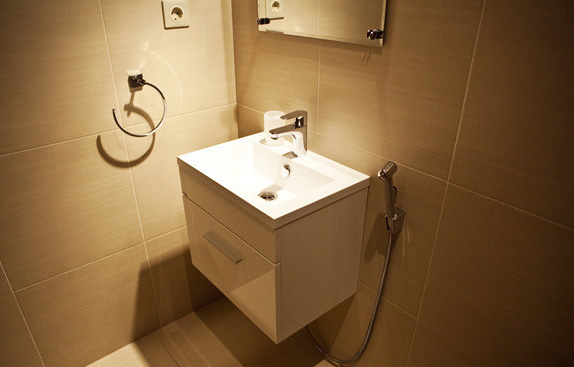 Furniture of Italian brands Elena cooperates with in her work matches Ikea furniture and details. 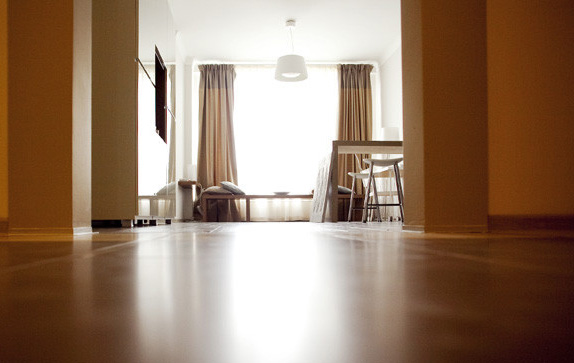 The kitchen with artificial stone tabletop is made to order by the domestic manufacturer. 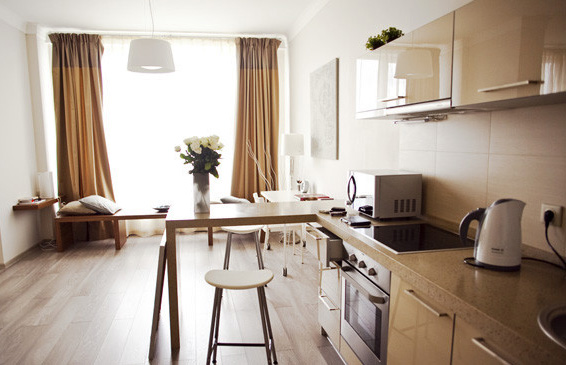 The ceiling lamp is from Ikea 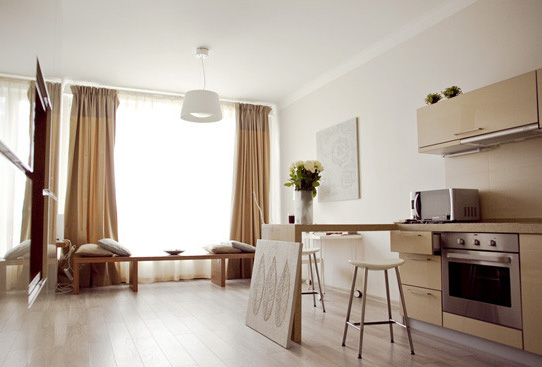 Elena had a fully functional cabinet in her previous apartment and it was a great mistake according to her words: it reminded of the work permanently and set her to work. Therefore Elena made just a small working space in her new apartment. 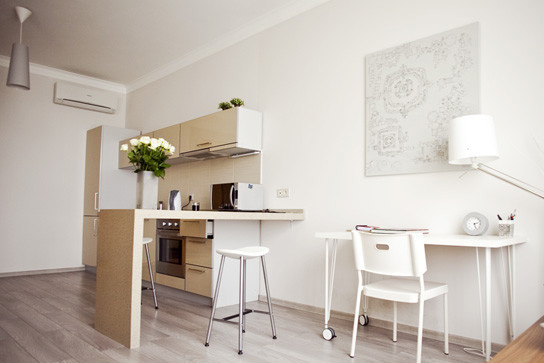 The hostess likes to cook but she rarely had time for this.

Many pictures were moved from Elena’s gallery. Anastasiya Levit’s works hang in the living-room.

Two false windows are made in the wall between the living-room and the bedroom so that there is more daylight in the room. 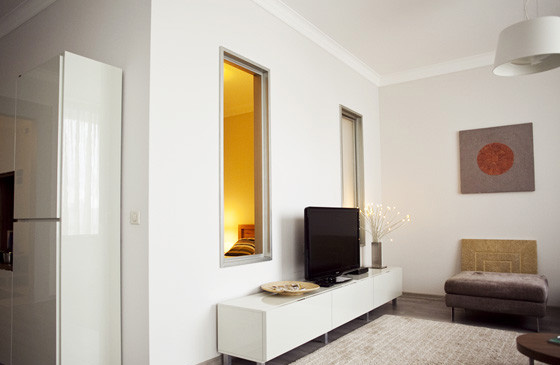 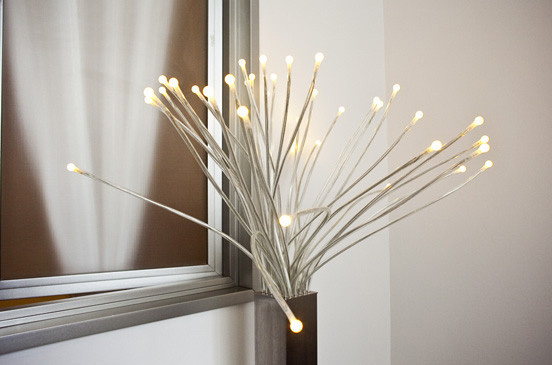 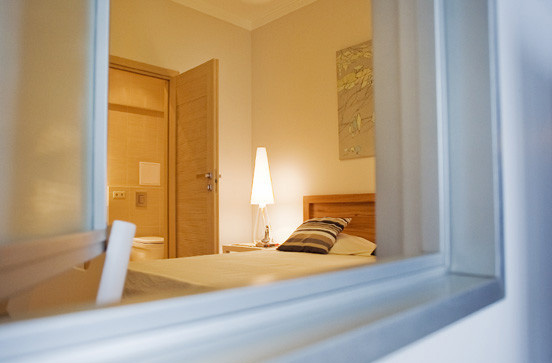 The carpet is from Ikea, the sofa is Bodema. The coffee table is Mercantini. 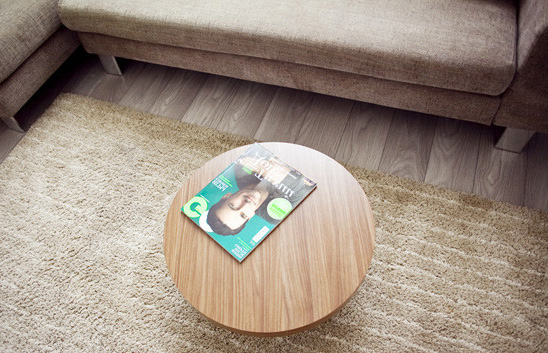 Elena often receives guests, that’s why she wanted to save as much free space as possible. The bench which is moved to the living-room when guests come is Mercantini. The hostess herself thought up and chose fabric for curtains, which were sewn to order by the familiar tailoress. 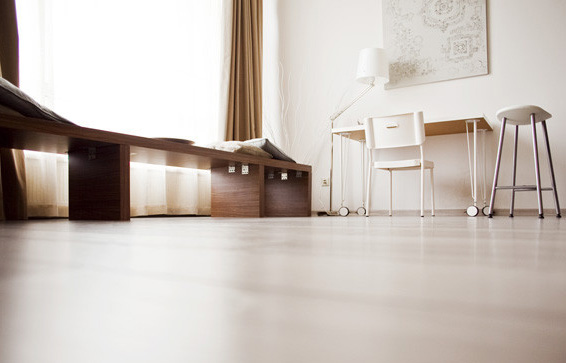 The picture with conventional city plan is the work of her mother I. A. Filimonova, who is also an architect. The table, chairs, and the floor lamp are all Ikea. 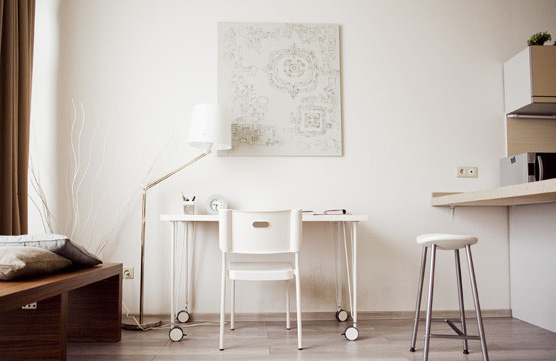 The wardrobe with inbuilt hangers is Mercantini. 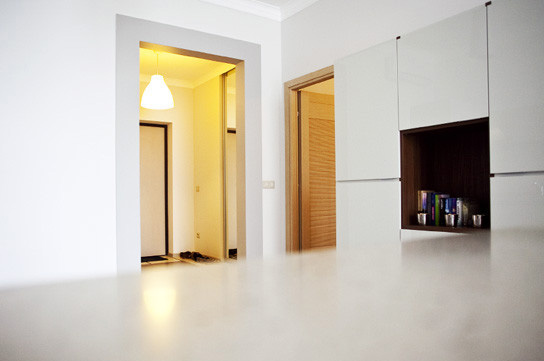 The solid nut bed is of domestic manufacture. There is one more work of Elena’s mother over the bed. 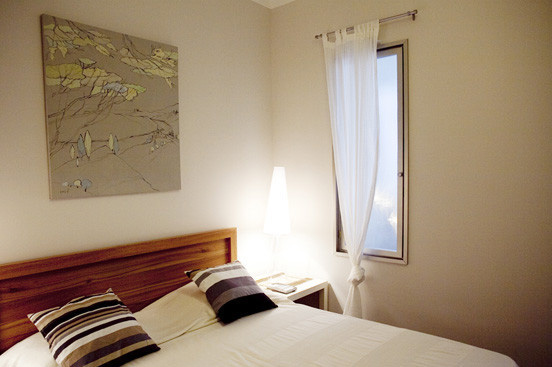 The chest of drawers and the table are all Mercantini. 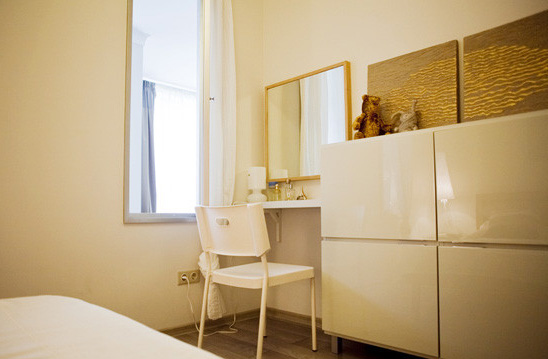 The sanitaryware is Grohe, the bathtub is Duravit. 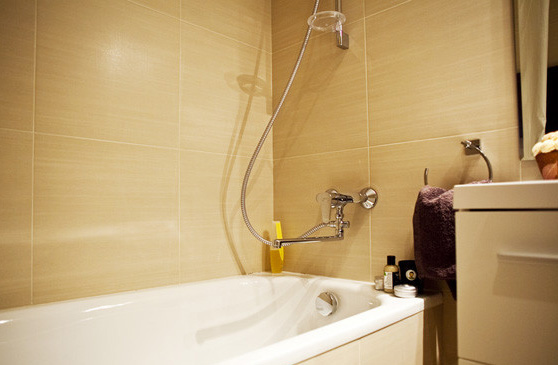 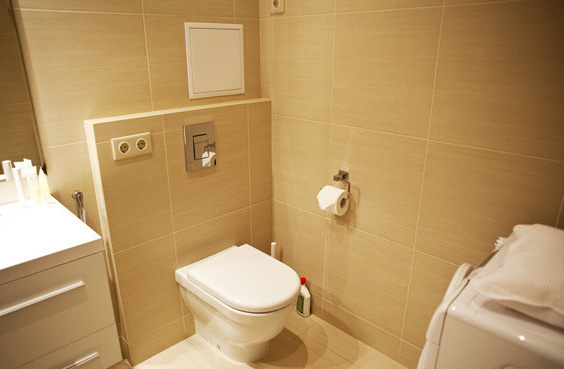