Artem and Dasha have moved into their apartment in a new building in the north-west of Moscow just recently. No sooner had they unpacked the boxes than they have to pack them again, as they are going to study abroad soon. They purchased the apartment in 2010. The repair was begun almost at once, then it was discontinued, and the owners managed to move in only at the end of summer this year.

The apartment on the 14th floor was typical: a standard layout, an ordinary balcony, linoleum on the floor, and peach-coloured walls. It was not necessary to apply to a designer. Creative owners had a clear understanding how they wanted to live and how to achieve this. Both owners were engaged in the project. Artem concerned himself with technical issues, and Dasha dealt with a visual constituent.

The space was reorganized not due to a large-scale relayout, but due to transfer of doors and demolition of parts of walls. A wardrobe appeared opposite the entrance instead of the door to the kitchen. Outerwear is kept here, a boiler and a router were also inbuilt here. There is a door to the bathroom from the right. 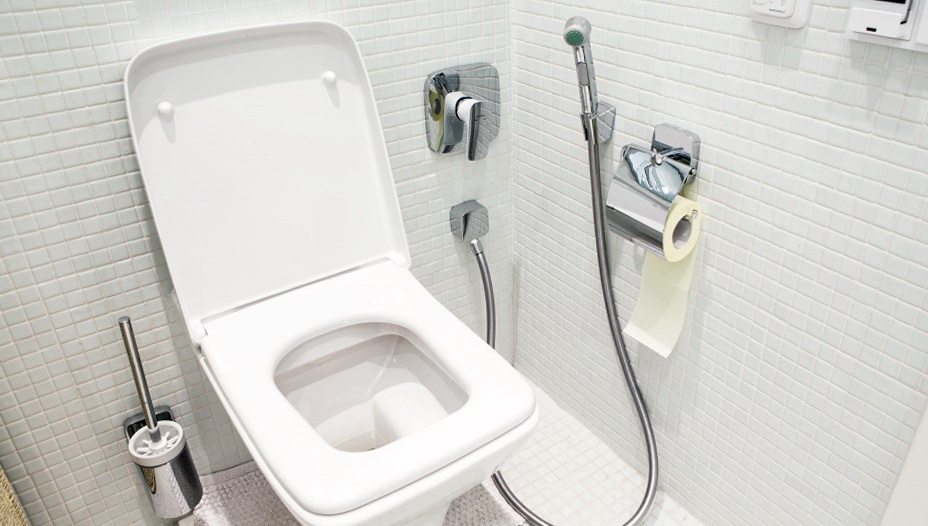 The sanitaryware is Duravit Puravida and Hansgrohe. The tabletop is from artificial stone. The owners wanted to hang the clock BoConcept in the living-room, but it blended in just here and added contrast to a sterile white mosaic bathroom.

There are special devices by the Swedish company ABB near switches in the bathroom and in the kitchen. They allow to charge gadgets and to play music from them. The sound system is inbuilt in the ceiling. There is a wardrobe room behind the curtains.

Initially the mirror in the entrance hall was planned to be entire, but a composite one appeared not only more glamorous but also practical. A board for chalk is from “Lavka” of Artemiy Lebedev. Photographs from Iceland are works by Artem’s uncle, a designer and photographer Viktor Derbenev. White colour was initially selected by the owners as basic – it allows to play with the space due to contrasts and bright accents. Wooden windows along the wall were surprisingly provided for by the typical project. 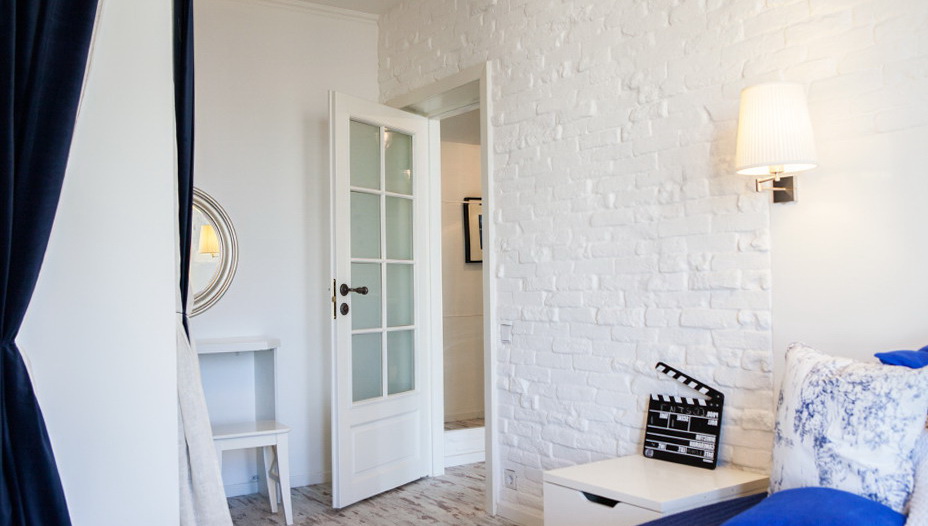 A roll-on console table Ikea is multifunctional: it is a little higher than the bed and one can serve breakfast abed. The owners ordered a complete of stone imitating brickwork without regular elements and this allowed to create natural finish. 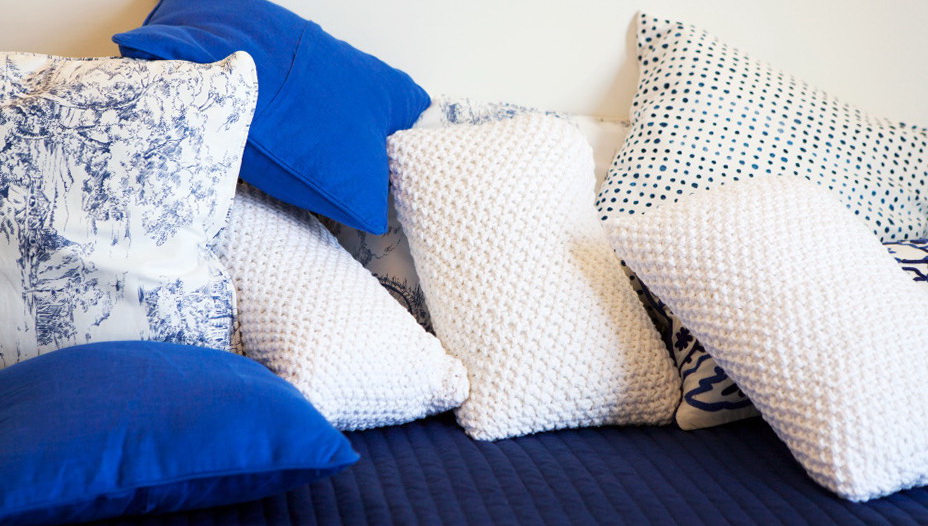 Plaid and pillows are Zara Home. 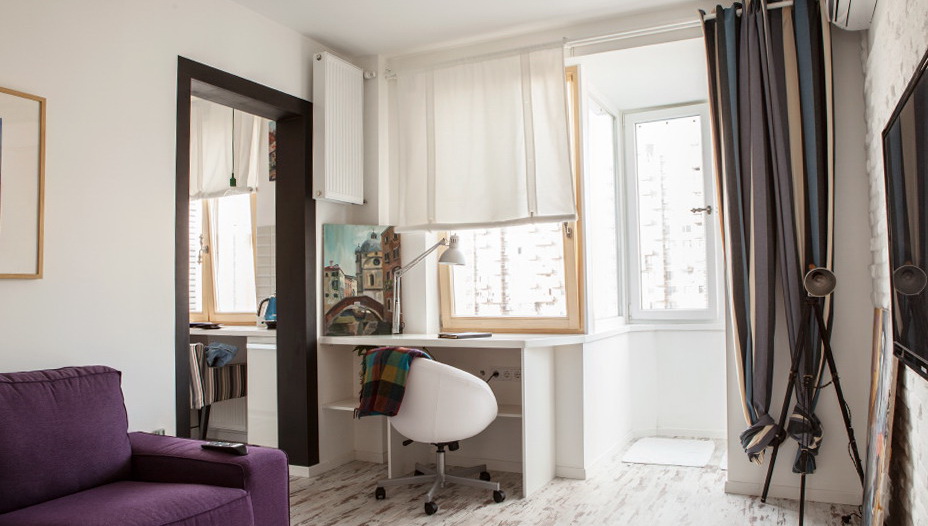 The floor from Portuguese oak is Maestro Сlub Bolero. As the layout was partially changed, it was necessary to strengthen the wall with the help of I-beam – a steel opening which was painted black. The kitchen as well as all wardrobes and fittings were ordered at the factory “MDM-Komplekt”. The sofa is Kika, Ikea’s Austrian rival. Photos with Norwegian landscapes as well as the works in the corridor are by the uncle. 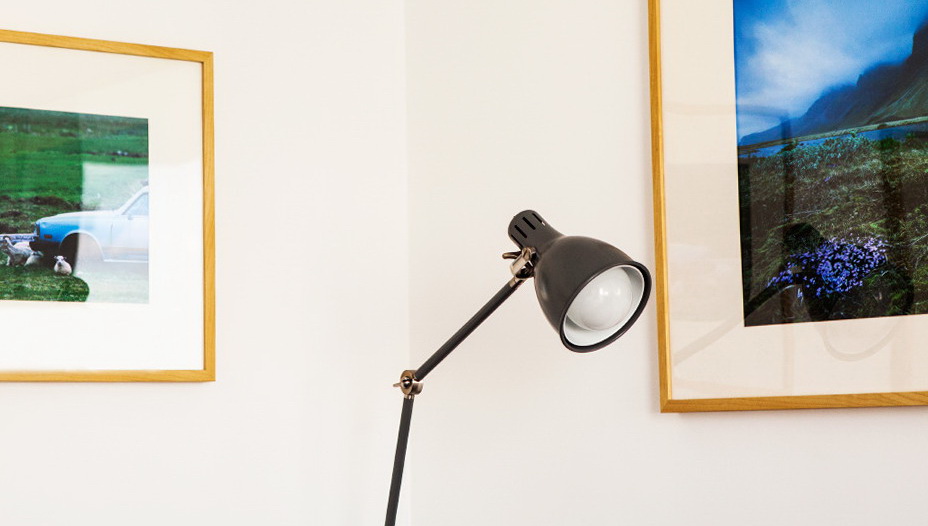 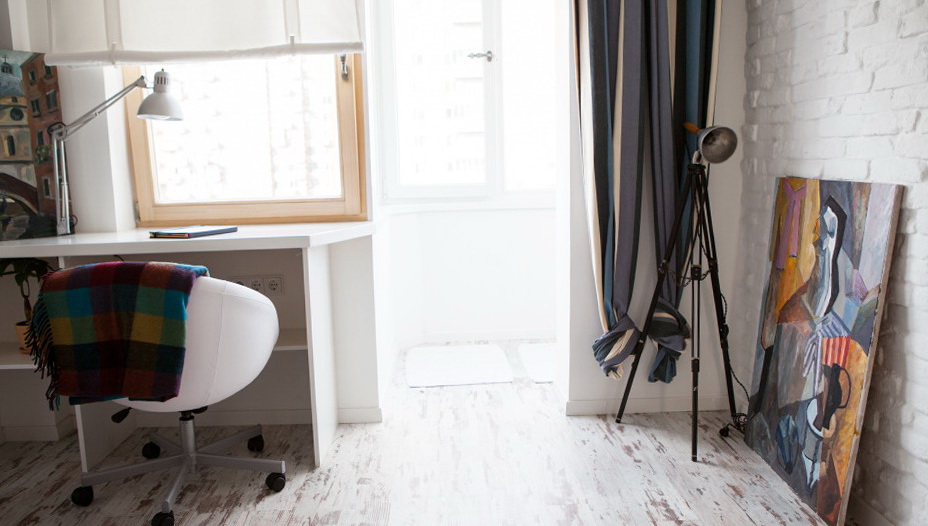 The picture is one of the works by Dasha. The German tripod floor lamp of the 40s was brought from Tel-Aviv.  Artem used to go in for diving and his experience came in handy even during the repair. He remembered that there is a waterproof, solid and low-budget, as compared to stone, yacht wood. All window sills and a working table were made from it. 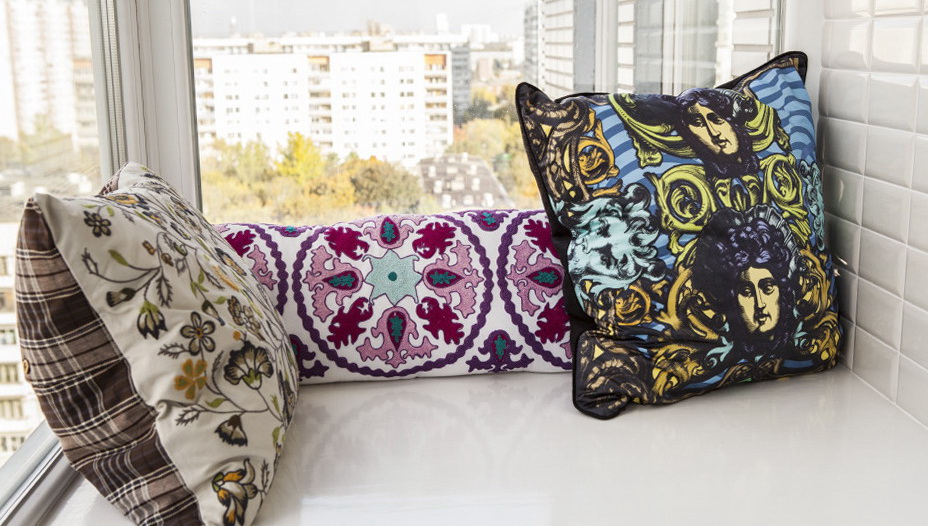 There is a small household section with the washing machine under a nest with pillows on the balcony. 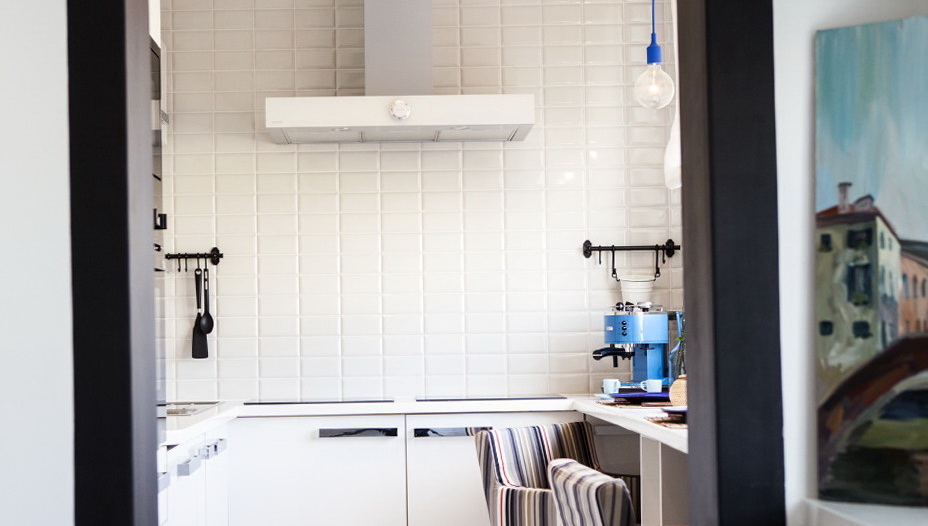 The kitchen was made to order from owners’ scratches at the factory which deals in facades. The kitchen was wider and more spacious before, when it took the place of the wardrobe in the entrance hall. But the owners found the solution and located burners between kitchen and dining zones. The tile which the owners liked in coffee bars Paul and “Coffeemania” appeared not so snow-white, as they expected, nevertheless it blended in with the interior. The armchairs are Ikea. 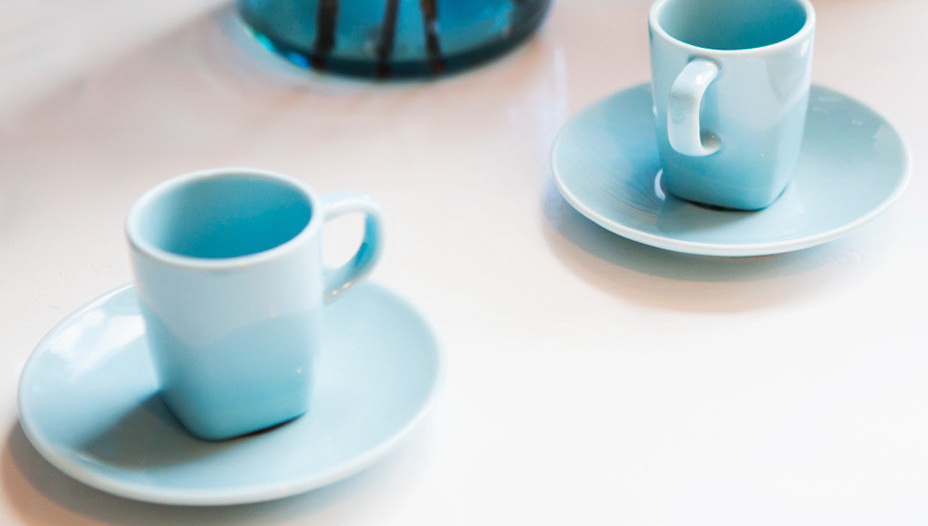 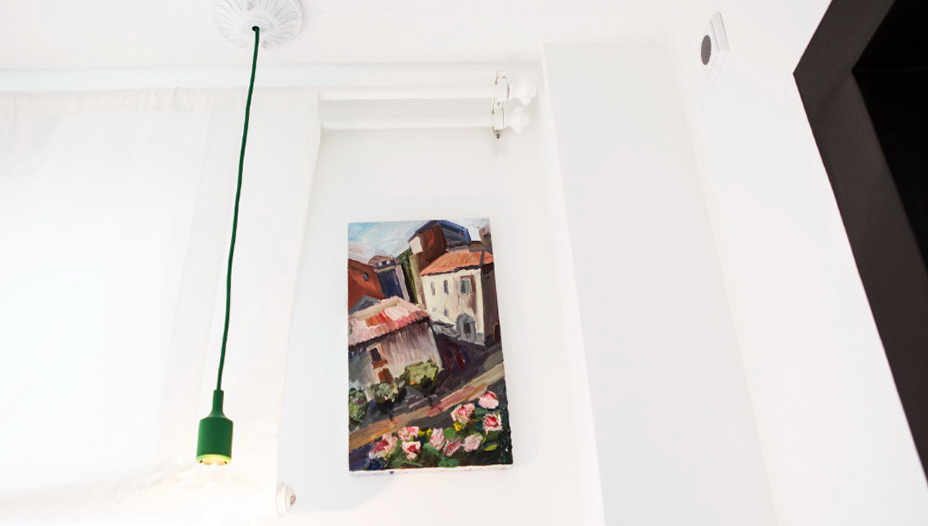 This picture is also the work by Dasha. 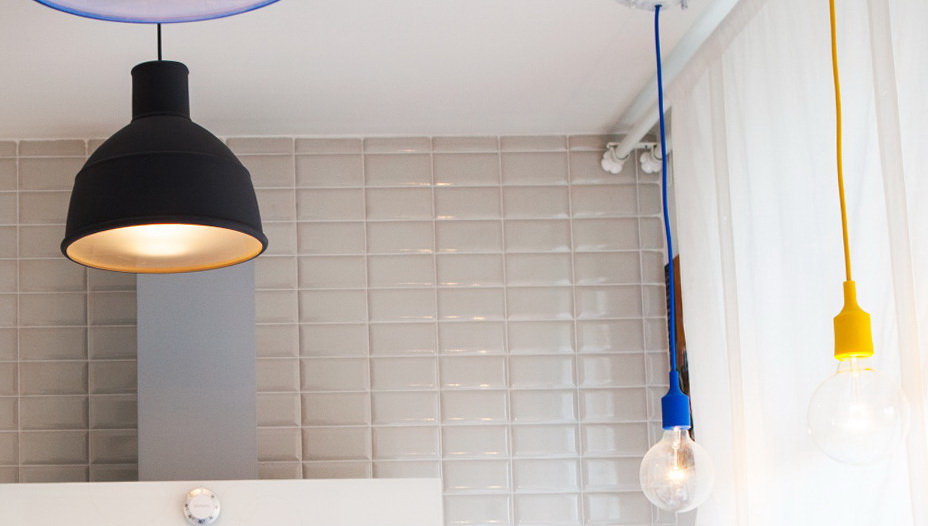 All rubber lamps of the Scandinavian brand Muuto costed 200 euro. They were bought in Milan in High Tech Milano salon.