Lena and Oleg purchased their three-room apartment in a house on Eleny Teligi street in 2009. Incredible as it may seem the apartment attracted the owners by its dire state: firstly it costed cheaper for this reason, and secondly they were not going to live in the repair made by the previous owners. Location of the house was also in favour of the apartment: it is located in a quiet yard in a not densely populated area, there is a kindergarten and a school nearby.

Lena is an architect by training, that is why she thought over the interior by herself. Holding the idea to give a new life to things, part of the furniture was found at jumble markets and was renovated. The other part was bought in Kiev shops. A bed, wardrobes, and a playhouse were ordered from constructors with whom the hostess cooperates. Finally a functional interior comfortable for everyday life was created at low expenses.

The repair was begun from the relayout: the corridor leading from the entrance door to the bedroom was removed. The living-room space was expanded due to it. The passage to the room was transferred, part of the former corridor was turned into a shoe cupboard. The ceiling in the living-room is inclined: it descends to 2.6 m from 2.8 m because of the defect. The resulting niche is used for lighting. 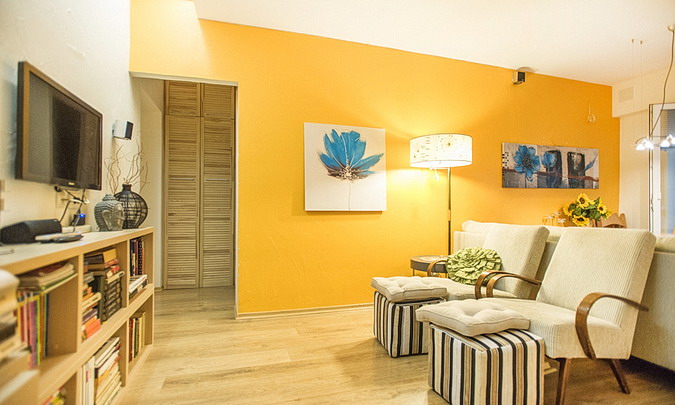 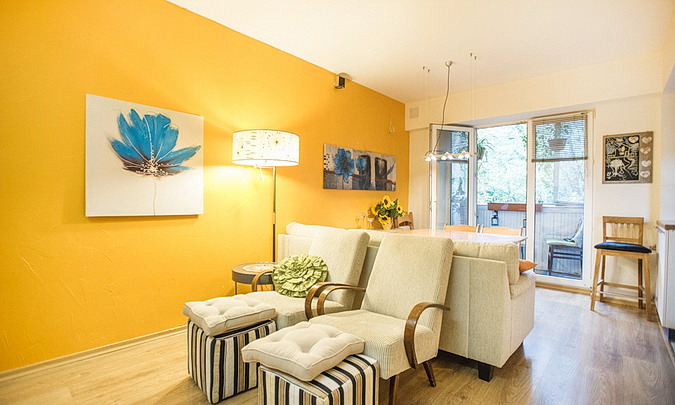 Armchairs for the living-room were found at a jumble market. The upholstery was changed and arm rests were left unchanged: the old varnish with which they are treated is much more qualitative than modern varnish. 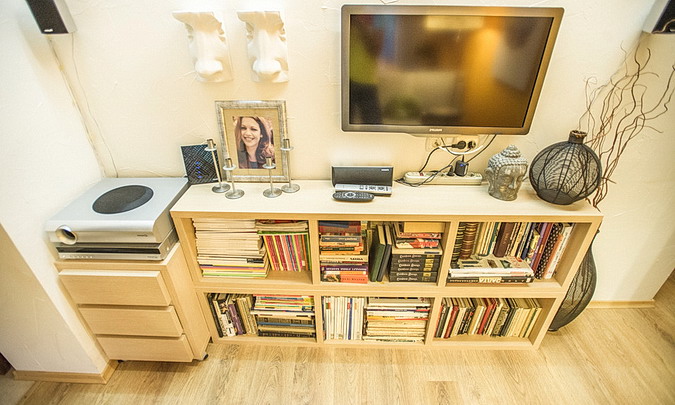 Publications on architecture and magazines on design are in home library. The bookcase is BRW. Gypsum noses are works by students of Donetsk Academy of Architecture and Arts, where Lena’s parents teach. 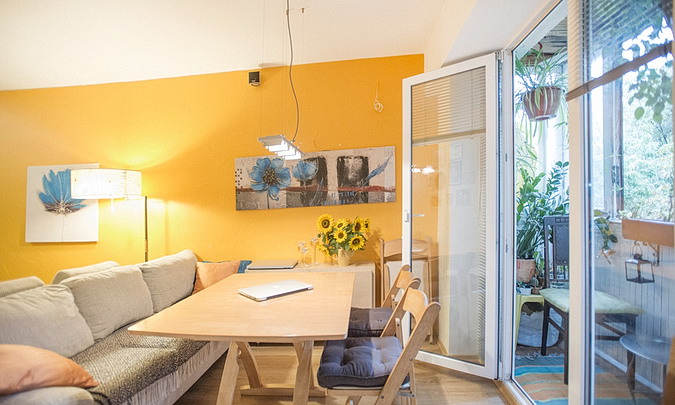 The floor lamp of the 70s had belonged to Oleg’s father before. It was renewed with a laconic picture – thus it blended in with the concept of diptych with blue flowers. 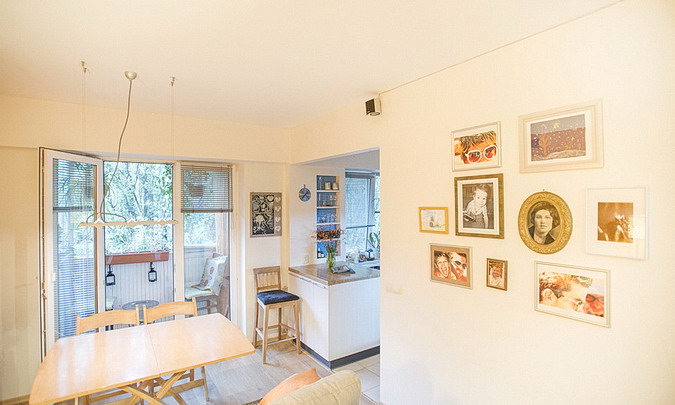 A transformer table is used for tea-drinking by lowering it down to a low height above the floor. The ceiling lamp was bought in “Svetofor”.  A photo of Lena’s grandmother made in the 50s adds the collection of family portraits. The photograph is framed up into a gypsum frame. 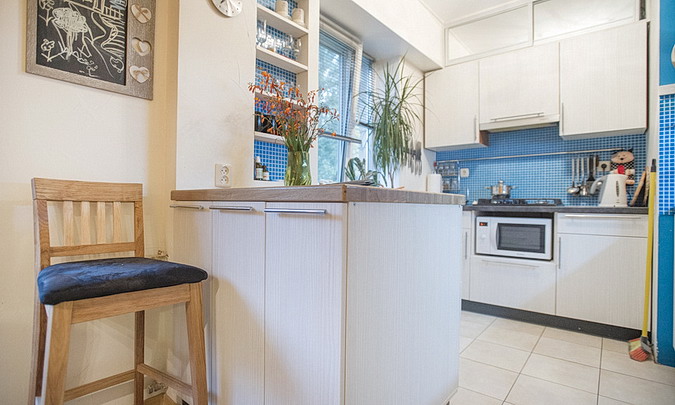 It was decided to use a small area of the kitchen only for cooking. The table on which they cook holds all cookware due to inner cabinets. A bar chair is Jysk. 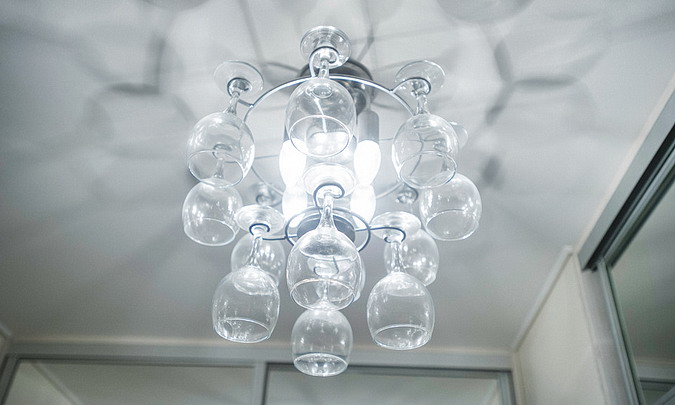 The lamp from wineglasses was found in Leroy Merlin. 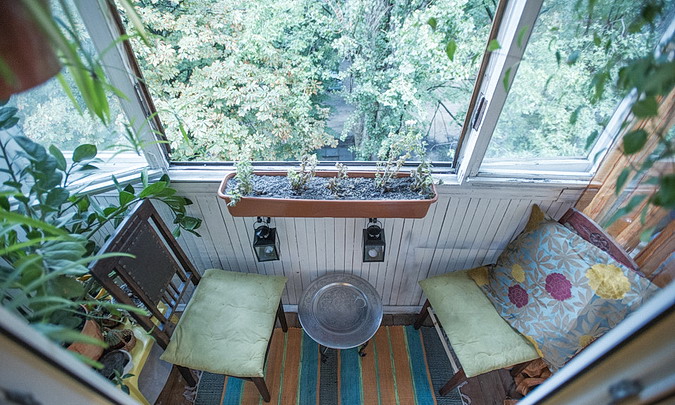 Chairs for the balcony were also bought at a jumble market. Oriental table was bought for a theme party and the owners found application for it thereafter.

Wardrobes in the bedroom were built by constructors with whom Lena works. Shutter doors from plywood were bought in “Epicenter” and were painted white. A toilet table fell from the grandmother. The owners didn’t want to lose consumables, and made a tabletop for a table and a bedside bench from the remains of a kitchen tabletop. 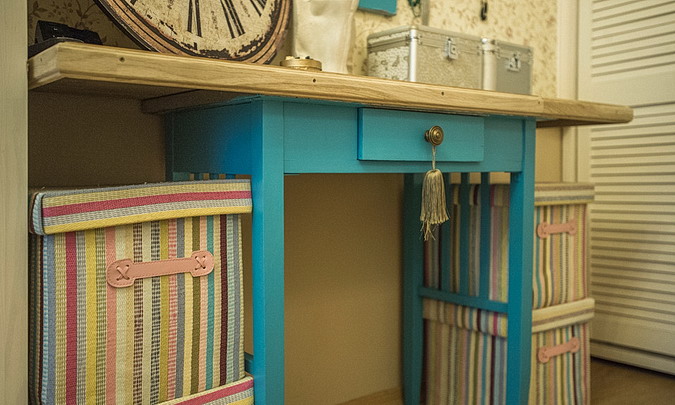 Chests of drawers were renovated by hand. Student works of architects made in wash drawing technique were hung over them. 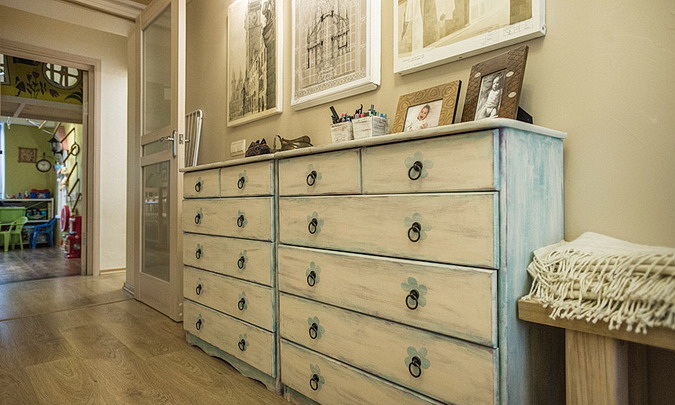 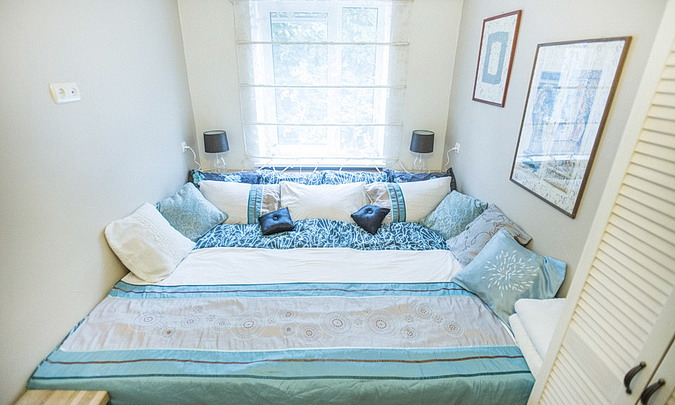 The bed was made by constructors. They laid a matrass on wooden poles. Lena sewed a dust ruffle by herself. The hostess has a large collection of textile and she changes a colour scheme of the bed from time to time. The owners decided to use a tabletop which was laid between the bed and the wall instead of bedside tables. The fabric for Roman shades was bought in Leroy Merlin, and Lena made mechanism for it by herself. 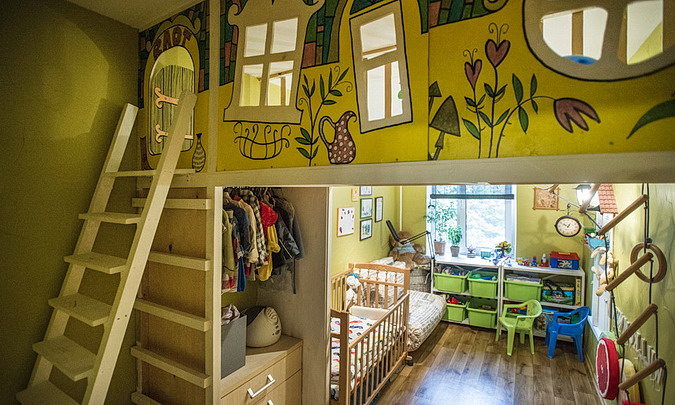 The floor in the children’s room is covered with the linoleum. The idea to build a playhouse under the ceiling appeared spontaneously: constructor who made entresols in the bedroom told that children liked to climb there. Lena decided to make similar construction for their son. The hostess painted the house from outside and Tolik can paint inside by himself. 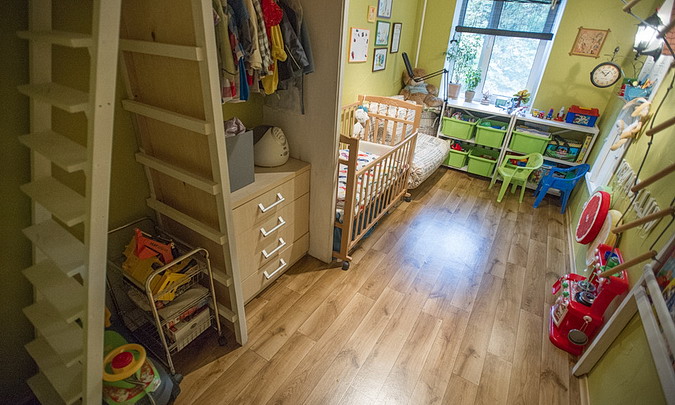 A wardrobe and a book shelf were located under the playhouse in order to use the space functionally. Materials remaining from the playhouse were used for a sliding table.  Letters-hangers which are used both as intended and for development games were found in Jysk. 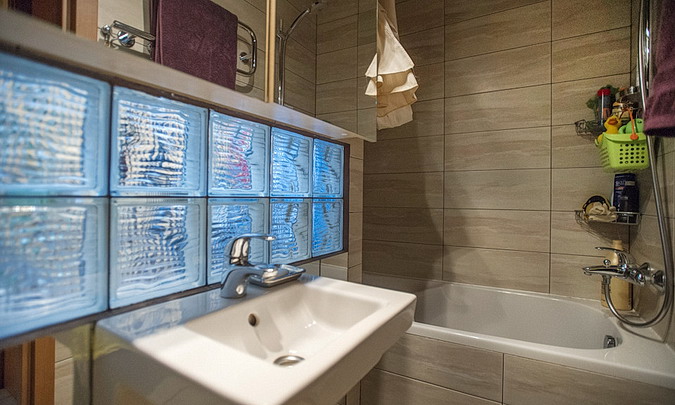 The bathroom was visually widened due to mirror wardrobes. There is much light here in the daytime due to glass blocks. 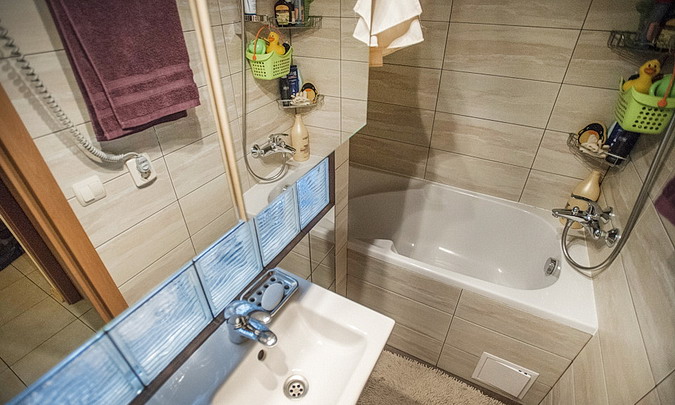 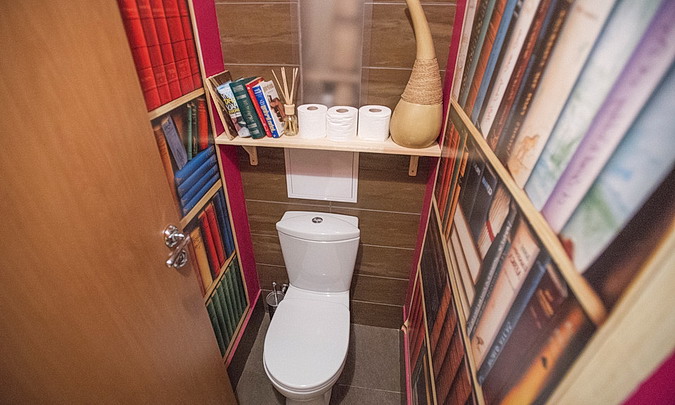 The wallpaper in the form of bookshelves for the toilet was found in “Epicenter”.