Sergey and Marina bought their flat in a new building on Leninsky prospect in 2010. The repair took one more year. Marina made acquaintance with the designer Natalia Lebedeva long ago during the repair of another apartment. The relations designer – customer turned into a close friendship since that time, and Natalia thought out a new apartment again.

Notwithstanding that the apartment is located on the 32nd floor of a new building, difficulties occurred with a free layout and walls: the space was broken and geometric. The owners wanted to leave as much open space as possible at a small metric area. So, an idea of a studio with a well thought-out zoning appeared. An artistic constituent was predetermined by the hostess’ love for Paris. By the designer’s idea this city in the interior is symbolized not by the typical Eiffel Tower and Arc de Triomphe, but a cabaret.

Neutral grey was chosen as a basic color. It is completed by addition of other patterns: glass, mirrors, ceramic granite, teak, mosaic. Finishing of entry elements including air conditioner is in harmony with teak in the bathroom. Liza Minnelli welcoming the guests at the entrance sets further aesthetics in cabaret spirit at once. 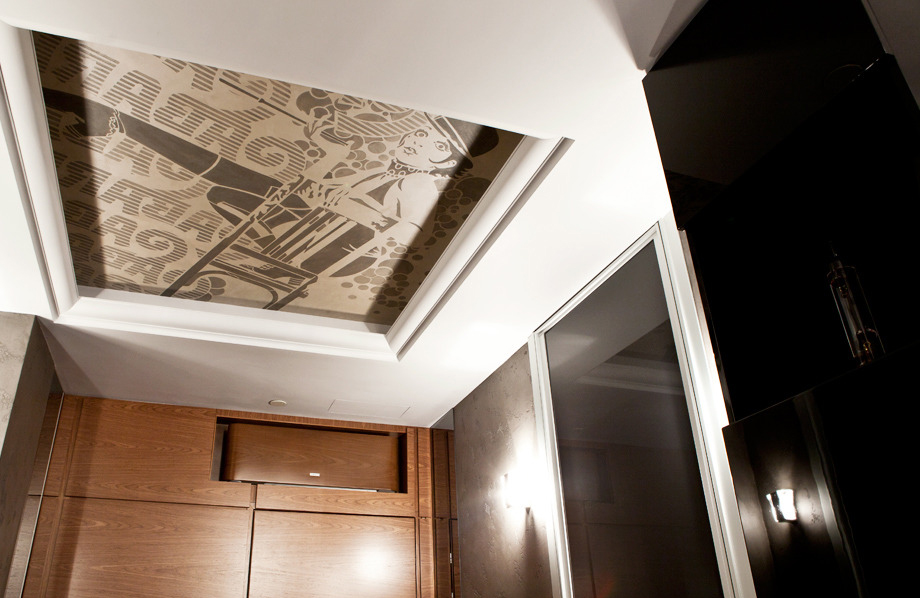 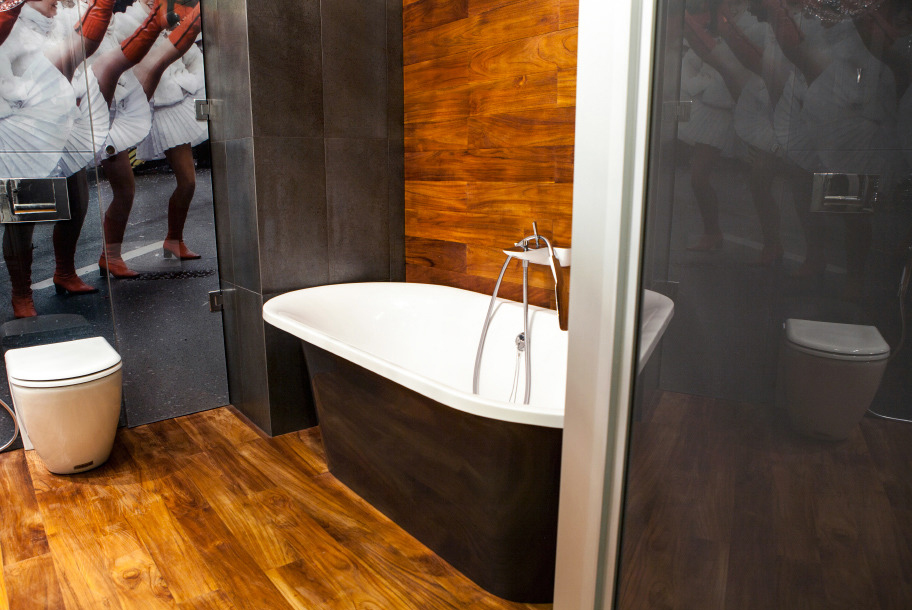 There is a bathroom to the right of the entrance door. Natural teak is used in the floor and walls finishing in it. Plenty of mirrors, glass, and other reflecting surfaces not only extend the space visually but have a functional purpose: there are wardrobes and utility sections behind many of them. 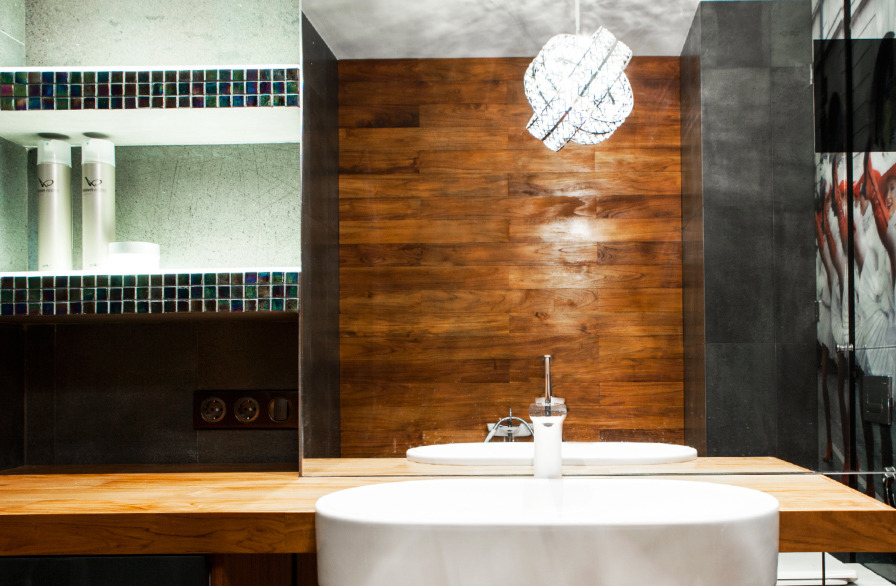 The tabletop in the bathroom was made to order of the same wood. Finishing of shelves has something in common with mosaic in a shower cabin. Magic Mirror systems are built in the mirror in the bathroom as well as in some other surfaces in the apartment. So, one can watch a film while washing up or having a shower.  The teak is Rad Wood, the sanitaryware is Duravit. 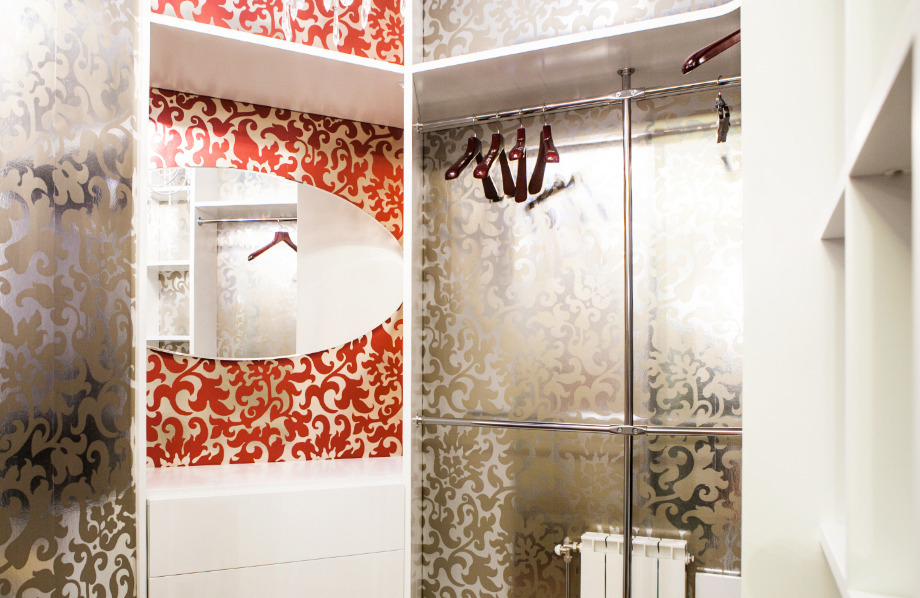 There is a wardrobe room, the walls of which were put up with challenging wallpaper which was unlikely to be used in the finishing of basic spaces, opposite the door to the bathroom. 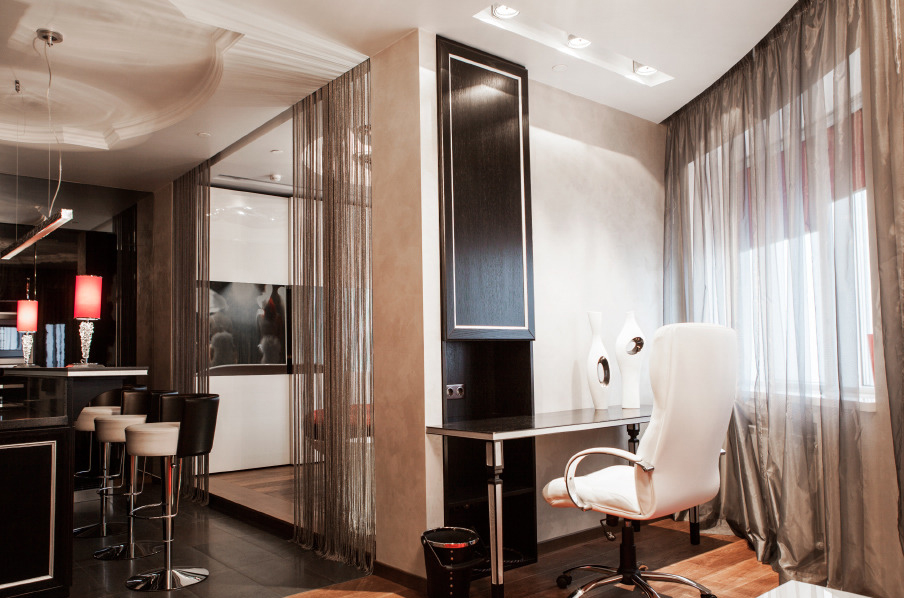 The furniture for cabinet zone was made to order. The carpet is Master Carpet. 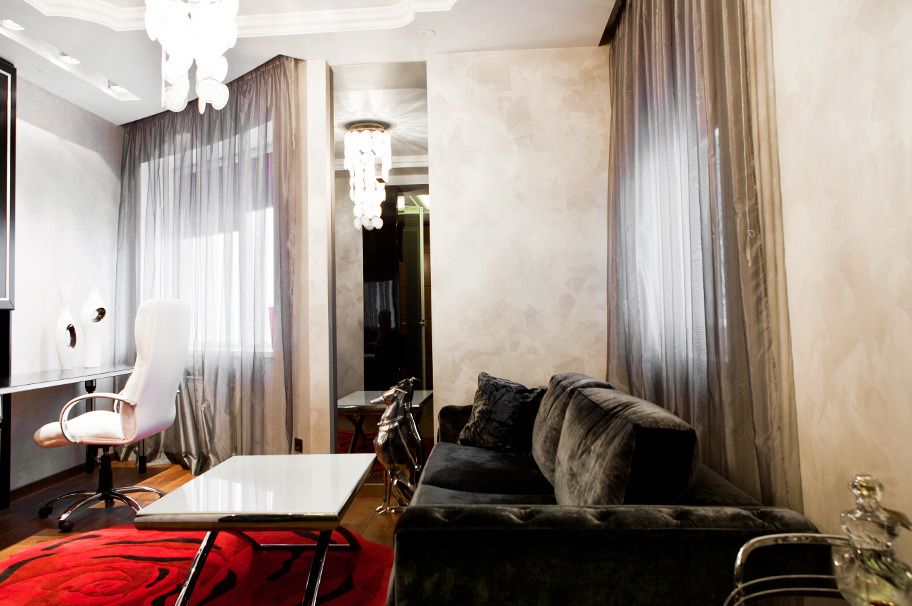 It was decided to make the interior bright but ready for transformation, as the apartment will be rented most likely or someone from young children of the owners will move in. Folding chairs are stored in the wardrobe room, and a coffee table Calligarisis is transformed into a dining table, growing in size and in height. 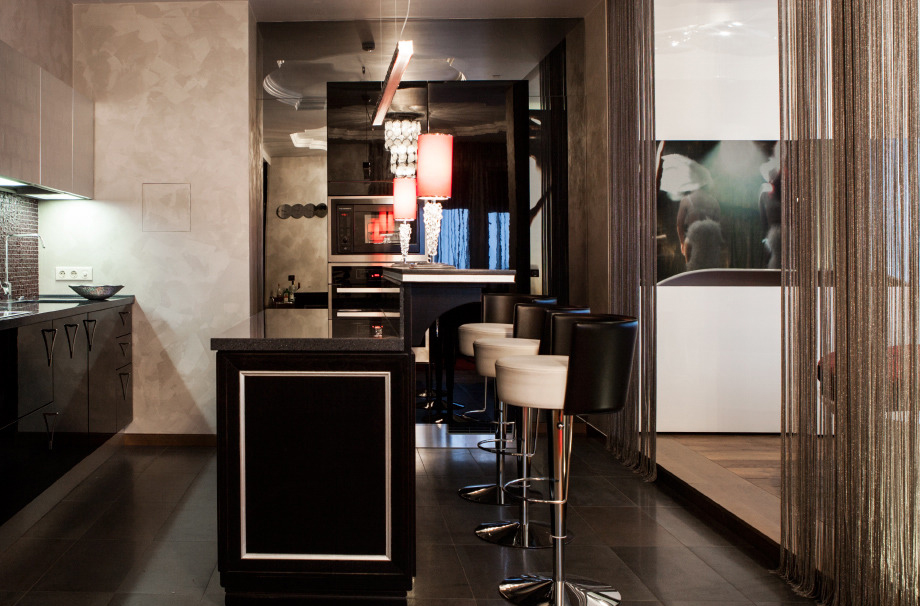 A kitchen island, which is a bar counter at the same time, is Copat, model Loggia. Bar chairs are Aster.

Mosaic is also used in the finishing of the kitchen Aster, model Domina. 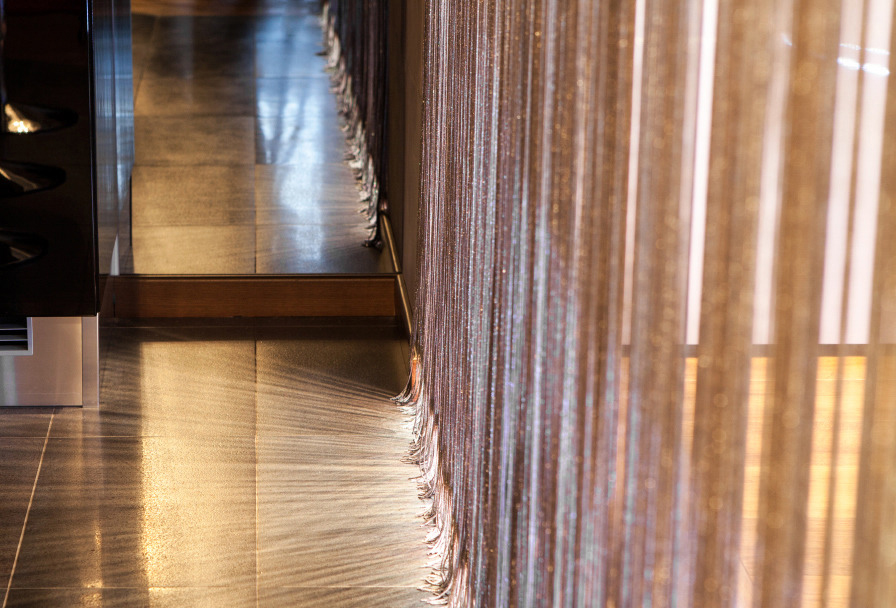 A large number of lighting variants is provided in the apartment, so that one can choose the most comfortable for any mood. 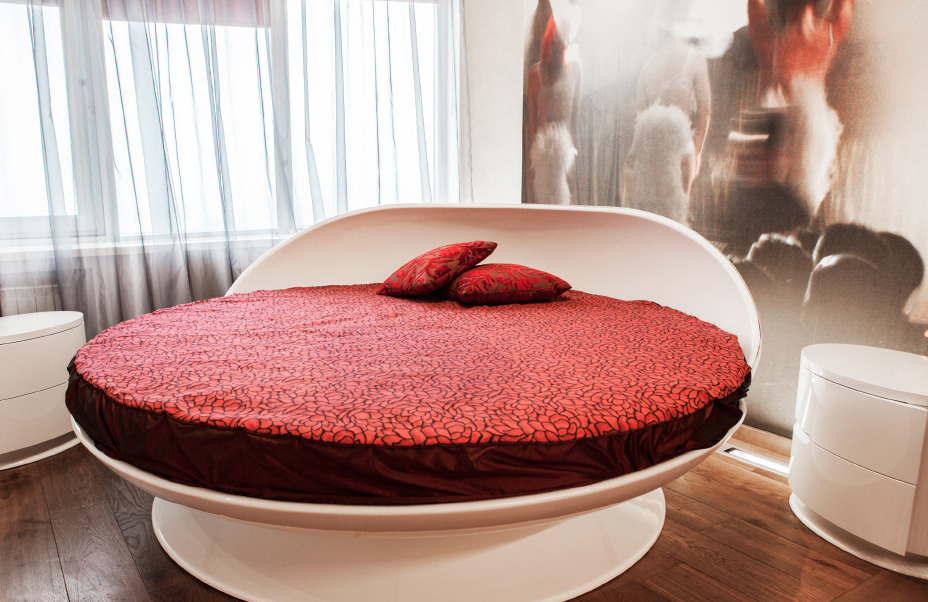 The bed is Serenissima (model Calice) and it is remarkable that it turns around. Such solution besides a wow-effect has quite reasonable grounds: Magic Mirror system is also built in the wall with mirror surfaces, and there is no less interesting view from the 32nd floor – future dwellers will have a free choice. 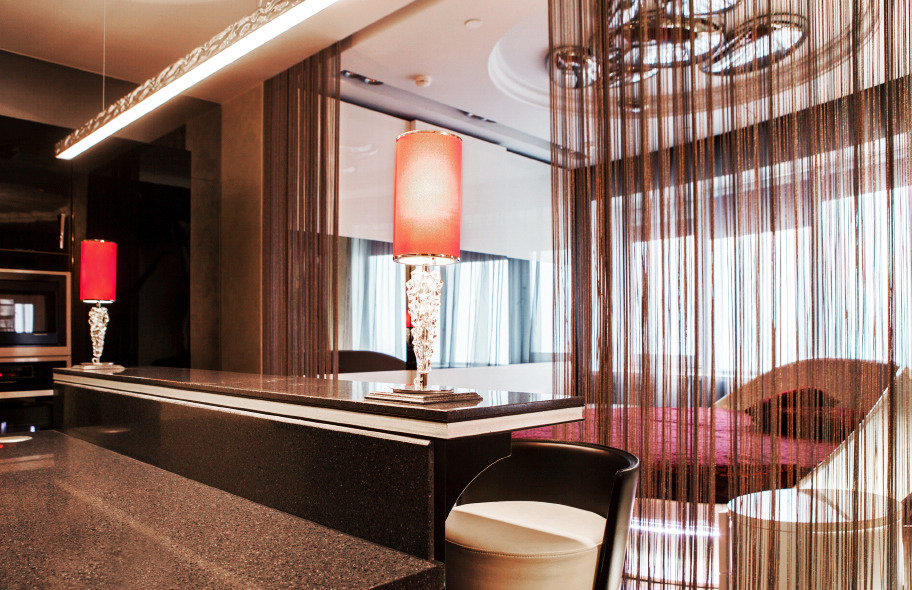 A lamp in the form of mercury drops hangs above the bed.