Mariya and Maxim moved into a new building near the Gulf of Finland two years ago because of their second kid birth. The owners who always lived only on Vasilyevsky Island were attracted by a semicircular layout of the apartment, impressive metric area, and a view from the 12th floor. Half of windows face the gulf and the river Smolenka, the rest windows face Krestovsky Island and Petrogradskaya storona. 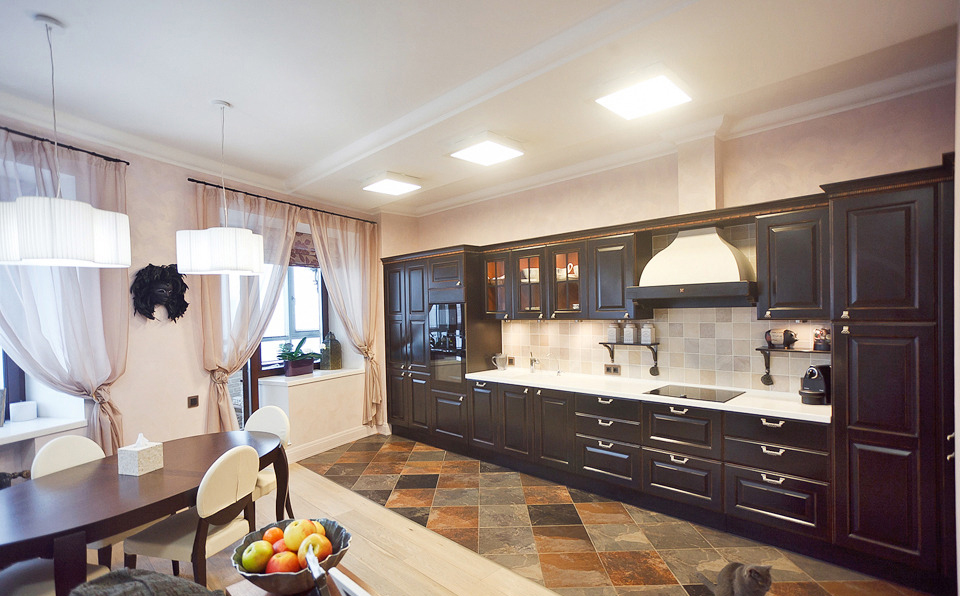 The couple made a global replanning: they enlarged the kitchen – living-room and the children’s room due to the cabinet, replaced the wardrobe room with a shower room, and arranged a separate storage space in the hall. It allowed not to clutter up the apartment with excessive wardrobes.

The owners hired a construction brigade for the repair. Scratches of the interior and many furniture items were made by the hostess herself. The walls in the entrance hall and the living-room which is combined with the kitchen were covered with decorative plaster.

The complete kitchen is Berloni, the table and chairs are Сaligaris. The wall clock, a present from the hostess’s father, is Diamantini Domeniconi. The clock waited in the wings for two years and it was the first interior item which appeared in a new apartment after the move. The hand knotted carpet under the coffee table was bought in a small seaport town Es Suveira in Morocco. Immediately after the move they sent it to a dry cleaner, where it was lost for a year. Handmade masks were bought in a workshop which makes attributes for the Venetian Carnival. The rack is filled with presents brought from different countries by relatives and friends. 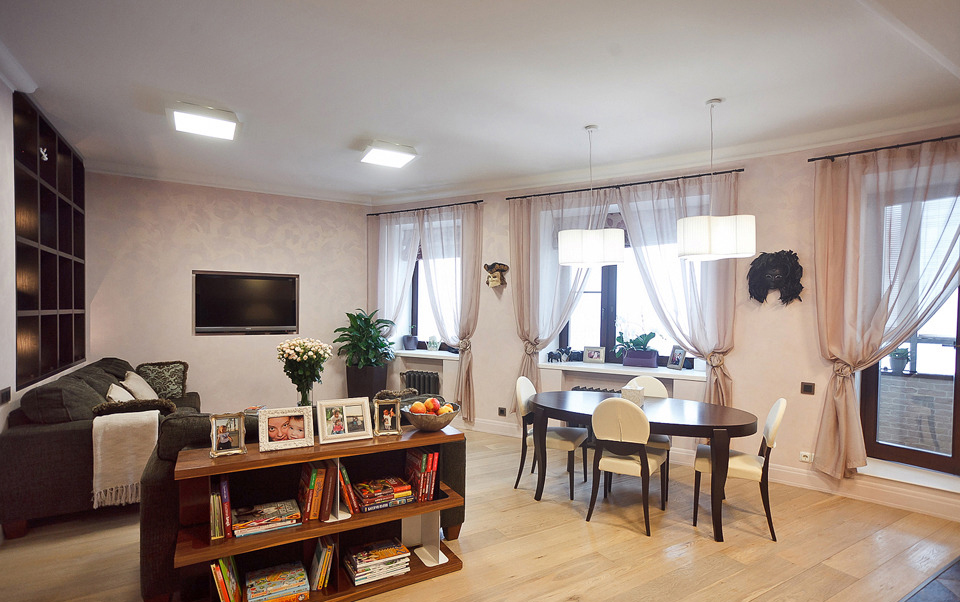 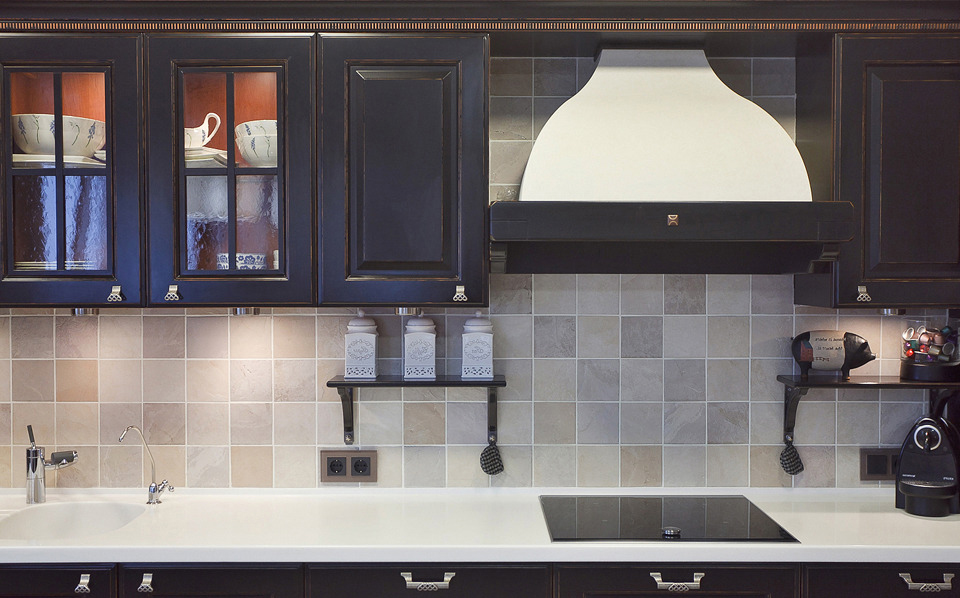 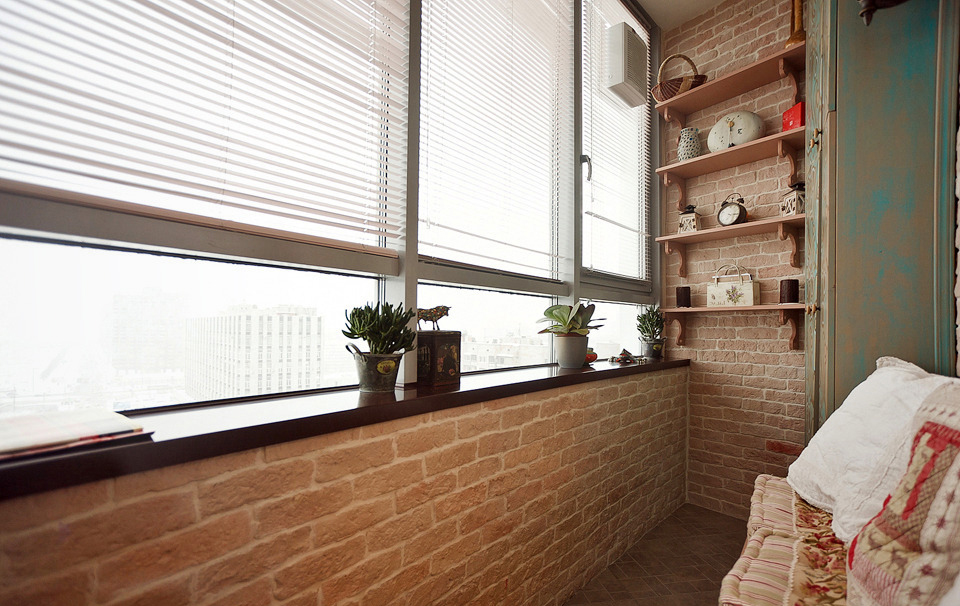 A balcony is a hostess’s personal space. A small sofa and a wardrobe thought up by her were made from locally available materials, and the fresco was made by the artist Ilya Nikitin. The sewing machine was brought from the disposal dump, the rack is filled with things from trips. 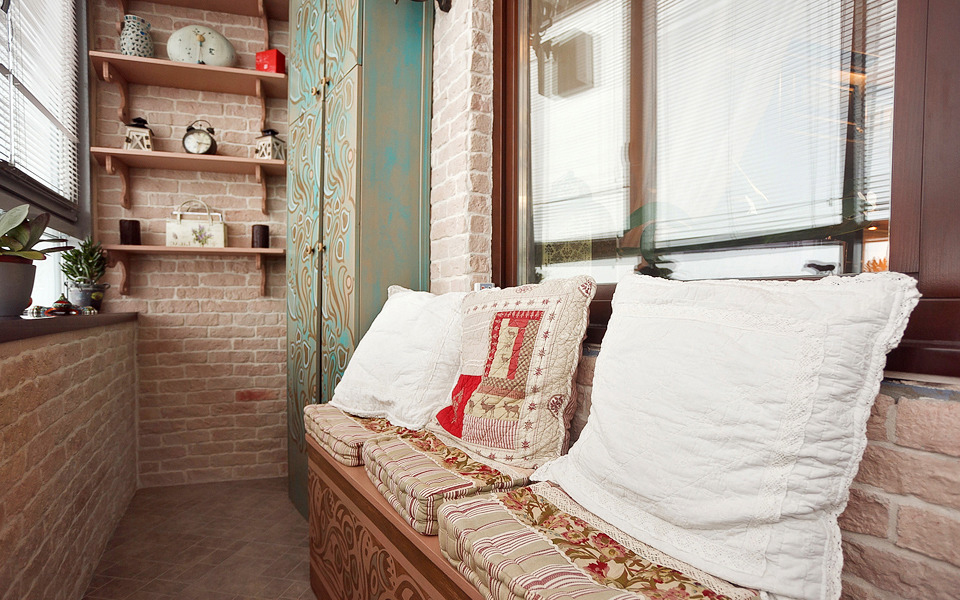 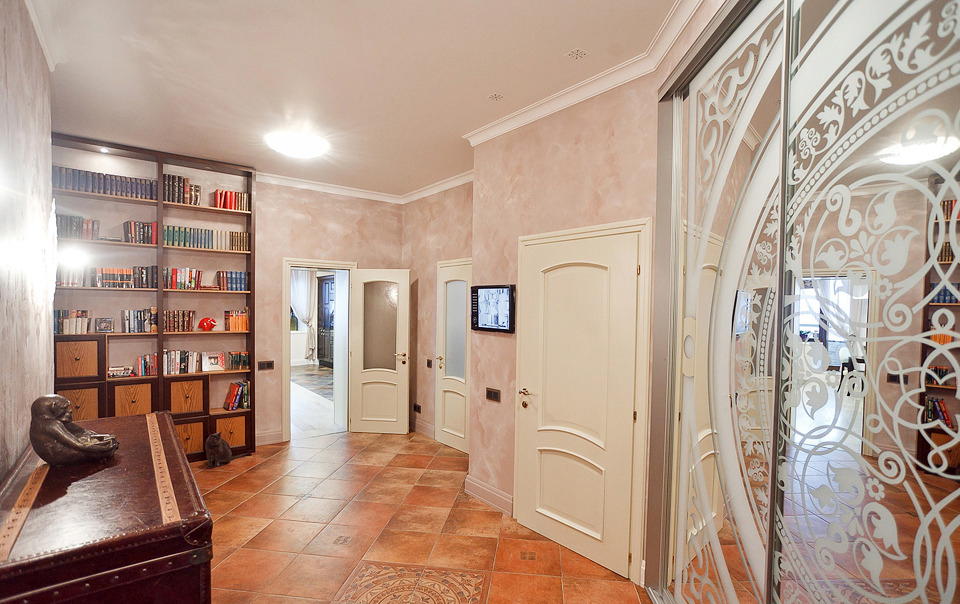 Folding doors and a library case were made to order from the hostess’s scratches after much thought. A heavy trunk, which was brought into the apartment by six people, and banquettes Bond St. London are among interesting details. Bracket lamps are Ligne Roset. Lamps in them are reverted in such a way that the lamp form is projected on the wall. 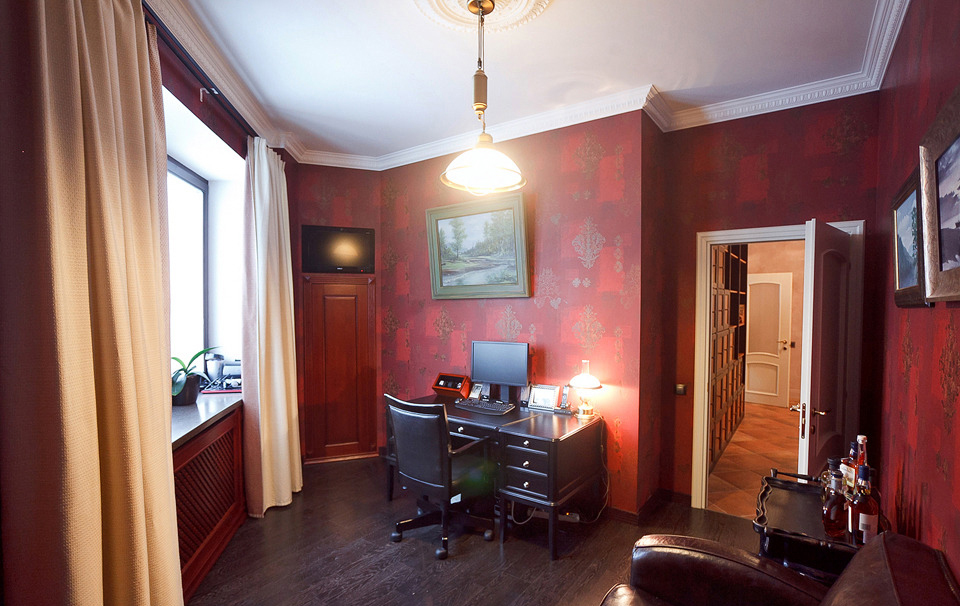 Maxim’s cabinet is of classical style. The pictures were painted by Mariya’s grandfather, a geologist, travelling about the whole Soviet Union. Some works did not survive due to a poor quality of paints and complex camp conditions of life, the rest of them had been in Vorkuta for a long time until the uncle brought them from there. A sofa is Home Cоncept, a table with alcoholic drinks is Villeroy & Boch, a rack is made to order. 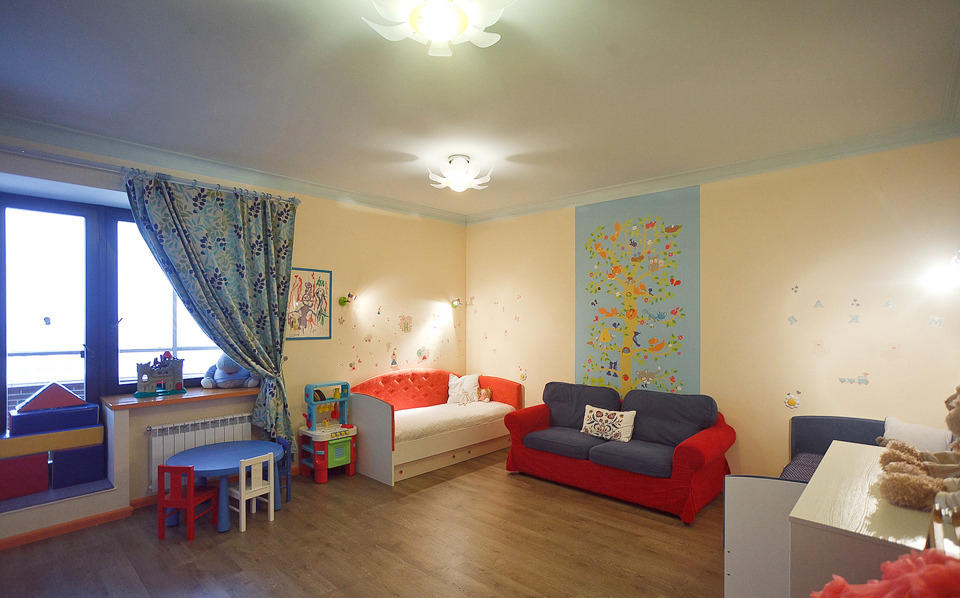 The owners decided not to clutter up the children’s room. The wood and stickers are Eijffinger, sofas are from Ikea, all other furniture items were ordered. 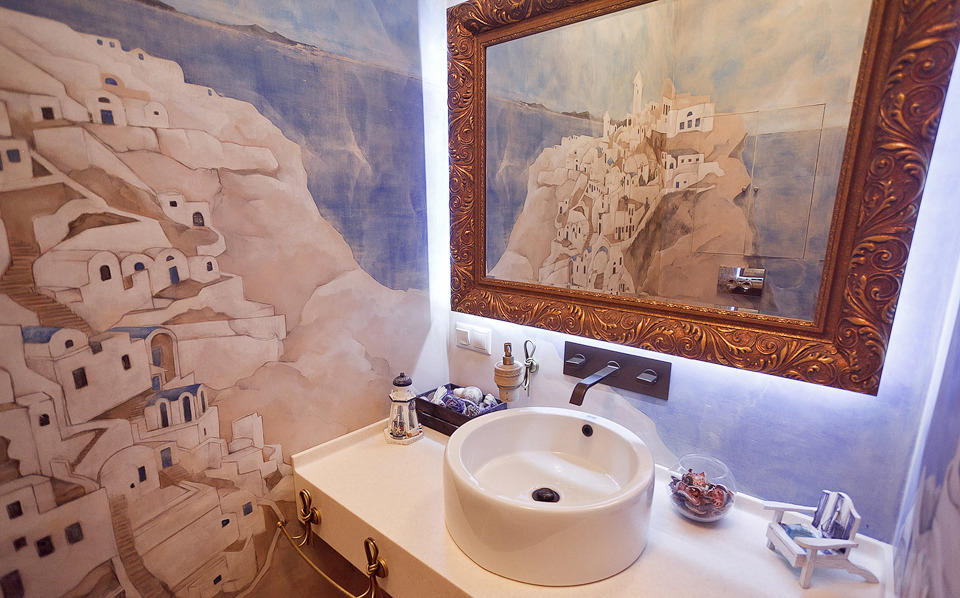 Fresco in a guest toilet was painted by Ilya Nikitin. There is a small Greek island Santorini on it, whereto the whole family like to travel. 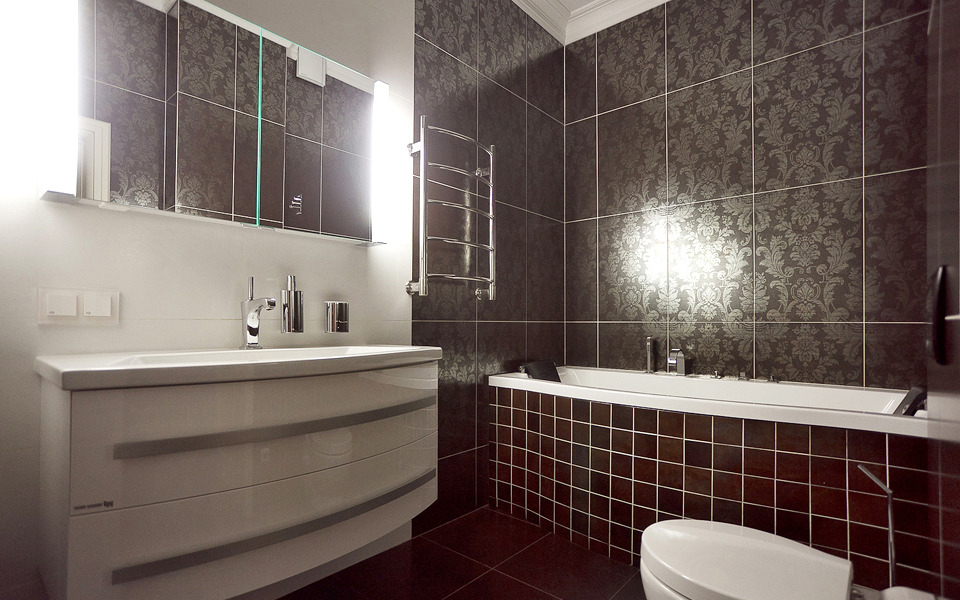 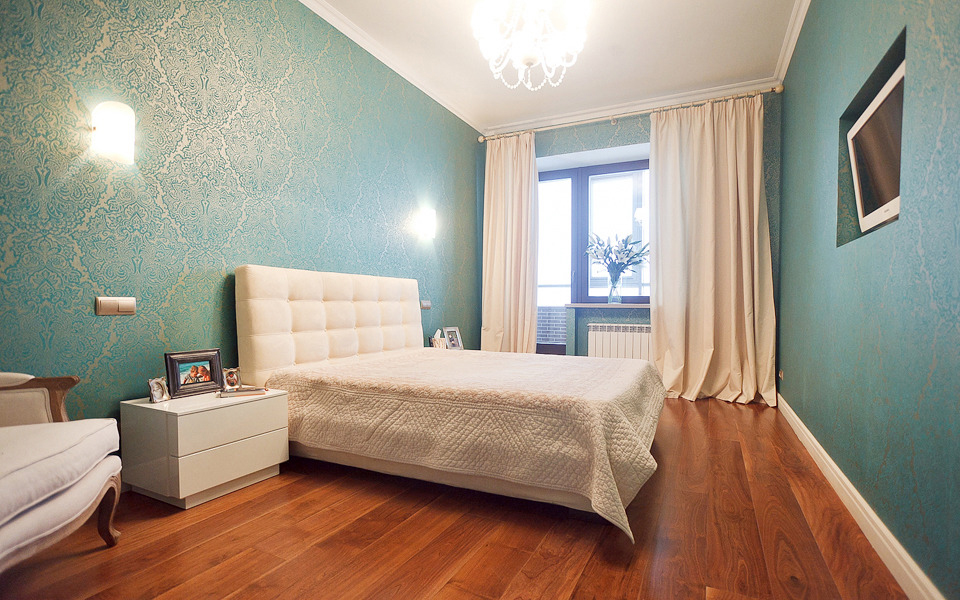 The hostess chose the wallpaper of turquoise colour by herself. The bed is Ligne Roset.