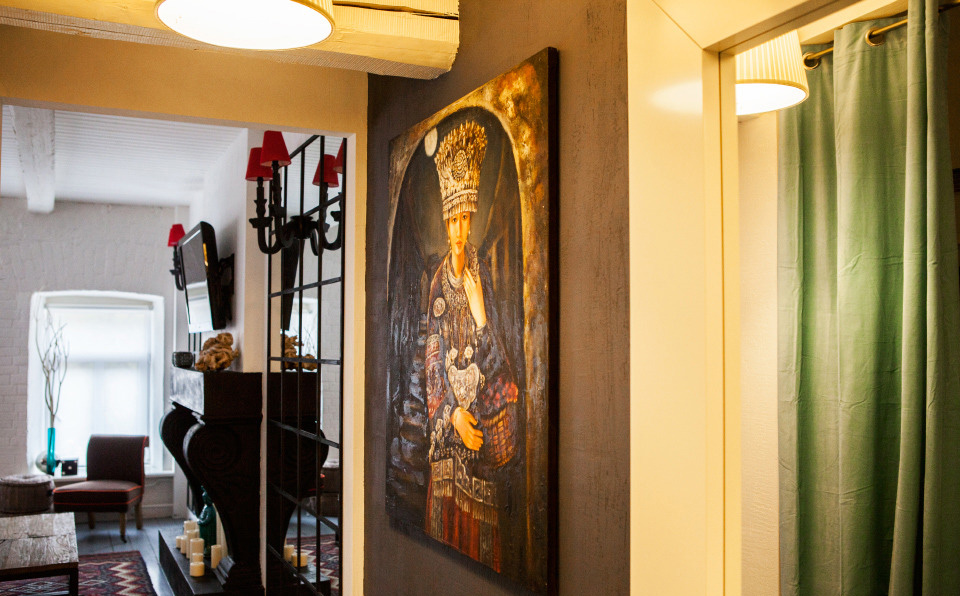 The owners bring new elements of decor from numerous trips. The picture in the entrance hall was brought from Bali.

While working at the interior of a small two-room apartment Ekaterina and Anton wished to make qualitative but low-budget finishing to the utmost. Part of furniture was own-produced, part of it was bought in ordinary shops. The main emphasis was laid on right geometry, harmony, and details.
OWNERS
Anton – a designer
Katya – a decorator

The designer Anton and the decorator Katya lived outside the Moscow Ring Road before, but they sold their apartment and bought a new one on Neglinnaya street after returning from Bali last winter. The apartment needed capital repair and replanning, but the owners were not embarrassed. Anton and Katya are engaged in interiors professionally and they know how to transform any space beyond recognition even having a low budget.

The owners are planning to travel more, leasing their housing, but they approached the repair thoroughly and did everything as if for themselves. Emphasis was laid on a decor in the apartment with a low-budget but qualitative finishing. Designers were not committed to one style, they experimented with textures and colours, and introduced matchable things to the interior smoothly.

Many elements of decor are from show-room at the school “Details” where novelties from a famous French exhibition Maison & Objet are brought regularly. Anton and Katya studied at “Details”. 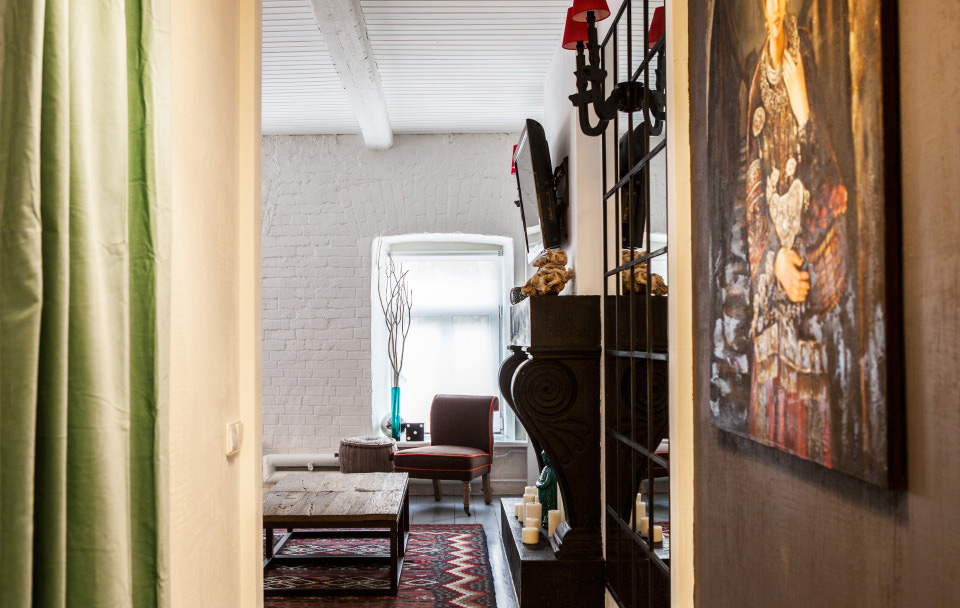 Mirrors transform to windows reflecting the light. Therefore, this solution proved its value both from the point of view of decor and function. Lamp brackets on mirrors are from the show-room of the school “Details” with red lamp shades from IKEA. 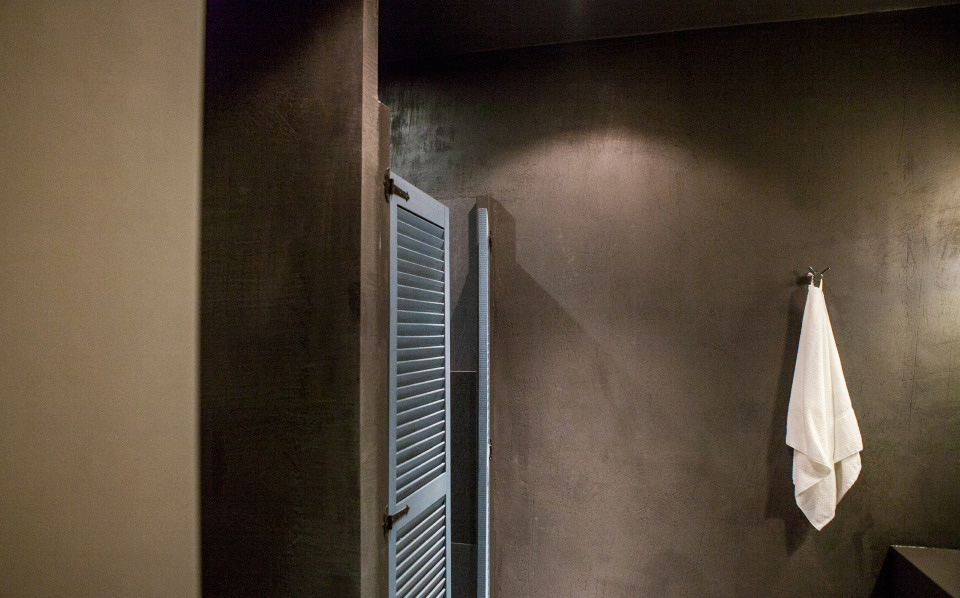 Katya made scratches in her notebook immediately and Anton made 3D-views which were added by clippings from magazines and pictures with ideas for each room. 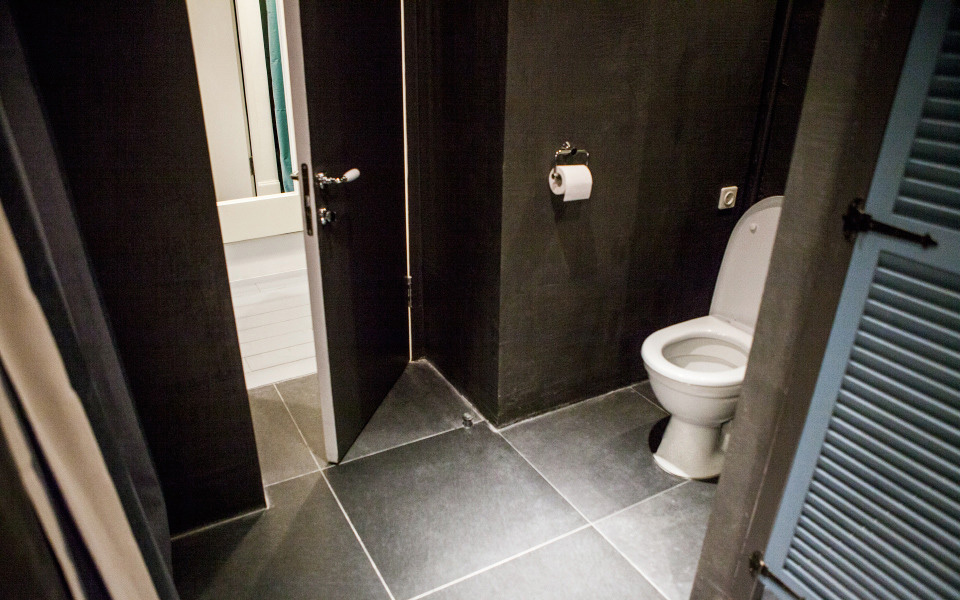 Contrary to popular belief not only light walls expand the space visually. Such effect can be achieved by dark colour shades in the finishing of walls and the ceiling, as well as by spot lighting. Textured rough cast was used in the bathroom. 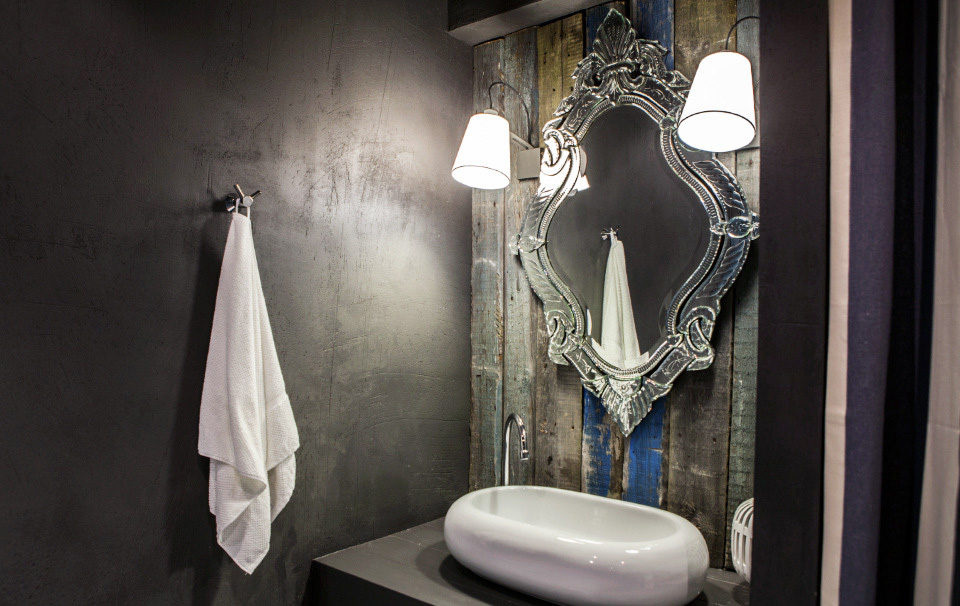 A lace Venice mirror brought from Bali contrasts with the wood – part of the fence of a forsaken country house. The sink in the form of pebble is Castorama. 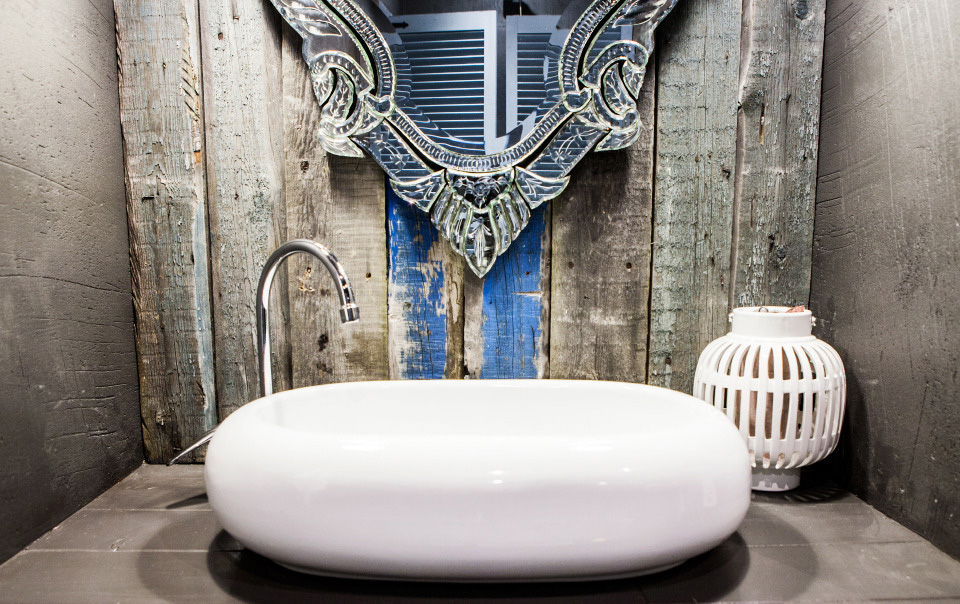 Initially the ceilings were within reach of owners’ hands. They managed to increase the height by taking wooden beams and coverings away and by battening of the ceiling. 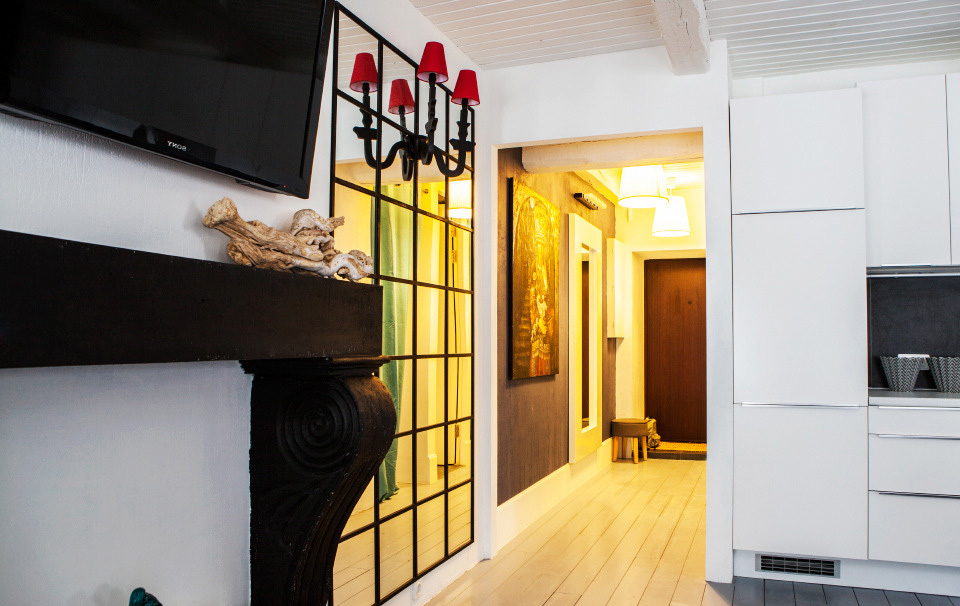 Due to combining of two adjacent rooms and a corridor they managed to arrange spacious zones of the living-room, the kitchen, and the dining-room leaving five windows along the perimeter. 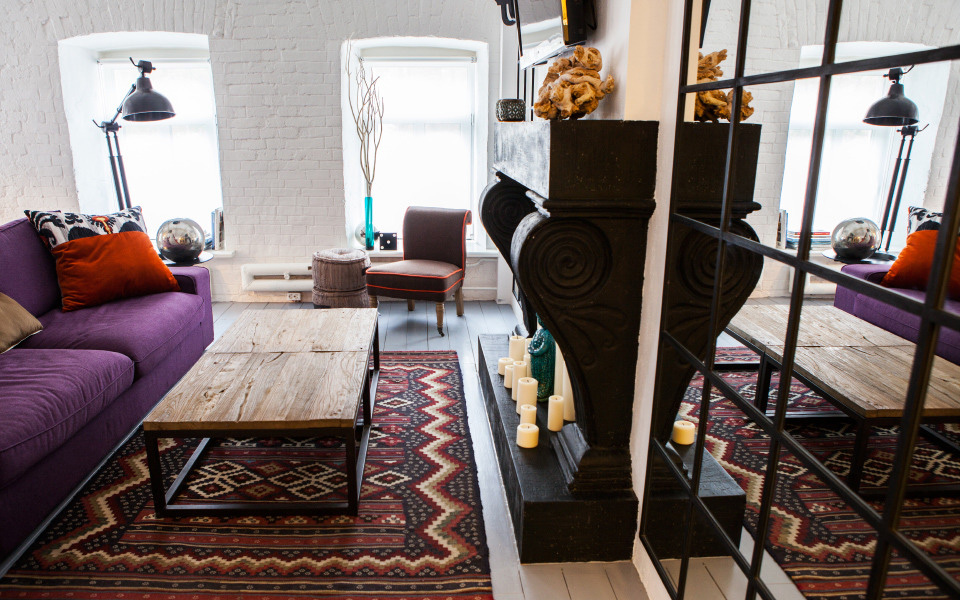 A candle fireplace was built instead of a classic one. 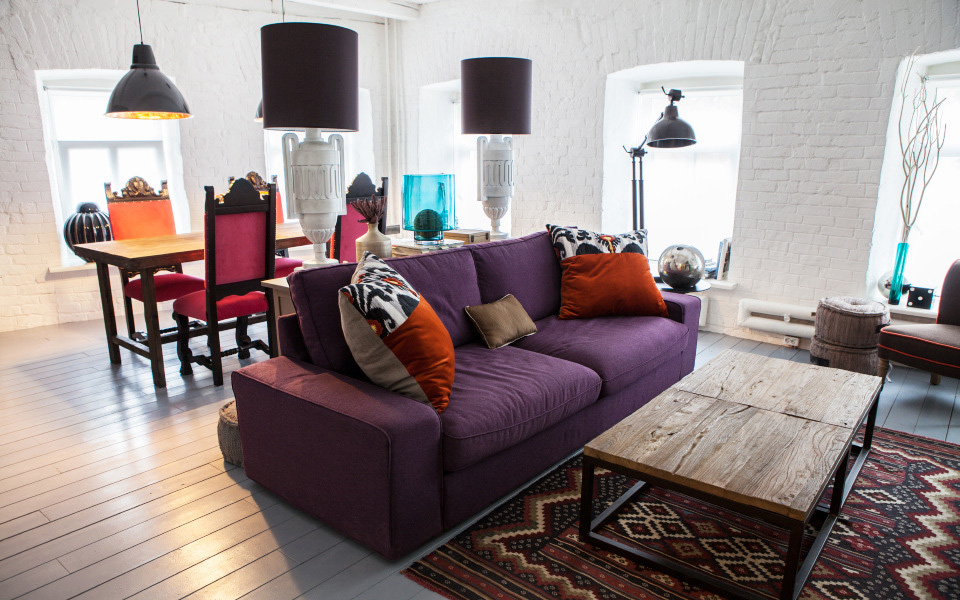 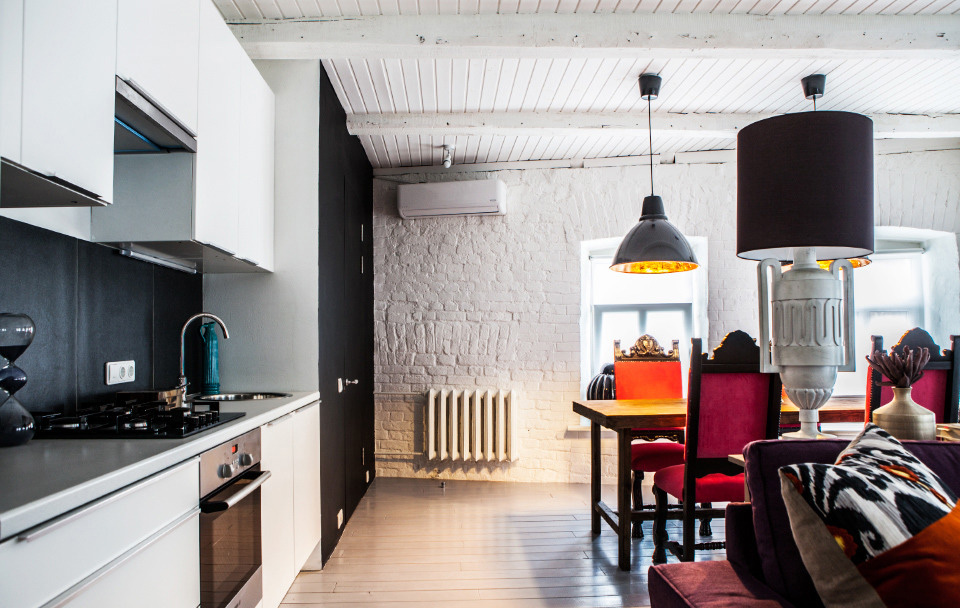 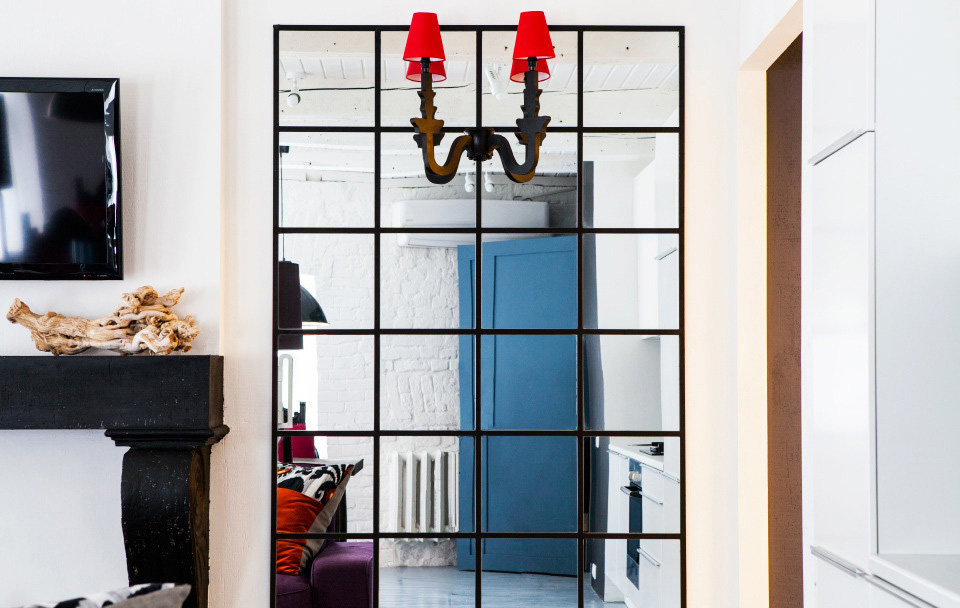 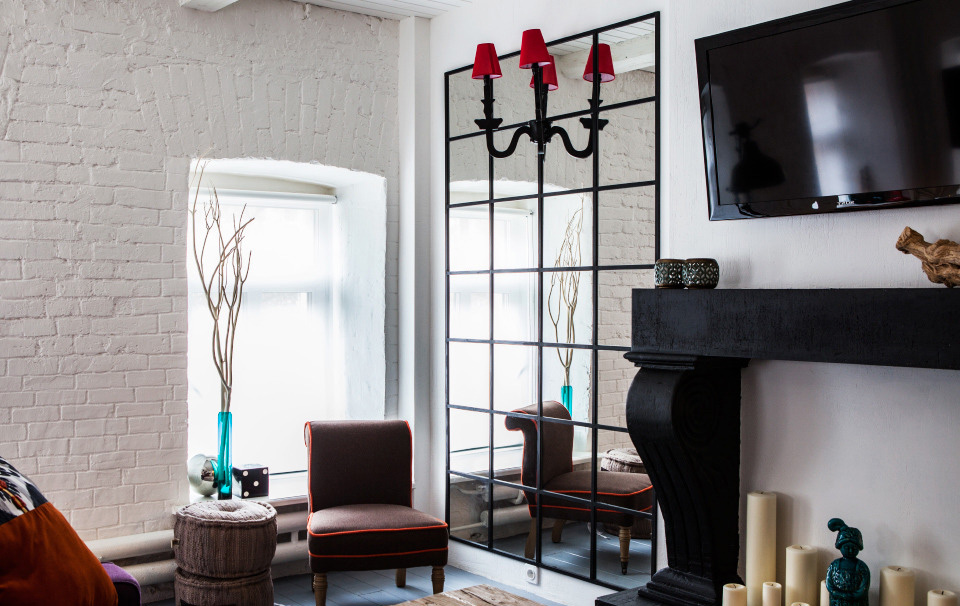 The dining table, which the owners noticed in “Neglinnaya Plaza” was worth money. In the end they ordered identical pine table for a favourable price. 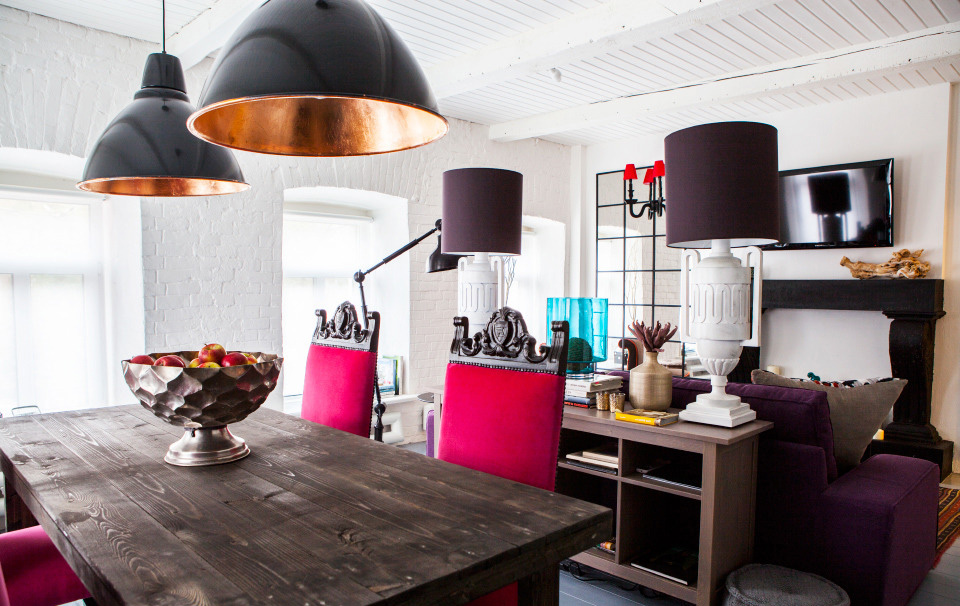 The chairs are produced at Anton’s furniture manufacture. Anton improved ordinary lamps from IKEA in a favourite way, finishing the inner surface with artificial leaf copper. 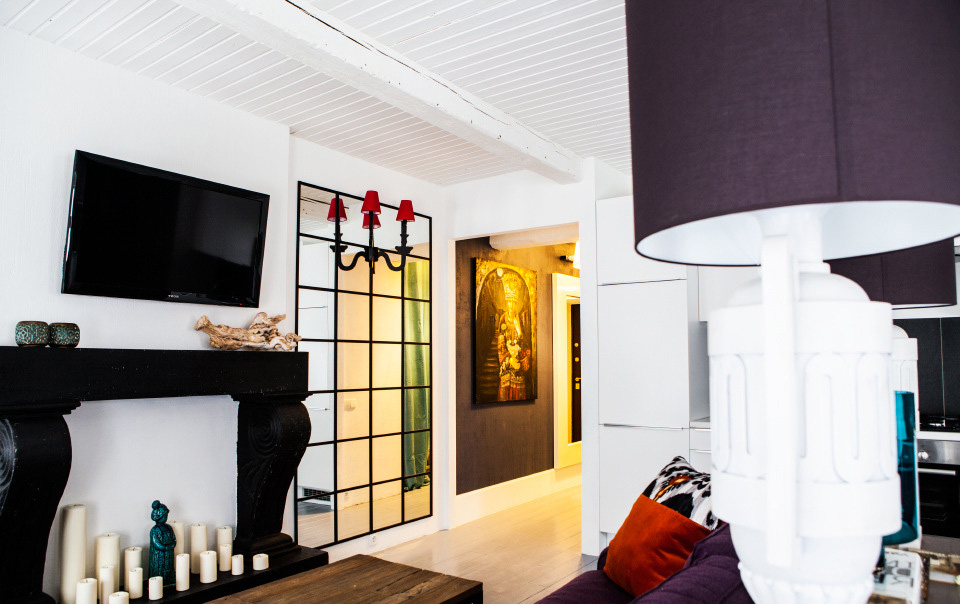 A tabletop of the coffee table from IKEA was changed into a silver plate. A new base for the tabletop was bought in the show-room “Details”. 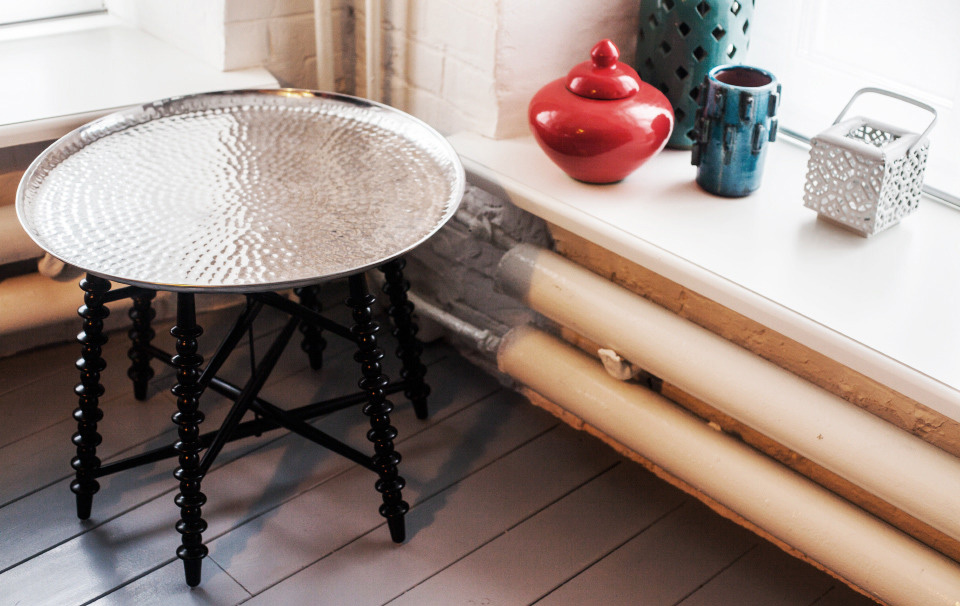 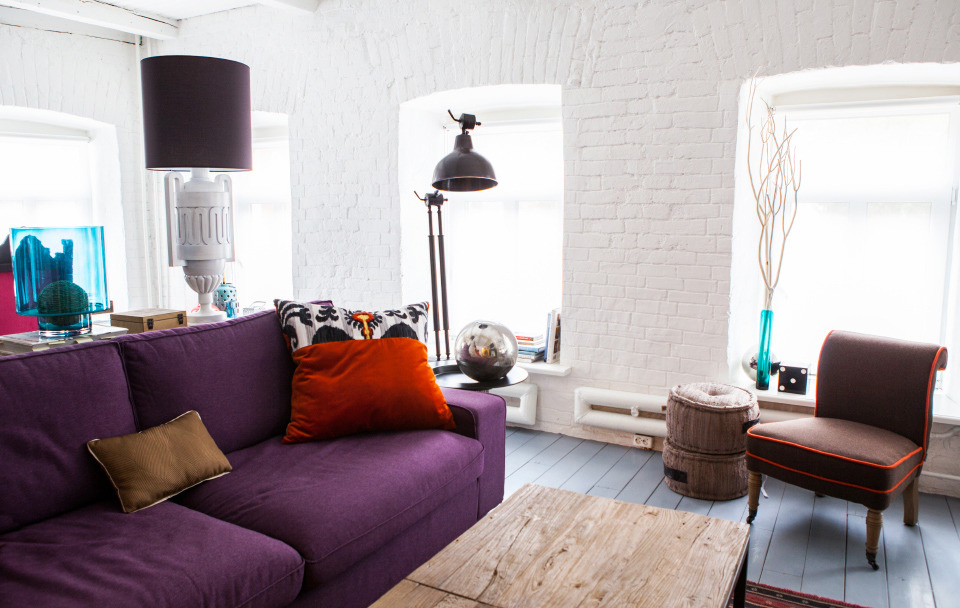 A black wall behind which there is a bedroom is pencil, and one can write in chalk on it. 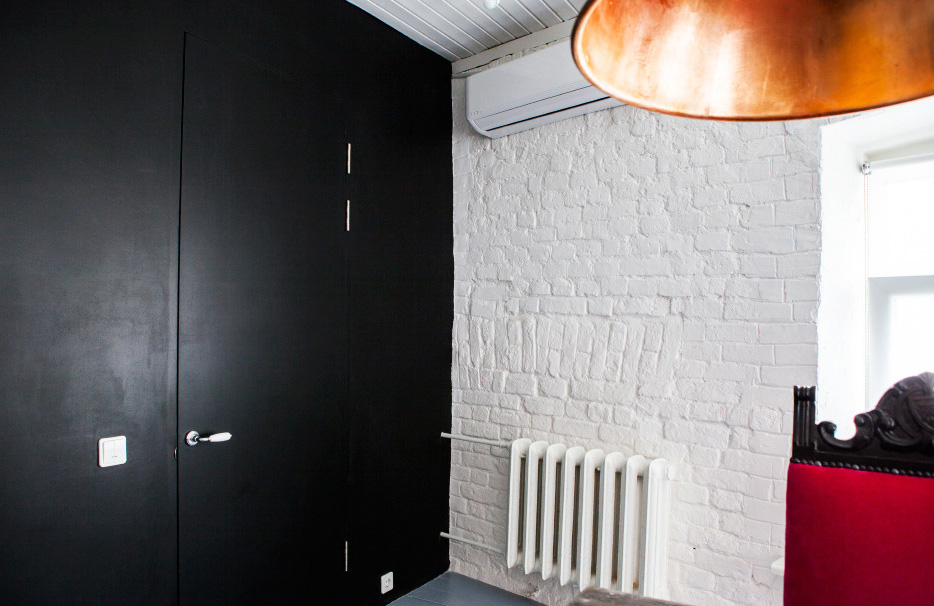 A complex shade of a blue colour which shows to advantage in the sun, spreading through wooden blinds, was chosen for finishing of the bedroom. 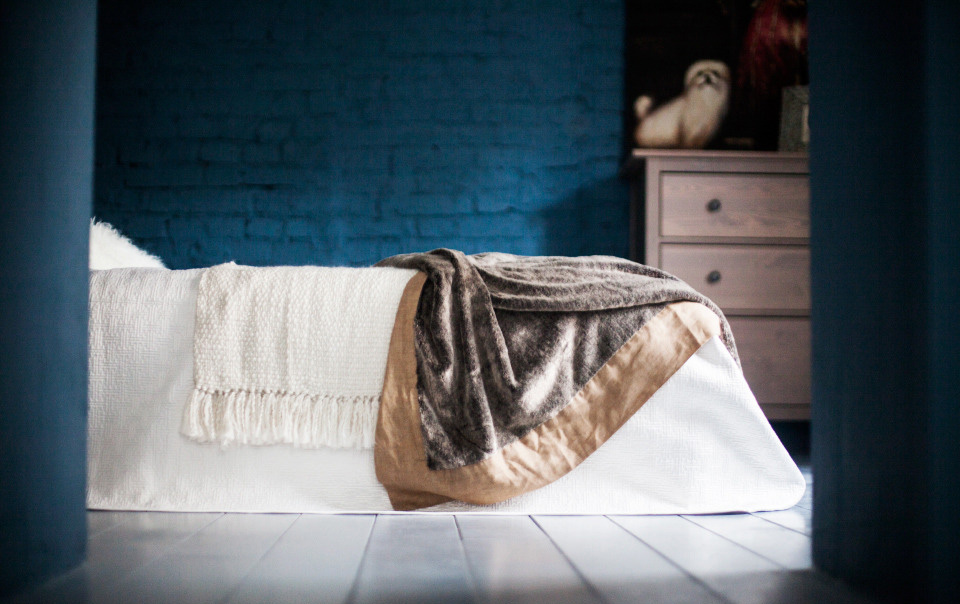 The chest of drawers is IKEA. 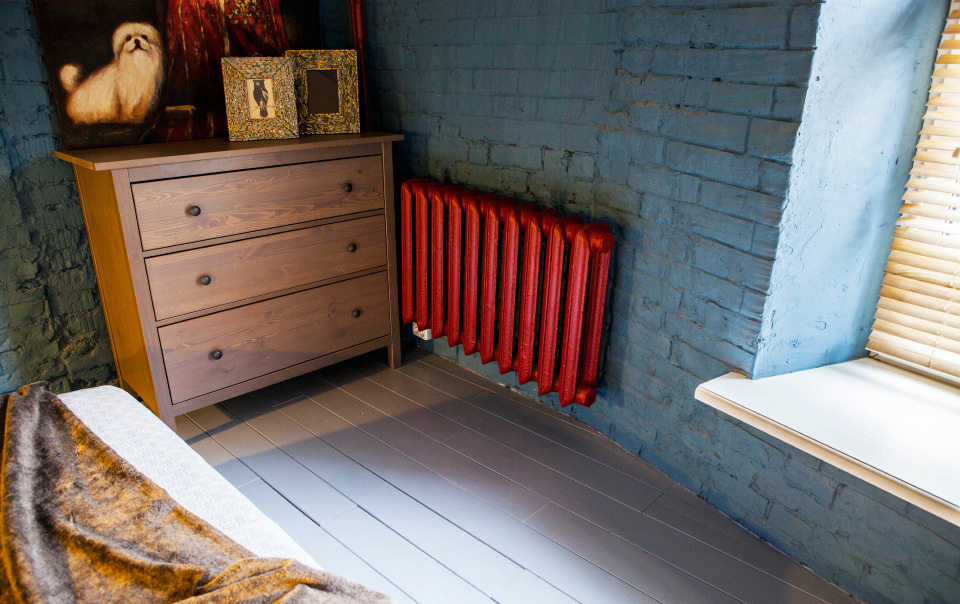 Inventive owners made the bed-head from doors. The bed is IKEA, pillows and blankets are Zara Home, “Details”. 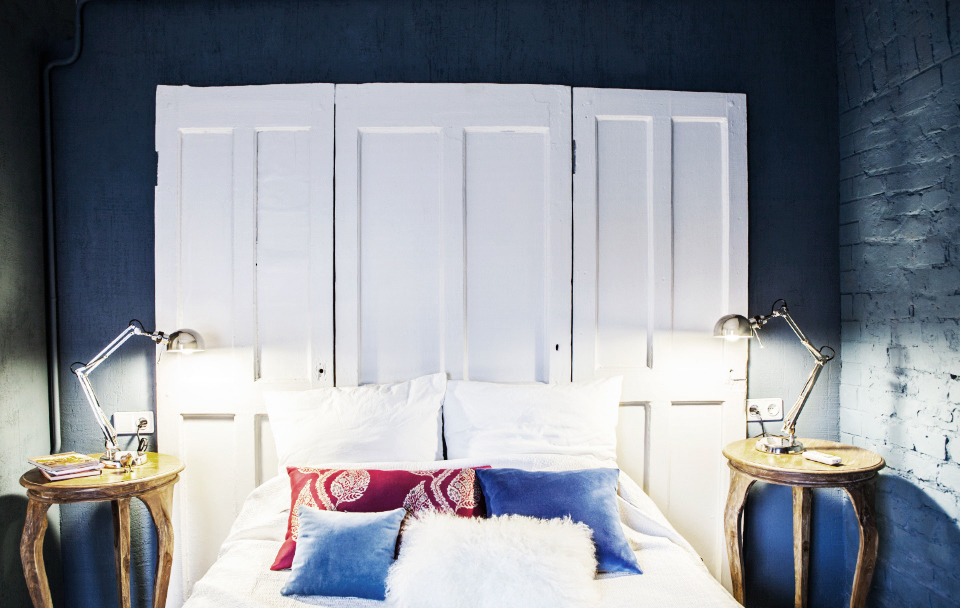 Bedstands were brought from Bali. 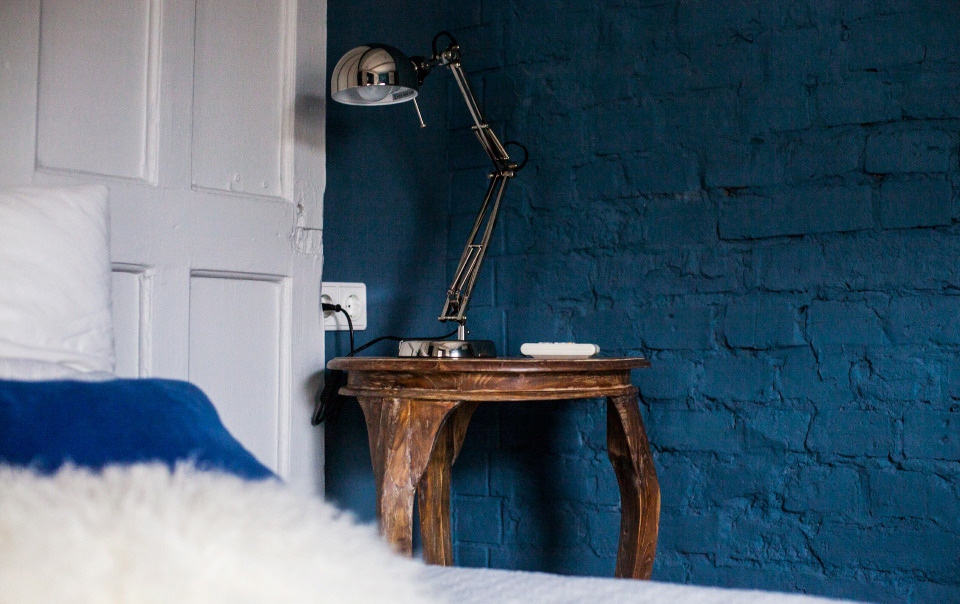