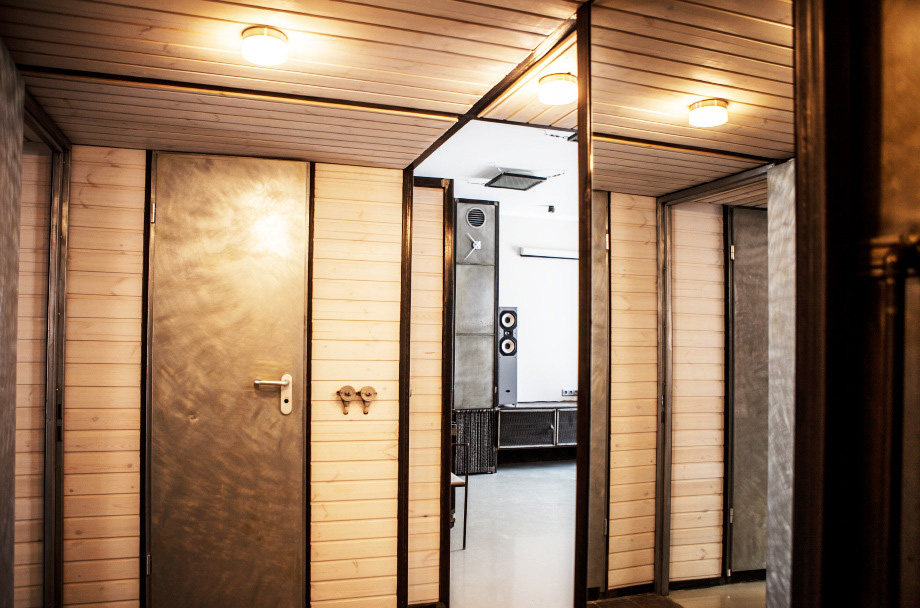 A four-roomed geometric apartment was covered with metal sheets almost completely before, but then this base was changed to wooden. Industrial interior with author’s furniture from metal pipes is completed by sophisticated layout and precise proportions.

The renewed apartment of the architect Peter Kostelov with precise proportions and the use of industrial materials in the finishing.

OWNERS
Peter Kostelov – an architect and designer, Olya Feshina – an artist and designer of modern costume and ornamentals

Peter bought the apartment on Bolshaya Polyanka in 1994 and it represented a bachelor studio for the first 10 years. The kitchen, the living-room, and the work room with a podium passing through the whole apartment from windows to windows were combined in a single space.

His life changed with the appearance of Olya Feshina: the owners began to work at home more time, they needed personal environment for work. At first Olya shot her collections right on the podium, but in 2003 the couple decided to make a capital repair.

It was not difficult because initially Peter laid the foundation for future transformations in the apartment – the pipe frame which allows changing most of interior solutions while keeping the main idea. Peter has recognizable author’s style, the distinctive feature of which is the use of industrial materials, one would think not intended for the interior finishing.

The forming concept of space is a single all-metal frame from steel pipes which was covered with metal sheets in the first variant. The author himself defined this version of appearance as industrial, extreme, cold, gloomy, rigid, and dark. The experiment lies in the use of metal as the main material in the interior, and it was a success while being challenging and unexpected.

The apartment was changed fundamentally during the last repair in 2012, though the layout remained the same. It is quite difficult to define the space area visually: all premises flow to each other while being isolated, and this arises sensation of unity. It was fortunate to locate a spacious living-room, two cabinets, two wardrobe rooms, a bathroom, and a guest toilet room with a shower in the apartment due to a small kitchen and bedroom. The ceilings in corridors are significantly lower than in other rooms: entresols for storage are inbuilt in them.

The most spacious room is the living-room. Entrances to all other rooms go from here.

The apartment appearance change was planned at the stage of design. The basis is an iron frame, precise geometry, and mathematical calculation: if one divides the ceiling height by 4, a 70-cm pitch will be obtained. This became a uniform principle which subjected the whole interior. For instance, three times 70 – is the height of entresols. Double 70 – is the height of the wall wardrobe in the living-room, four times 70 – is a bookstack.

The frame was covered with metal sheets before, but as expected, the experiment was continued and the initial idea was opened anew in 2012. The space began to look differently and it was reflected even in the name of a new project – WWW.AP (Wood Warm Wight Apartment). Such effect was achieved basically due to the change of metal sheets to wooden ones.

Stylistic transition was enhanced due to a warmer tone of grey as the main colour of walls, and interior details – curtains, pillows, and blankets.

One of wardrobe rooms is behind the glass wall, the cabinet is from the right.

The owners often travel, but such minimalism of decoration is supported during a routine life in the apartment. Few details, clothes, and ornamentals from Olya’s collections blended in with the existed esthetics.

The central group is covered with wood and divides the space into two large zones – guest and master. There is one more wardrobe room, a bedroom, and a cabinet on the opposite side from one of cabinets. One can go the central zone in which toilet facilities and a kitchen are located circle-wise and get into the living-room again.

The kitchen was made small intentionally: at first Peter and Olya were vegetarians, and recently have passed on to raw foodism, that’s why they do not need many kitchen appliances. 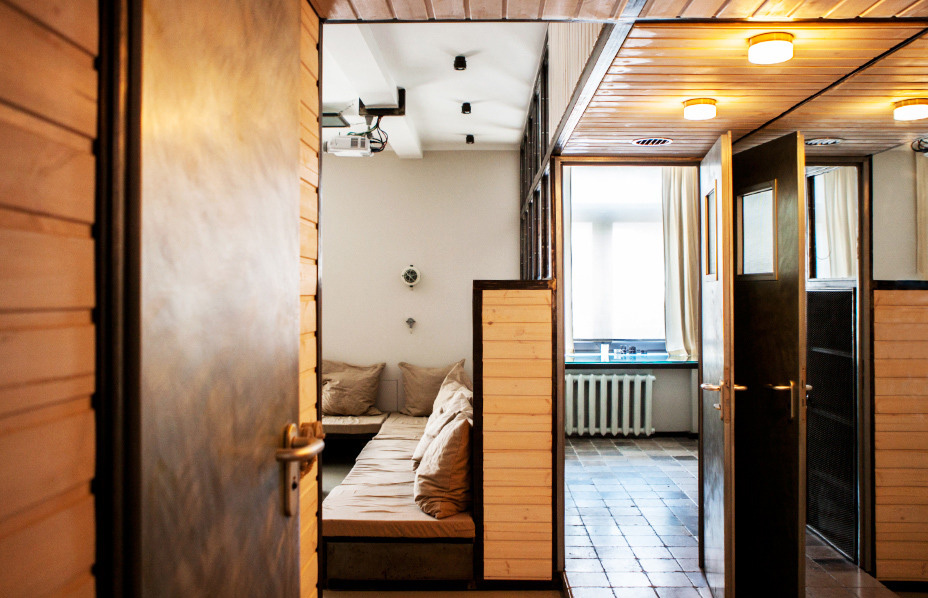 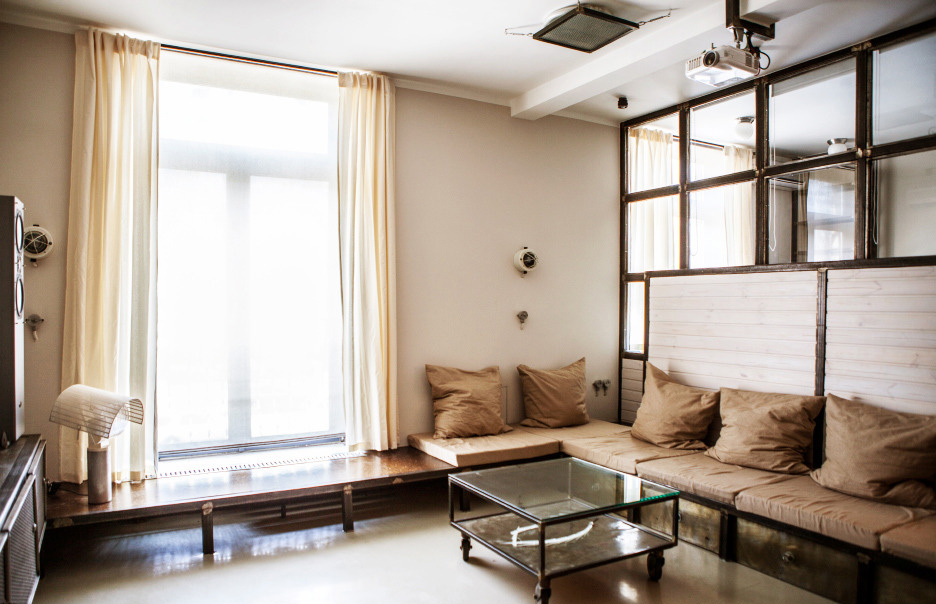 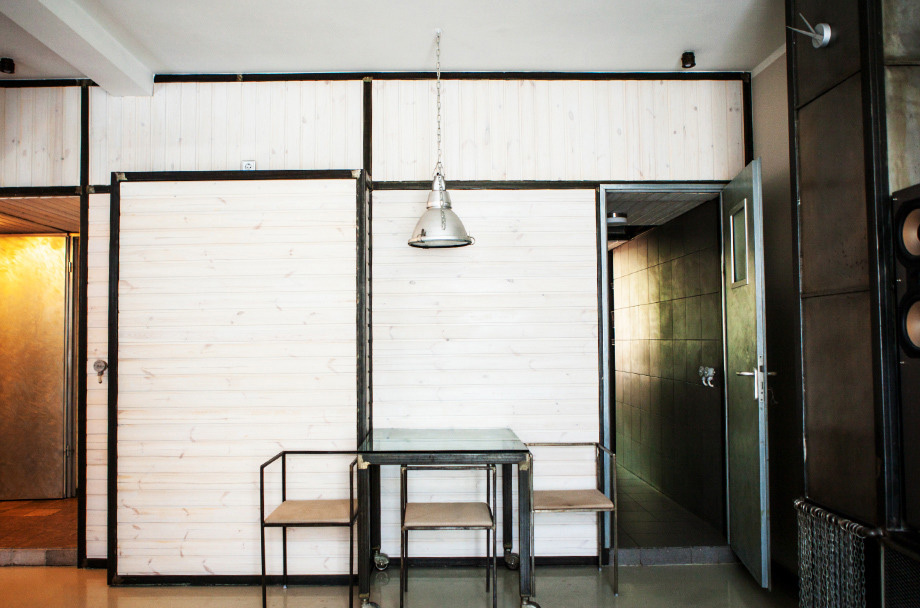 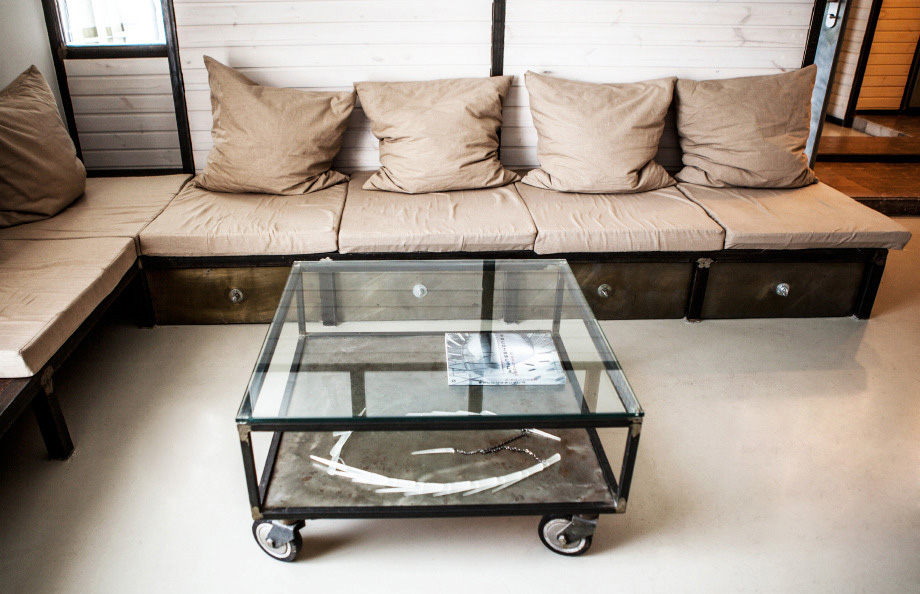 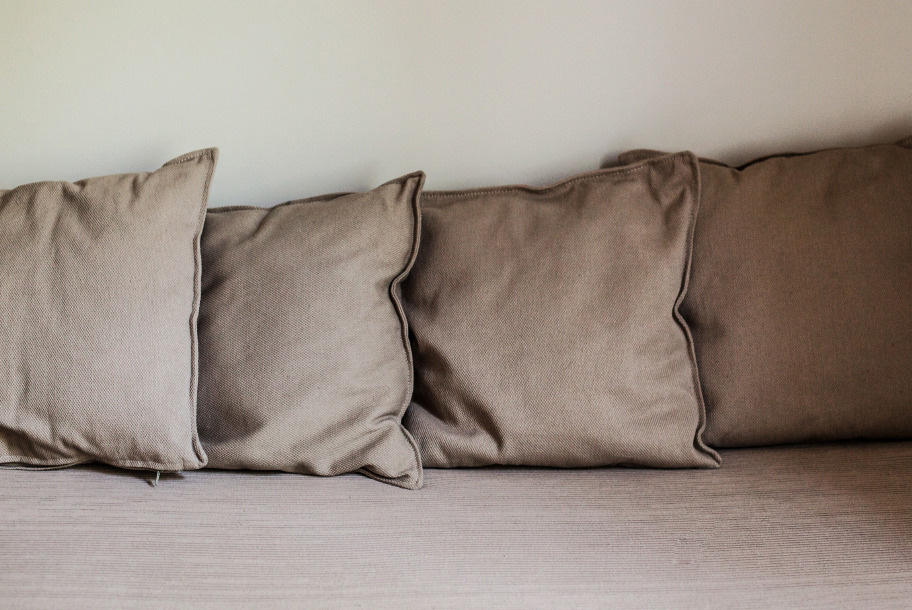 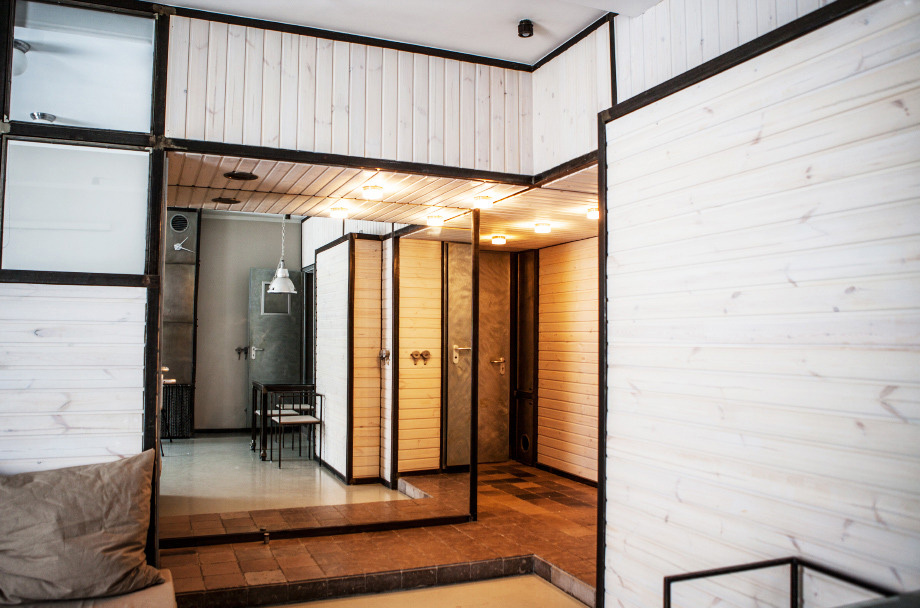 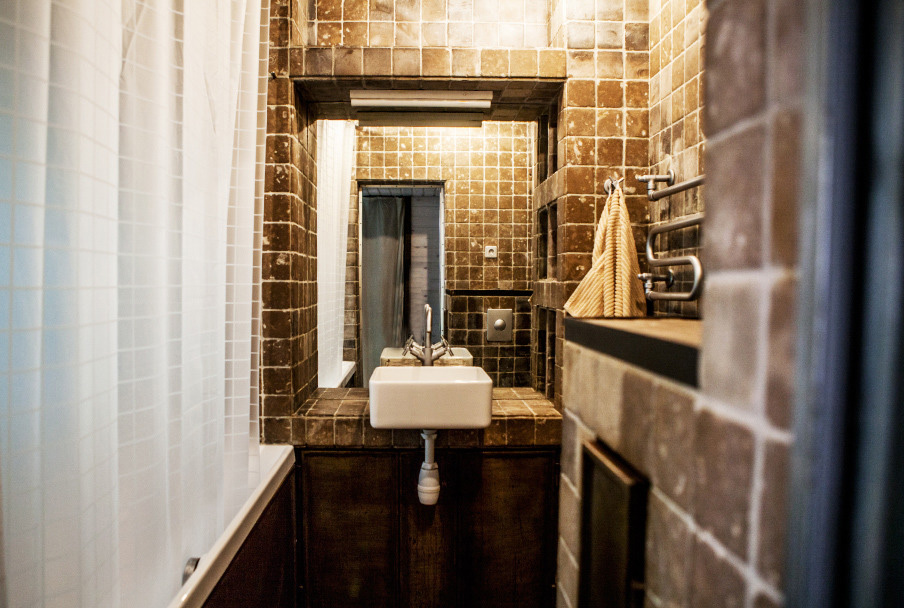 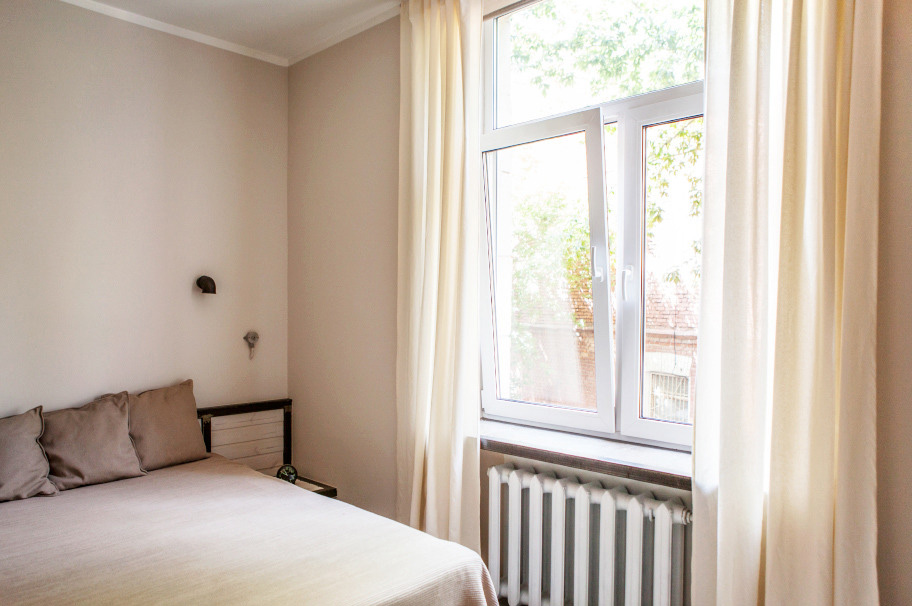 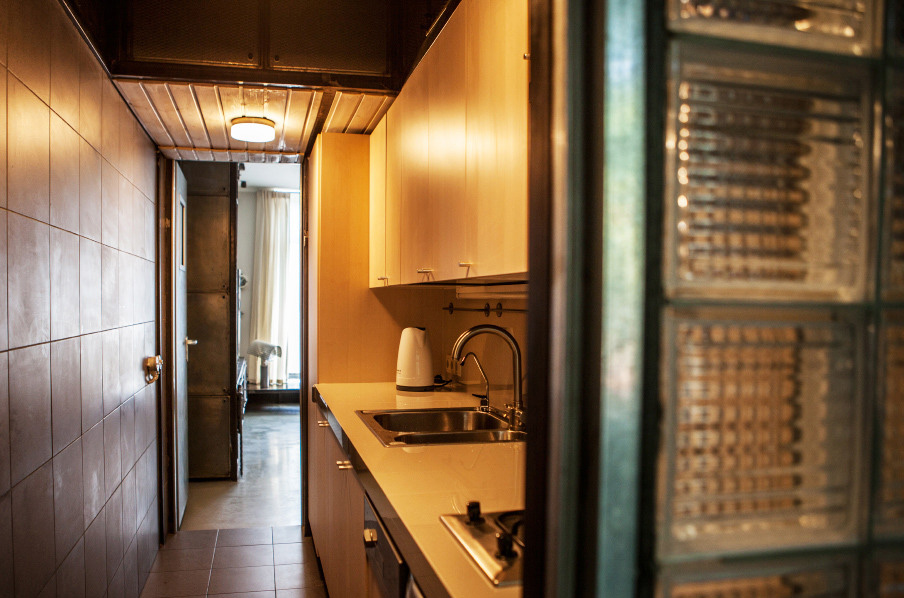